The Captain America love  does not  stop with Sheldon’s Trade Tuesday, as this month’s Cosplay Girl  shows us a very cute side of the Super-Soldier  that even the great  Steve Rogers never had. So enjoy our Q and A with Liz as she talks to us about her love of Captain America and Batman. 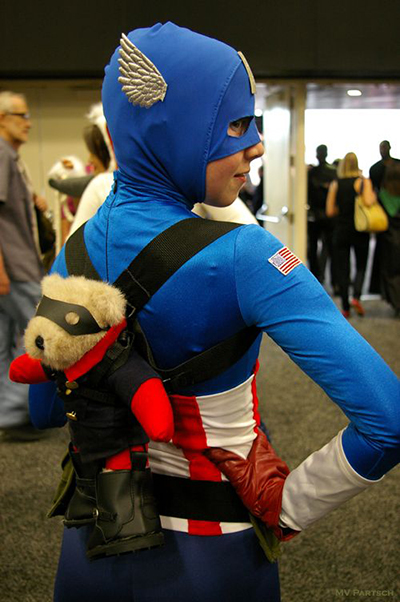 3. Do you read comics and if so what do you like to read?
I don’t read a huge range of comics… mostly Batman and Captain America, and other odd comics that my dad reads. I pick up stories outside the main universe, too, like Watchmen. Normally I don’t follow the main storylines but I’ll pick up contained graphic novels that look interesting. My favourite comic of all time is Arkham Asylum, by Grant Morrison and Dave McKean.

4. What is your favorite comic book character?
Favourite character” is a hard one! Batman was my first, from the animated series I’d watch as a kid, in the mornings before school. His universe will always be my favourite but I think I can connect the best with Captain America. I really have a soft spot for the Riddler, too.

5. What are your favorite artists or writers?

Has to be Jeph Loeb and Tim Sale – they work so perfectly together, and they’re really nice guys in real life. A few cons ago, I met Jeph for the first time and found out that he was doing autographs for free, and that he would be staying at his booth until the line was gone – even if it ran for hours, until the end of the day. I was really humbled, and I remember it every time I see him at a booth. Tim is really down-to-earth, too, and his artwork is just fascinating and beautiful to look at.

6.What got you into cosplay?
I am not really sure – I had my first homemade costume when I was about 3 or 4; it was a little Batman suit. The first time I made a costume myself was when I was 15, and it was my first Harley Quinn suit. I remember that I wanted a Halloween costume that was different from everyone else’s, that I could really connect with and act out. Since then I’ve remade the suit, but it still fits me and I’ll still keep it in my closet.

7.If you do more then one character which one is your favorite and if you only do one do you have some ideas for more costumes?
I do Harley Quinn and Captain America. (I’ve also got a black full-body suit – a zentai – that I didn’t make myself, but it’s fun to wear clothes over it and go out in public and scare people!) I don’t have a favourite out of either of them, because they both allow me to “act out” different parts of my personality – Harley is a bit more wild and over the top, and Cap allows me to be more stoic and reserved. I try to stay in character when I’m in costume, because then I become more of a character rather than just a person wearing something that looks pretty. A lot of people think that costuming is about wearing an outfit, but I think it’s a lot more than that. As for the future… my next costume is a total secret – only my closest costumer friends know – but I will say that it is from a cult phenomenon that anyone at a convention would recognise, and I have never seen it done before. I’d love to do a Pink Power Ranger (the original version), too. 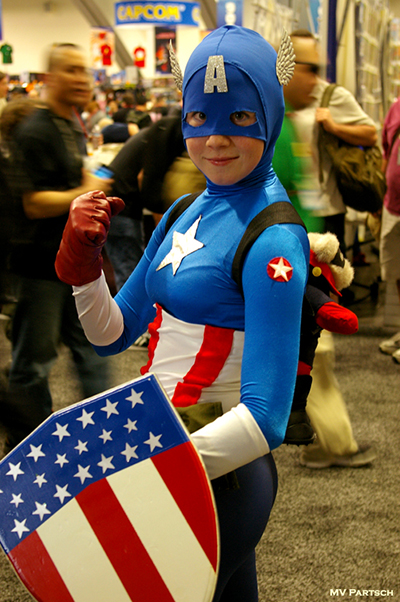 8.How long does it take for you to make a costume?
It depends on what the costume is and how much work needs to go into it, honestly. My first Harley suit was about 3 weeks, not including planning; my current Harley took me easily at least 2 months, not including the half a year I spent brainstorming ideas. Harley #2 was also the suit that I learned how to use a sewing machine on, so I had to learn new tricks, too! Building Cap took a few months back in 2006 and was a complete spur-of-the-moment thing. One day I woke up and I decided I wanted to be Captain America; I planned to have it done for that year’s 4th of July but I wasn’t able to put the whole thing on until August. And, of course, I modify my costumes here and there – some of my friends may have noticed that my Cap boots have changed significantly and over the years I’ve added a little thing like a belt, or a sidekick! I like to have one new thing at every convention, if possible.

9.Have you met any of the artists or writers that your costume is based on their work ?
I’d really like to stress that my suits aren’t based on specific artists’ works, but rather my own design. I do sketch everything out ahead of time and plan the fabric, sewing, and pieces extensively. There are a lot of artists who do fantastic renditions of both characters, but ultimately I want the suit to be something that came out of my own head.

10.Do you buy any toys, bust and etc  based on some of your favorite costumes ?
I do! When I’m at a con or a comic store, sometimes I can’t resist buying a little Harley or Cap figure. I really like the smaller figures, rather than the huge busts. Small figures can go anywhere in my house – busts are a little harder to find room for.

11.So do people know you dress up like a comic book hero on your free time ?
My friends know, because they dress up with me sometimes. I try to always have a handler – someone not in costume, who can help maneuver me/us through a crowd or can take behind-the-scenes photos or video. When you’re at a large convention, this can be essential, but it’s important at smaller gigs, too, like a parade.

12.What is the funniest thing that has happened to you at a convention?
At SDCC ’08, I was walking to the Masquerade line, and a large group of flamboyant gay guys stopped me for a bunch of pictures. They really liked my boots! The funny thing was that I wasn’t sure how to respond to them because they were all talking to me at once. It was great; they were really nice and I got to admire their costumes as well – two of them were dressed like War Hawk and Peace Dove. The security guard eventually came over and asked us to stop disrupting the flow of traffic – oops! Turns out we had been blocking the whole walkway.

13.Do kids come up to you and think you are the real life character?
Yes! The wonderful thing about the Captain America suit is that it’s instantly recognisable to kids. It’s really cool when they come up and want to shake my hand. It’s a great feeling, to make them smile. They tend to be more afraid of Harley – once I walked past a toddler dressed as Robin, who hid behind his dad’s leg. I felt so bad!

14.What do you like to do when you’re not costuming ?
I’m a full-time college student, so studying and school takes up the bulk of my time. I teach a Batman course (for credit! it’s legitimate!) at my university, UC Berkeley, with a good friend of mine. I like to play video games – Tomb Raider is my favourite, although Gears of War ranks pretty high up there, too. I like to read sci-fi, watch really bad movies, and just generally hang out and goof off with my friends. I like old-school games like Hide-n-Seek and Capture the Flag.

15.Great do you have a website or a myspace ?  So people can contact you ?
My website is at http://www.myspace.com/ltcamerica . I always welcome new friends, whether you’re a fellow costumer or not. I try to respond to every message I get, and I appreciate that people find me interesting enough to start up conversations. I’ve made some very good friends through this costume thing, and I’m grateful for this opportunity to connect with all types of people. And if you catch me at a con, don’t be shy! 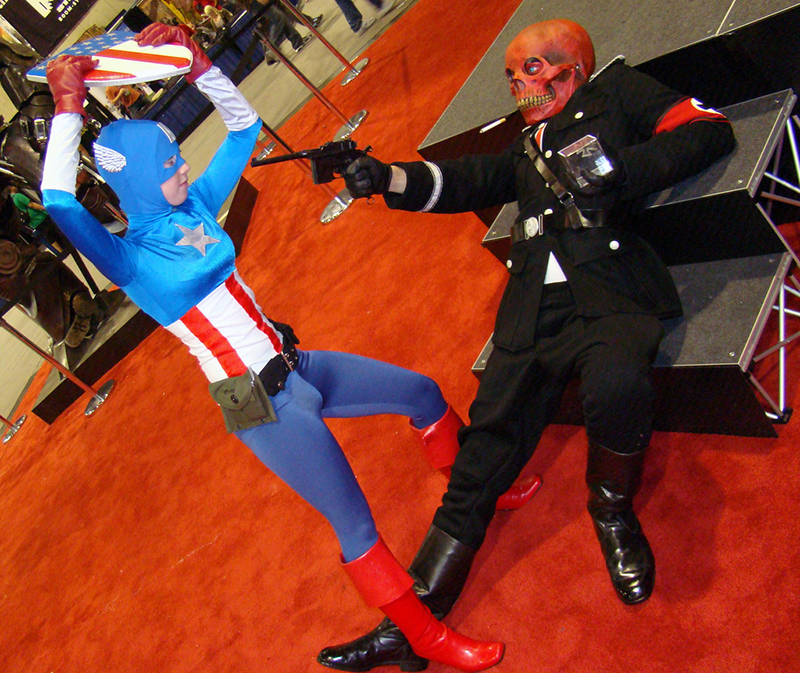 Thanks you one more time Liz.