“Not For Children” is the phrase that adorns the cover of several issues of the notorious adults-only comic book “Faust: Love of the Damned,” and I can safely state that a more appropriate warning has never been put on a cover before or since. The hyper-violent reality that the characters of “Faust” live in scales heights of bloodlust and depravity that I can only assume is completely unheard of and unseen by the majority of comic readers.  The extreme sex and violence in this book are not mutually exclusive. 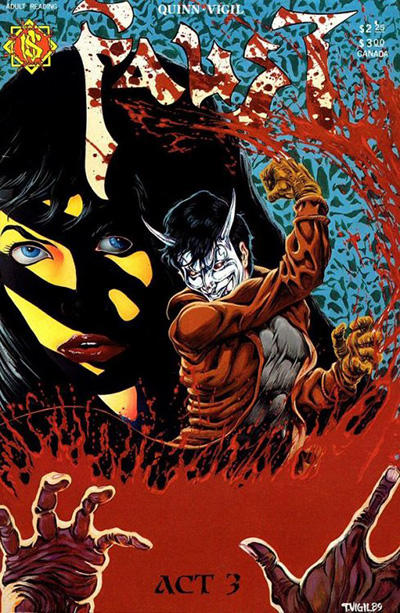 Poetically written by David Quinn and drawn by the supremely talented Tim Vigil, “Faust” tells the story of John Jaspers, an escaped mental patient with an artistic streak whose maniacal case is a source of fascination for psychiatrist Jade DeCamp. We come to learn that Jaspsers was once an assassin for M, the biggest crime lord of New York City, who also happens to be a Satanist and an extremely powerful practitioner of black magic. It seems Jaspers was betrayed by those he served and left for dead. Now he is on a brutal murder spree, hacking and slashing anyone in the way of his quest for revenge and redemption- with DeCamp caught in the undertow.

At this point I should mention the key instruments Jaspers uses to dispatch his enemies: long metal blades that extend and retract from metal casings attached to his forearms. This will forever cause people to immediately site the similarity here to Wolverine, a character whose weapons the creators of “Faust” will openly cite as an influence. But take my word for it; once you’re reading an issue of “Faust” there will be absolutely no doubt in your mind that you are not in the Marvel Universe, and that the similarity mentioned above is superficial at best.

Adult-oriented comics containing sex and violence existed long before the debut of “Faust” in 1988. Many underground cartoonists that emerged in the mid-to-late 1960’s such as Rory Hayes and the great S. Clay Wilson (a huge personal favorite of mine) explored similar areas. As extremely depraved as the work of some of these artists could be, they presented their stories in their own specific style that could range from exaggerated and psychedelic to downright cartoony. In “Faust” the almost impossibly detailed black and white artwork of Tim Vigil presents the action in an extremely realistic fashion, with every drop of blood and piece of meat perfectly rendered and on full display.

Alternately, since “Faust” began there have been quite a few horror comics that have exhibited strong violence in their pages- yet many seem to be looking for a different kind of response from the reader. The great Vertigo comic “Preacher” has plenty of gore, but often presents it’s carnage as either a hootin’ and hollerin’ good time or for a darkly humorous effect. In “Faust” the bloodlust is presented in a full-throttle hyper-real fashion that, while also providing a visceral rush, is meant to shake up the reader, sometimes badly. Truly horrific horror stories, no matter what medium they are being told in, are not meant to be comfortable to sit through.

I’d like to quickly mention the massive influence “Faust” has had on me personally. Although I voraciously read comics as a child, I mostly stayed away from them as a teenager. Instead I favored girls, heavy metal, and certain other things that shall remain nameless. In the very late 80’s I happened across an issue of the (now long gone) magazine “Comics Scene.” It was a Halloween issue and featured articles on Epic’s “Hellraiser” series, “Arkham Asylum,” and “Faust.” Intrigued, I went and sought all of these out. I loved them all and quickly began reading comics regularly again, “Faust” being the one that stuck with me most. To see something so unrestrained in the medium was shocking and eye-opening. Now, years later as I try to write my own stories, “Faust” is a constant reminder to not back away from one’s ideas, and that self-censorship (conforming your work so it is more acceptable to others) is an enemy of creativity.

There have been several spin-off’s of “Faust” (published by Avatar), but those willing to give this series a try are strongly recommended to go with the core, original series discussed here -“Faust: Love of the Damned.” To date thirteen issues have been published with the end of the series tentatively set for #15. They are easy to locate online, but understandably, many comic shops do not carry this title (I recently read that “Faust: Love of the Damned” is outright banned in the U.K.). This series is certainly not for everyone, but those with a taste for the extremely dark will be highly rewarded.