Let’s consider for a moment the most reviled of all forms of comedy: toilet humor. It’s something we’re all familiar with from an early age. Any child on a school playground is delighted to amuse his pals with a good pee or poop joke, or maybe simply by letting a loud one rip right in the middle of a school assembly. Let’s face it: the human body and its more odorous functions is prime comedy ground.  This applies not just to children, but also for those whose sense of humor refuses to grow up (i.e. just about everybody, myself included). Thankfully there are some comic artists who revel in wallowing in the filth and take full advantage of the fact that as we become adults our version of good toilet humor will only get more sick and twisted, as it now encompasses plenty of sex, violence, racism, and drugs. One cartoonist who understands “adult” toilet humor perfectly is Johnny Ryan, an absolute master at presenting just how low lowbrow humor can get.

Ryan is the creator of “Angry Youth Comix,” any issue of which is almost a guarantee that, unless you are an avid reader of underground comics from the 1960’s forward, is going to be the most disgusting thing you’ve ever read. To illustrate this point I went into my collection and randomly pulled out the first issue of Ryan’s work that came up. It ended up being “Angry Youth Comix” #13. The first story features the character Boobs Pooter who explains that a good way to pull pranks on people is to first blow your brains out (which he does). Then, as a small ghost, jump into the body of a woman without her knowing and masturbate into the back of her mouth as she’s talking to her best friend. I’m going to stop here, but will say that the above is easily the least offensive parts of the story. 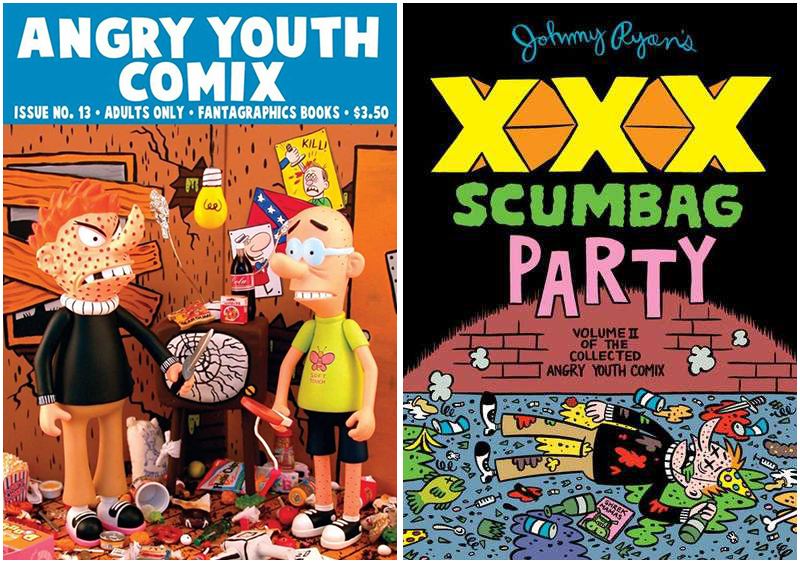 I met Johnny Ryan at an Alternative Press Expo several years back and was surprised to meet a well-dressed, clean-cut, very respectable looking young man. My friend Penelope, a very big fan of Ryan’s comics, later remarked: “He looked like a bible salesman!” Her statement rang true which makes it even funnier that, when I asked him for a sketch, he drew Loady McGee holding a huge, dead, maggot infested rat by the tail and asking someone (off page) to “C’mere and get a whiff of this!”

Obviously this stuff is not for everybody, but for the less easily offended, this is fall-out-of-your-chair-laughing comedy hi-jinks of the highest order. The material is even loved by many “high-brow” cartoonists who themselves are sometimes mercilessly made fun of in the pages of “Angry Youth Comix.” Johnny Ryan’s comics, collections and sketchbooks are published by Fantagraphics.