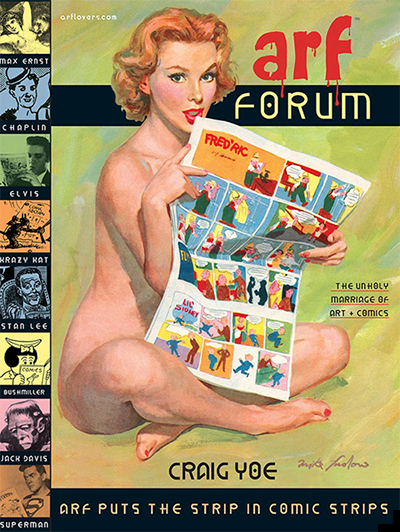 There are many comic collections and anthologies that champion comics’ relatively recent acceptance as true and serious art. The only potential problem is that many such volumes invariably become a bit stuffy and academic, forgetting that a primary function of reading comic books is that the experience should also be a fun and entertaining one. One sequential art historian who never lets us forget this point is the incomparable Craig Yoe via his series of eye-popping “Arf” books. To date there are four volumes: “Modern Arf,” “Arf Museum,” “Comic Arf,” and the volume spotlighted here “Arf Forum.”

Craig Yoe is himself an accomplished author, designer, cartoonist and the head of the highly successful YOE! Studios. With the books mentioned above, he never lets us forget the not so tenuous link between artists of the past with the wide parameters within which comic art resides today. In “Arf Forum” the far ranging visual cornucopia presented veers from demonic Henry Heath engravings from the 1700’s to turn of the last century caveman gag cartoons.

These are followed by Dadaist Max Ernst collages that, in concept, are seen as a forerunner to the graphic novel, and a wacky 1950’s comic featuring the canine character “Harry Hotdog” which is itself a lampoon of modern art. If having all of this and much, much more under one cover sounds as if it is approaching visual and conceptual overload it is, but in the very best possible way. Yoe’s incredible talent for layout and design shows on every page and the overall visual impact of reading an “Arf” volume is mind blowing to say the least. This is truly whacked-out eye candy for the discriminating comic fan. All titles in the “Arf” series are both published and available from Fantagraphics books.