Today’s comic book artists working within the mainstream may not always be consciously aware of just how little restrictions are put on their work. When the human body is represented, there isn’t always a whole lot left to the imagination even though the characters are fully clothed. A good example of this is the slick art of Guillem March on the current series Gotham City Sirens. The central characters look less like costumed villanesses and more like nude women whose bodies have been painted. Cartoonists of the past had to exhibit much more discretion in their work, due mostly to the nefarious comics code, and leave the risqué stuff for a much smaller audience, if not just for themselves completely. It is hard to imagine artists like Carl Barks, Joel Shuster, Rube Goldberg and Bob Kane drawing anything even remotely naughty, but the proof is not only out there, but now collected in one highly unusual and entertaining tome titled Clean Cartoonists’ Dirty Drawings. 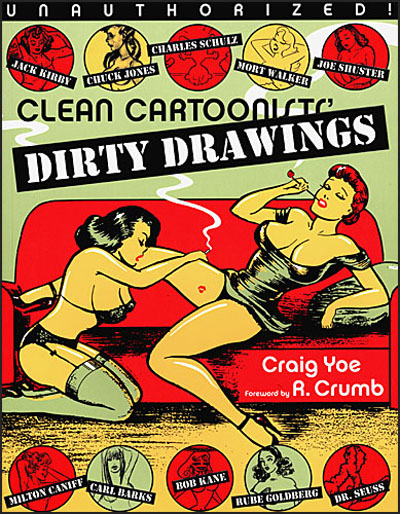 In Clean Cartoonists’ Dirty Drawings, comic creator and historian Craig Yoe (of the previously profiled Arf books) has assembled a cornucopia of vintage naughty imagery, the majority done in the recognizable signature style of the particular artist being spotlighted. Seventy cartoonists are featured in all, but the total number of surprises in this book numbers much higher. Carl Barks is known as the preeminent comic artist and illustrator of all things Donald Duck related, but outside of those close to Barks, who knew he had such a knack for drawing the female figure?

Absolutely without question the biggest eye-opener in the book are works by Superman co-creator, artist Joe Schuster, who resorted in the early 1950’s to illustrating an underground magazine titled Nights Of Horror. The non-stop cavalcade of torture, drug use, S&M and depravity depicted in his wordless, cleanly executed illustrations are made all the more uneasy in that many of the people committing these acts look more than a little like Clark Kent, Lois Lane, Jimmy Olsen and Lex Luthor. Though several of these images are in the book discussed here the topic is covered in much greater depth in Yoe’s newest book Secret Identity: The Fetish Art Of Superman’s Co-creator Joe Schuster.

Despite all the surprises there are a few things in Clean Cartoonists’ Dirty Drawings that come as no surprise at all. The late comic art master Wally Wood, who is very widely considered one of the greatest artists in the entire history of the medium, was very known for the borderline pornographic material he produced in the decades following his 1950’s E.C. glory days. In Yoe’s book is the infamous, very filthy minded mash-up of Disney character’s doing thing we can only hope never passed, even for a moment, through Walt’s mind. Given the amount of “dirty” drawings Wood professionally produced I don’t think we can really place him too firmly in the “clean” category.

It is very important to mention at this point that, although the images  that the majority of the illustrations in Clean Cartoonists’ Dirty Drawings really aren’t all that dirty at all. In fact, what could easily be seen as the most adult image in the book is supplied by Robert Crumb in his introduction. Many of the images displayed are nudes that are either anatomically accurate and beautifully rendered such as those by Flash Gordon artist Alex Raymond, or cartoony and playful like those by Beetle Bailey creator Mort Walker. By the way, if you’ve ever wondered what Walker’s sexpot character Miss Buxley looks like with her uniform off, this book gives you your chance.

Clean Cartoonists’ Dirty Drawings is another endlessly fascinating entry in Yoe’s fast growing list of books concerning the lesser-known corners of comic history. If you have an interest in good girl art, censorship issues, obscure cartooning arcana, or simply just want to see an Adam Hughes drawing of Wonder Woman with her boob hanging out, then this book is indispensable. Clean Cartoonists’ Dirty Drawings is published by the fine folks at Last Gasp of San Francisco.