Like most kids (boys especially) I was drawn to anything that had dinosaurs in it.

Movies like KingKong, The Valley of Gwangi, One Million Years B.C. and The Land That Time Forgot were mandatory viewing when they would pop up on Saturday afternoon television (this was back in the pre-historic days shortly before cable and home video). Comics like Jack Kirby’s Devil Dinosaur and The War That Time Forgot were read and reread endlessly. Even though I loved anything even remotely monster related there was a difference when it came to dinosaurs because these beasts were real. Though their time had passed, these giant creatures once stomped, fought, foraged and killed on the face of the same planet that I reside on. Knowing this as a kid made dinosaurs much more special than their fictional counterparts like Godzilla and reinforced the wish that I could take a peek into their ancient world and see what their lives were really like. Another such “monster kid” who never outgrew his love of all things dino is legendary comic artist Stephen R. Bissette and this is very much proved by his brilliant (and as of yet unfinished) comic series Tyrant. 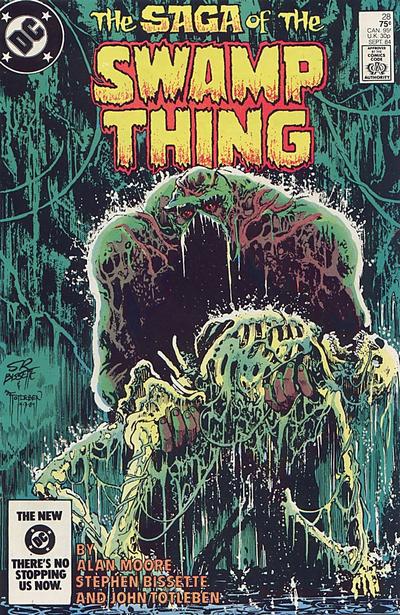 Stephen R. Bissette is widely regarded as perhaps the greatest horror comic artist of his generation. His work, with inker John Totleben, on the Alan Moore run of Saga of the Swamp Thing completely redefined the definition of, and possibilities for, the modern horror comic. By abandoning the comics code and presenting sophisticated stories aimed at literary minded genre fans, the fading DC character was saved from his god-awful Hollywood interpretation and reborn into what are now considered amongst the very best horror comics of all time. Bissette played a crucial role in the creation of the character John Constantine and also helped lay the early essential groundwork for what would eventually become the entire Vertigouniverse. He also published the award winning horror anthology Taboo. An unapologetic, adults-only, razor sharp collection of top comics talent, Taboo spanned ten collections and was the original home of Alan Moore and Eddie Campbell’s From Hell. Yet despite the above achievements, Bissette’s career defining masterwork and the one I feel he clearly has the most affection for is his Tyrannosaurus Rex birth-to-death tale Tyrant.

Self-published under Bissette’s own Spiderbaby banner from 1994-96, Tyrant strives and completely succeeds at presenting a story set in the pre-historic world in the most realistic manner possible. The first of the four issues (to date) opens in the late cretaceous period in the area of what is now Alberta, Canada. We are introduced to the daily struggle for survival amongst various levels of inhabitants, from the air-born Quetzalcoatlus to the scavenger Chirostenotes (or “eggsucker”). These mini-dramas come to a stand still however, as the birthing pains of a female T-Rex laying her eggs reverberates through the valley. This sequence, which encompasses the last several pages of the issue, perfectly illustrates the incredibly realistic tone of the series as a whole. Dinosaur stories, regardless of the medium, will almost always interject some manner of the fantastical into the mix be it time travel or, just as unlikely, the presence of cavemen (?) into the dinosaurs’ environment. Here in Tyrant there is a panel depicting when the first time mother T-Rex recognizes the smell and taste of her own blood on the freshly laid eggs. She understands then that these are not food, but something much more important and that small, yet intensely detailed moment puts the reader so squarely and vividly into that ancient world, it becomes more dramatic than any dinosaur attacking a modern city story could ever hope to be.

Issue #2 proves even more fascinating as the series of tiny ecological disasters that befall insects, spiders and other smaller inhabitants of the land as a result of the T-Rex merely walking through its domain are examined in jaw-dropping detail. This is juxtaposed by the renewal effect the decomposing carcass of the T-Rex’s latest kill has on the environment. Tyrant #3 proves itself to feel simultaneously experimental and highly scientific at the same time as the entire installment, save for the very last pages, takes place within the insulated, self-contained universe of a T-Rex egg. The minutely detailed panels makes one realize that it is a small miracle that any living creature, regardless of species, is able to complete the cycle that begins at the second of conception and ends at the moment of birth. I should note that although Bissette did tremendous painstaking research in preparation for this project to insure scientific accuracy, there are moments that are speculative. We may never know exactly how dinosaurs developed in the embryonic stage, but Bissette’s artistic interpretation of the event is so carefully rendered and scientifically based that it is easy to believe that this is as close to witnessesing the actual event firsthand than we will ever see. Issue #4 is very centered on dramatic action as we again see the trials and tribulations of the previously introduced eggsucker in his quest for a meal. The far off commotion of the T-Rex brood struggling to free themselves from their eggs lures the scavenger to the nest. He passes the decomposing body of the T-Rex mother’s previous kill and we see the rotting husk is now teeming with life. At the nest the new mother’s maternal instincts kick into gear: she does what she can to aid in her offspring’s birth as the eggsucker moves in for an easy newborn meal. 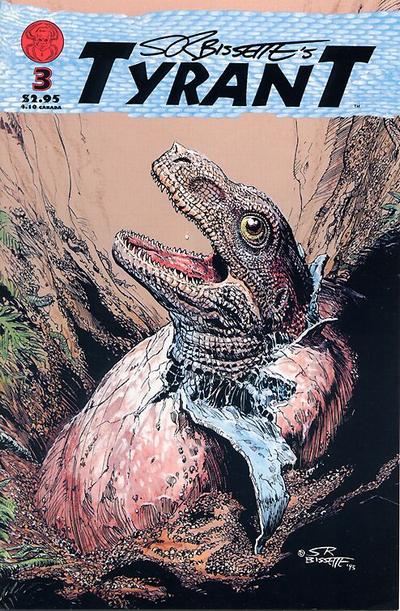 So ends the last published issue of Tyrant from early 1996. The story of the male T-Rex we are meant to follow from gestation within the egg to the end of its adult life remains unfinished. To understand the reason for this requires a bit of history into the murky world of the 1990’s comics biz. As the various comic book distribution avenues available to publishers fell apart in the mid-1990’s, spurred in no small part by Marvel bypassing said avenues and controlling their own comic allocation internally, many small press owners could no longer afford to put out their books. As a result, the other three biggest companies in the industry (DC, Dark Horse & Image) signed exclusive contracts with Diamond Distribution that in turn led to the demise of their rival Capitol City Distribution. Meanwhile, Marvel had slowly driven itself into the ground due in no small part to the business practices of Wall Street junk bond king Ronald O. Perelman who acquired Marvel Entertainment Group in 1989. By 1997, Marvel filed for Chapter 11 bankruptcy, which sounds even more astonishing given that only 12 years later the same company just sold for $4 billion to Disney. Through all this the biggest losers of the 90’s comic book fallout were the small press houses. Amidst all the turmoil, publishers like Spiderbaby had little to no way of getting their comics to readers and significant books like Tyrant were rendered extinct.

In retrospect we can see how Tyrant could no longer continue at the time of its creation, but I find it astonishing that no other company has stepped up in the years since to put out the title under their banner. The subject matter is one that is always of interest to the public: dinosaurs. Perhaps much more important is that this particular comic is solely created not by an unknown or rising star, but by an acknowledged comic art master who is an integral part of some of the most ground breaking (not to mention award winning) comics of the last 25 years. I believe Fantagraphics (whose co-founder Gary Groth has a letter published in the pages of Tyrant calling it Bissette’s best art yet) would be a wonderful home for the book. The subject matter may at first seem to be at odds with the majority of their line, but Fantagraphics has always been more concerned with the quality of the particular work rather the genre it may belong to. For decades they have been at the forefront in this country for pushing the medium forward and getting comics to be recognized as the important, legitimate art form that it is and I think that Bissette’s masterwork would fit nicely in their catalog. In recent years Image has moved past having just the super-heroics that established their company into more indie flavored work and Tyrant could be a nice gem for their line. Dark Horse could be the most appropriate home for Tyrant of them all considering their recent output of compilations and merchandise for the dinosaur related title Turok. I am not sure if there is anyone reading this right now who is in the position of putting forth the idea of bringing Tyrant back to life, but I am quite certain that the comic fans who raved about the book 13 years ago have not gone away and would be back to see the series go on along with many new readers in tow.

Of course this is all wishful thinking on the part of an admitted fan of the artist in question. There is always the outside chance that maybe Bissette may not want to pick up the story again. In a recent interview in The Onion A.V. Club he discusses the creative mind space he has to be in to work on something like Tyrant and whether he could find that space again. I, for one, believe he could especially if given the opportunity and help that comes without having to deal with the tricky world of self-publishing. The history of comics is filled with unfinished sagas and epic stories that were cut short or cancelled before having a chance to bloom on their own terms. It would be a shame if that were the same fate for Tyrant, a book with unlimited appeal to the thinking adult who’s really a dinosaur loving kid at heart.