Putting aside the fact that the comics themselves featured many of the same classic characters we’ve known all our lives, the often-forgettable releases from Marvel in the 1990’s bares little resemblance to the company’s output today. When you factor in the abolishment of the Epic line, bad business practices leading to a glut of material (over 100 titles at one point), and their top name creators jumping ship to launch the instantly successful Image, you get a titan of the industry not exactly in the midst of a new golden era. We all may remember how blown away we were when Marvels by Busiek and Ross was released, but how many other things from that period can be spoken about with that kind of reverence today?

Nonetheless, by late in that decade (and continuing right up to today) there was a very tangible change happening, spurred on by the output of top-notch writers who had more than proven their abilities to turn out incredible, genre bending work at other publishing houses. These would include, but certainly are not limited to, Garth Ennis, Grant Morrison, Mike Allred, Brian K. Vaughn and the writer whose early work I’d like to mention today – Ed Brubaker. 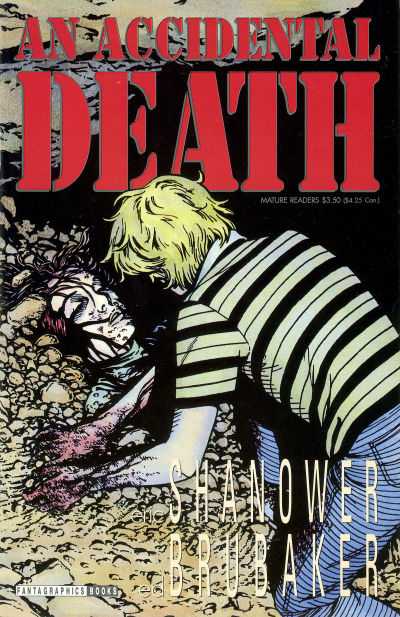 The best writer of crime comics of his generation, Ed Brubaker has received an avalanche of much deserved praise from both Marvel fans and the comic press for his work on such titles as Daredevil, The Immortal Iron Fist and, most notably, Captain America. Yet still, I wonder if Brubaker is having the most fun when immersed in the world of hard-boiled crime and seedy noir, a world where you can almost smell the sweat and alcohol exuding from the pores of doomed characters half-knowingly pursuing their own demise. Characters in books like Criminal and the Vertigo mini-series Scene of the Crime strike the reader as much more real than the typical pulpy archetypes.This quality greatly distinguishes Brubaker’s output from the pack of other creators who are beating the overly familiar noir genre to death with its own clichés in this, the post-Sin City comics environment. What makes Brubaker’s talent all the more impressive is that it doesn’t seem learned over time, but there from the beginning of his career in full force, and a superb example of this is his early story An Accidental Death.

Serialized in Dark Horse Presents issues #65-67 in 1992 and illustrated by the supremely talented Eric Shanower, An Accidental Death is set on an American military base in Guantanamo Bay, Cuba in 1978. Teenagers and best friends Charlie and Frank pass their days as interestingly as they can in the self-contained and army manufactured Americana of the foreign island they live on. Things begin to change with the arrival of a new family with pretty teenage daughter Jennifer in tow. At first the boys see the newcomers as a source of amusement kept solely between them, as two of the family members are midgets. This changes drastically one evening when, while spying outside her home, Charlie and Frank see Jennifer undressing in her room. Frank quickly becomes obsessed with the girl who dismisses every clumsy approach he makes at her. One evening an emotional Frank, unable to accept the truth from Charlie that Jennifer will never be his, insists he’s wrong and says that he’s going to her house immediately to ask her out. Later that night, Frank appears at Charlie’s bedroom window wide-eyed, badly shaken and covered in blood.

Frank leads Charlie to Jennifer’s body, explaining that they were making out in a tree when she fell and cracked her head open. Frank, fearing the consequences of his rigidly strict and emotionally abusive military police father, convinces Charlie to help him hide the body. As the days pass and the search for the missing girl consumes the town, Charlie begins to wonder if the accident described by the progressively unstable Frank happened as told or was something else entirely.

An Accidental Death has the ability to shake the reader up due to the fact that, although the story is fictional, the world it is set in rings very true – one with real consequences for all of those involved. The first person narrative is told with such depth and realism and rings so emotionally true that it is hard to believe this is a work of fiction. Brubaker’s story sounds more like a friend relating an event that happened to them when they were growing up, an event that changed their life forever.Everyone, no matter what your background or where you grew up, has probably heard or know of a story not entirely unlike the fictional one Brubaker tells here. Violence, and the potential for lives to be shattered forever by it, is a very real possibility for us all whether you come from a small rural town, an isolated military island or the worst neighborhood in a big city.Anyone with any sense of humanity instantly recognizes how disturbing real violence is and when a work of fiction can induce that same reaction in us, you know you have experienced something unique.

An Accidental Death was later collected into a single comic by Fantagraphics in 1995. It is currently available at their website for $0.99. Let me apologize ahead of time for repeating myself, but I’d like to state that again. Published almost fifteen years ago, this hard to find, important, brilliant early work by one of the most acclaimed modern writers in the entire comic industry is available for 99 CENTS. Deal of the year for sure for those who decide to jump on it.