The widespread popularity and availability of Marvel in the 1960’s, 70’s and 80’s (it seemed like almost every store had a spinner rack in them) meant that any comic loving kid who grew up in those eras more than likely read copious amounts from those now classic years. Some of those kids grew up to become today’s top independent creators, and though their usual output shares little resemblance to the traditional superhero themes of the comic book publishing giant, they seemed to have gleefully accepted the chance to contribute to an anthology featuring the Marvel characters we all grew up with (and will maybe grow old with as well). The re-imagining of the Marvel universe by the best of the alternative comic world makes for one of the years top releases: Strange Tales. 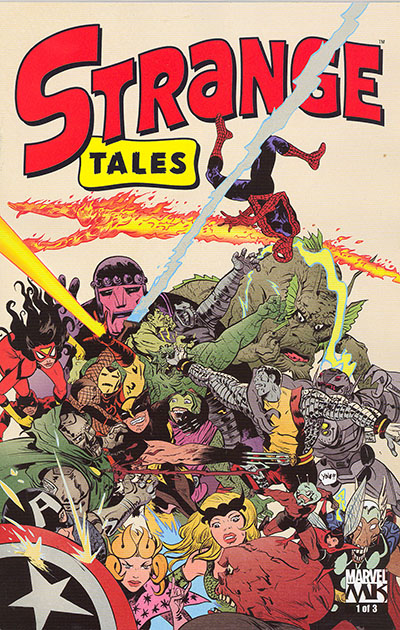 Published under the Marvel Knights banner, Strange Tales #1 (of 3) features such off kilter luminaries like Johnny Ryan, Michael Kupperman, Paul Pope, Jason and Peter Bagge and gives us the chance to see our old Marvel faves partaking in activities we never thought them capable of. My personal favorite (supplied by Ryan) is of Peter Parker catching Aunt May buying porno. Sweet old May must be quite a lively gal because she isn’t just getting one adult DVD, goodness no, she needs to purchase a HUGE STACK of smut to satisfy herself. (Thankfully the satisfying herself part is not shown in any way.)Nonetheless, for me the most head-spinning thing in the issue is the inclusion of a Spiderman story by Japanese art star Junko Mizuno. Junko is well known in the Pop Surrealism world for her demonic images of violence, drugs and sadism that is presented in a cute-as-a-button Japanese style. Though the content of her story here, Welcome to the Spider Town, is considerably toned down from her regular output, it is still bizarre to see her aesthetic so easily applied to a character like Mary Jane.

Another major hoot is to see absurdist comics master and Tales Designed To Thrizzle creator Michael Kupperman do his take on Sub-Mariner and Dash Shaw’s delirious version of Doctor Strange.

There is really so much rich imagination, eye-popping art and flat-out fun in the pages of Strange Tales that the only way to really experience it is to read it yourself. I feel that the contributors to this book have a very real affection for these classic characters, as most of us do, and it really comes through in their respective stories. This is one of the most entertaining comics I’ve read this year and I am very much looking forward to the next two releases. Whether you read only independents, only Marvel, or a little bit of both makes little difference. This comic is for everyone with a good sense of humor, an appreciation for originality and a belief that their favorite hero can still save the day, no matter how inconsequential or monumental the task at hand may be. After all, in the world of superheroes even feeding your dog can have epic consequences. Don’t believe me? Just read Strange Tales #1 and see for yourself.