There’s something fascinating about seeing your favorite hero doing what they do best, but in a radically altered setting or environment. A big favorite of mine as a kid was What If? from Marvel. In (somewhat) more recent years it’s a real kick to see what DC creators do with the various Elseworlds releases. One that always springs to mind is Gotham By Gaslight in which we see what Batman would be like if he lived and operated in the late 1800’s. Pretty far-out to be sure, but how is the reader to react upon seeing the caped crusader as Raskolnikov, the down and out homicidal elitist in Dostoevsky’s towering classic of Russian literature Crime and Punishment? One way is to laugh out loud and that is exactly the way I reacted to that story and the many others in R. Sikoryak’s new book Masterpiece Comics. 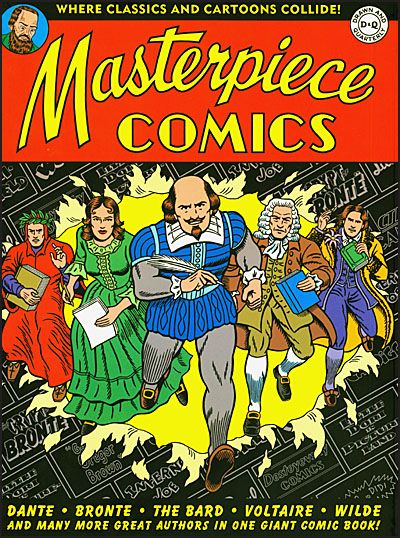 Sikoryak’s knockout mash-ups of the worlds of four-color comics and those of great literature have previously appeared in top-tier anthologies like RAW, Snake Eyes and Drawn and Quarterly. Even in these “best of the best” collections, Sikoryak’s stories always come away as being amongst the most memorable. To have them all under one cover really brings home the point that the worlds of high art and supposedly throw away low-brow culture have more in common than you would think. In Masterpiece Comics it as if these two art mediums were put into the transporter pods from Cronenberg’s The Fly, fused inseparably together at a DNA level, to emerge out the other side with no idea the change had taken place.

Consider Charlie Brown and his nearly ceaseless melancholy and negative world view with the doomed and horribly suffering Gregor Samsa, the salesman who awoke one day to find himself transformed into a giant insect from Kafka’s The Metamorphosis. Though their particular circumstances and settings are very different, they actually begin to seem one and the same, which of course they are in Good Ol’ Gregor Brown. If the term had been around in Kafka’s day I can picture Samsa, upon waking and seeing his predicament, to exclaim “Good Grief!”

Similarly, Emily Bronte’s gloomy Victorian drama Wuthering Heights fits quite nicely through the filter of a classic E. C. Horror story. This comes complete with the always observing maid of the 1847 novel filling in nicely for the constantly commenting Crypt Keeper who tells the story so earnestly that every sentence ends with either a question mark or three dots to entice the reader to keep going…

Still there are other combinations that seem to be at such odds with each other that it is just too bizarre to not elicit instant laughter. Take Mary Worth, the long running comic strip character that always has her nose all up in everybody’s business and recast her as a contemporary Lady Macbeth in Macworth. After she prompts “Mac” to commit murder he deliriously exclaims “Will an ocean wash this blood from my hands!?” She counters in all her trademark homespun wisdom with “Honestly! A little water will do!”

What may be the two best entries in the book also feature two of the most recognizable characters on the pop culture radar: Garfield and Batman. In Mephistofield the lasagna-loving tabby is recast as the soul hungry Devil manipulating the ever-needy Jon Arbuckle/Jon Faustus. I always felt there was something a little diabolical about that cat, what with the way he’s always kicking poor Odie’s ass up and down the street.

The aforementioned Dostoevsky/1940’s Batman mash-up features what may be the funniest image in the book. In it Batman, having already murdered twice, sits in quiet contemplation as a male prostitute (Robin, naturally) reads from the biblical book of Lazarus in an attempt to encourage the Dark Knight to turn his will over to God.The sequential art form almost never, and I mean ever, reaches such a height of utterly profound absurdity.

Of course using classic literature as a starting point for comedy is not a new idea. The key ingredient that really makes Sikoryak’s book such a success is his ability to perfectly mimic every genre and style of comic art he tries his hand at. Every pane in the book looks like it comes directly from the pen and brush of a Jerry Robinson, Windsor McCay, Bob Kane, Joel Schuster or Jim Davis. The writing and the premise will set you up, but the astonishing comic era-accurate art will knock you out. I had the pleasure of meeting Sikoryak at this year’s San Diego Comic Con and asked him how he creates art in the style of others so precisely. Smiling, he replied, “It takes a really long time.”

Masterpiece Comics is published by Drawn & Quarterly and makes it to the very short list of the best books of the year. Without a doubt there will be nothing else like it this year or probably any other for the foreseeable future. A beautifully produced, perfect book for both comic fans and literature junkies alike.