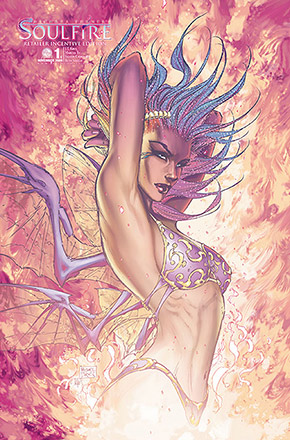 It’s really hard for me to write about things I like. I feel like it’s easier to talk about things that are wrong with a book.  My first start of this review read “this book is neat, i really think you should read it.”  In truth, that’s gonna be the heart of this review but I’m going to try to elaborate just a bit more.

For those of you not in the know, Soulfire is a comic about the resurgence of magic in the year 2211. It’s one of Michael Turner’s great contributions to the world of comics as well as a flagship title from Aspen Comics.  It also happens to be my favorite comic book ever. I know what your thinking, it’s easy in the moment to say that a comic is your favorite, but trust me, I’ve thought this out, I even filled out a facebook top 5 about it, so it’s official.

Needless to say I am excited that volume 2 is kicking off (other than Issue 0) with issue 1 this Wednesday October 14th. What’s even more exciting is the early copy I picked up at Long Beach Comic Con.

My first thought of course was bringing you a Dana-eyed view of the book you can all pick up this new comic day.  Let’s recap shall we?  Volume 1 told the story of Malikai, a boy living a less than extraordinary life, who is approached by the mysterious Grace, who gives him a “come with me if you want to live” type speech and of course he goes,  his friends Sonia and Pj following.  Not to give too much away but fights ensue, lessons are learned, and Mal may of may not have fulfilled his destiny as the Samusara – the bringer of light.  In other words he’s supposed to be the guy who brings magic back to a world that has long been without it.  Ok – SPOILER TIME – he totally succeeds, volume 1 ends in triumph with magic making it’s comeback.  If you want to read for yourself issues 0-5 are collected in the Soulfire Volume 1 TPB and issues 6-10 will be collected in hardcover later this month.

Volume 2, is more or less the morning after story.  Well, not exactly, the story starts in 2212, which is a few months after the end of the first volume.  While magic has been restored, it is not yet commonplace, and it is popping up all over (read Soulfire New World order for more on that).

We rejoin our group of friends in Sydney, Australia, where they are spending time enjoying the fact that they survived the epic events of the first volume and they take some time to just hang out.  One really enjoyable element in this volume thus far is the interplay between the characters.  In issue 0 we see Pj and Mal goofing off in the way only stupid young men can think up. While in issue 1 Mal and Sonia explore their blossoming romance (don’t worry kids it’s gonna stay PG, check out the upcoming J.T. Krul video interview for more on that).  We see a few sweet moment between the two as well as a sassy jealous moment that paints Sonia in a different light, still a fabulous light, just a different hue. I’m really looking forward to the character development, which was not as prominent in earlier issues, as it understandably took a back seat to action packed story.  With any luck we’ll still experience the urgency we felt previously sprinkled with the maturing relationships and growth in the characters.

Tip: If you read volume 1 and you want more insight into the characters read any of the Soulfire mini-series which were created to expand the story. Soulfire: Shadow Magic, which tells of Grace’s past is a favorite of mine.

In addition to a first date (that we’ve seen) between our power couple, we also follow Pj, Benoist and Dylan as they travel to the Eighth Continent, a huge junkyard on the coast of Australia. When they get there they are met by a couple of dudes with ‘tudes riding around on the Aspen equivalent of Zords, pretty damn cool. While the kids are getting in their respective trouble, Grace is doing damage control, trying to ease the transition for the return of magic and at the same time setting up the story for what appears to be an x-men-esque statement about people not accepting the unfamiliar and unjust hatred.  Oh and did I mention Ranier, our big baddie, is plotting his next move?

As for the creative team, it’s really solid.  It’s hard, to say the least, to follow in the footsteps of an artist who is also the creator of the book, add in the fact that that artist was comics superstar Michael Turner and the task seems almost set up for failure.  However, when Turner passed away before the completion of volume 1, Aspen friend Joe Benitez stepped up to complete the last 3 issues and did a bang up job.  With volume 2 the pressure is on to follow these 2 fan favorite artists. The man chosen for the job is Marcus To (who you may remember from other titles like Fathom: Cannon Hawke and Soulfire: Chaos Reign).  To certainly is a rising talent,  4 pages into this issue we see a power shot of our female bad-ass Grace and it is breathtaking.  His sleek style really fits the feel of the book and his slightly older interpretations of  Mal and Sonia bring a fresh style to this franchise.  I cannot accurately compliment this art without also mentioning the Inks by Saleem Crawford and the Colors by Beth Sotelo.  I may be one of the only reviewers that feels the need to point out these often under appreciated artists but WOW, Marcus To’s art has never looked better.  Crawford’s sublime lines and Sotelo’s dynamic colors really enhance the magical feeling of this book.

And of course there’s the books writer, J.T. Krul.  Krul wrote the second half of volume 1 and I am glad he’s returning in that capacity.  You might recognize his name from his work on Blackest Night: Titans, or his story in the Justice League of America 80-page issue from a couple of weeks ago. As a writer I want to say he’s very subtle.  He doesn’t necessarily elaborate too much on a character or a dynamic within a group, but very quickly you feel the emotion behind the words.  I know no better complement to pay than to say he truly takes you to another world and makes you invest your heart in the characters.

Enough from me, pick up this issue and learn whether Mal and Sonia’s new relationship survives the issue, if the boys can escape the junkyard, and watch Grace and Ranier each work to prepare for the next chapter in the resurgence of magic.