Sequential Sunday: Key Moments From The History Of Comics

Playing fast and loose with histories both real and imagined can be fertile ground for dry comedy and offer opportunities for moments of real poignancy as well. Both are found in abundance in the new chapbook by Francois Ayroles titled Key Moments From The History Of Comics. Presented in a series of single panel cartoons, comic creators from the distant past and the contemporary present are shown in small scenes of inspiration and isolation, melancholy and triumph.

Some of the most affecting pieces in the book are ones that show imagined formative scenes from the early days of an artist. Much has been written of Peanuts creator Charles Schulz sharing many personality quirks with his key character, the much put-upon Charlie Brown. What biographers spend entire chapters mulling upon is condensed and stripped down to its emotional core via five words and a single illustration by Ayroles. 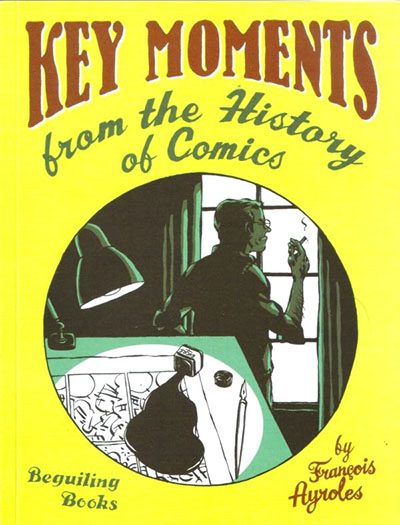 Another imagined scenario that seems entirely plausible depicts the brilliant Chris Ware as a young, melancholy boy sending a Valentine’s Day card to the often-unloved Charlie Brown. Ware is an artist very aware of the polarizing loneliness the world can have on us at times. That he as a child would feel such an affinity for the fictional Charlie that he would send him a card to let him know he is not alone in the world is an extremely poignant and touching image – one of the best in the book. It also says much about the profound effect art can have on us in our childhood and how it can later influence one’s own work as well.

While the above situations are fictional, others in the book are drawn directly from reality. In one panel George Herriman, creator of the pioneering strip Krazy Kat and considered by some to be the greatest cartoonist of all time, is depicted washing his dishes. At first this seems to be a gag in which the humor is drawn from juxtaposing a brilliant artist in the middle of a thoroughly mundane, everyday act. In fact there is no joke here at all: in a rare interview Herriman once admitted that he got his best ideas while doing the dishes.

One joke so effective that three variations of it are represented throughout the book (with similar captions) depicts five businessmen sitting in a stark, barren boardroom. The descriptions for the strips are as follows: “Mad is created,” “RAW is created” and “Heavy Metal is created.” My initial reaction was that this is some kind of undeserved slam against these legendary, genre-defining titles. After a moment though I realized that the witticism lies in imaging these ground-breaking comics, who have and always will inspire generations of writers and artists, being designed by a banal, corporate committee.It is an utterly absurd joke and one that works best through repetition.

My favorite page in this slim but idea heavy volume is also perhaps the most straightforward in meaning. In it Calvin and Hobbes creator Bill Watterson is being assailed on his homestead by ad men carrying armfuls of Calvin merchandise, truckloads of money trailing close behind. Defiant, Bill refuses their offers. The story of how Watterson fought his comic strip syndicate over whoring out his beloved characters to be turned into a multimillion dollar empire of cheap licensed novelty items is legendary.The highly amusing single panel distillation of Watterson’s commitment to preserving the integrity of his creation is very representative of the playful tone to be found throughout the pages of Key Moments.

For those interested you should act fast. Key Moments From The History Of Comics is published in a limited edition of 1,000 copies from Beguiling books. This is truly top-notch dry humor to whet the appetites of high-brow comic fans the world over.