Sequential Sunday: The Stuff Of Legend

For those who read fantasy comics, 2009 is proving itself to truly be a banner year with some of the quality genre material hitting the shops recently. First, there is the amazing continuing series Mouse Guard by David Petersen. Then we saw the phenomenal debut of Cursed Pirate Girl by Jeremy Bastian, which to me still stands as the best, and most beautifully drawn, title of the year. Now there is another comic to add to this imagination abundant list: The Stuff of Legend. 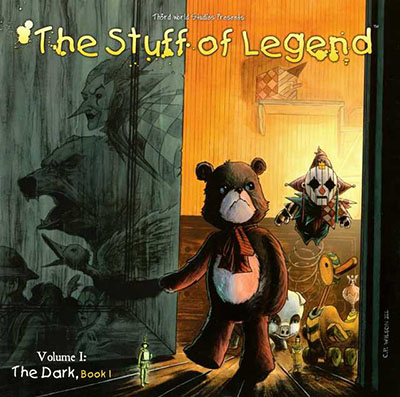 The first issue of The Stuff of Legend (written by Mike Raicht & Brian Smith with pencils by Charles Paul Wilson III) opens in the year 1944. Although the war in Europe rages on, in a young boy’s bedroom in Brooklyn all seems right in the world. This changes radically as the child is abducted by the ultimate and most feared of all nighttime phantasms: The Boogeyman.

After the boy is dragged into the void existing beyond his bedroom closet, the playthings that line his shelves spring to sentient life, shocked at what has happened to their master. A crackerjack team comprised of a toy soldier, teddy bear, ballerina, Indian princess, piggy bank, wooden duck, a jack-in-the-box, and the boy’s pet dog, quickly forms to stage a rescue. As they journey into the fully-realized fantasy realm known as “The Dark,” their bodies turn from toy materials to flesh and blood and they are subject to the mortal consequences that conflict and battle brings with it.

Though “The Dark” is ruled by the Boogeyman, he is not the only hazard the group will have to confront. The villain has an army of bitter and discarded toys that once belonged to the boy and they mean to stop the heroes at any cost.

As Issue 2 opens our group, already down by one member, arrive at the town of Hopscotch which is constructed from board games and huge puzzle pieces. The arrogant mayor of the town has all citizens participating in games with strict rules and deadly consequences – games that Percy (the piggy bank) will have to win if he and his friends are to survive. 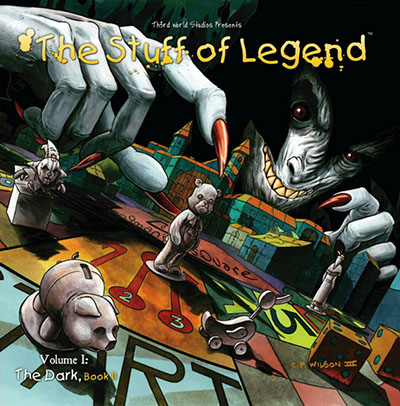 The dynamic, fast paced story supplied by Raicht and Smith is perfectly complimented by the rich and detail-heavy pencils of Wilson. Special mention must be made to colorists Jon Conkling & Michael DeVito. The brown and yellowed-aged look to the comic (along with its horizontal storybook format) pushes the already overflowing magical quality of the work to a whole other level. As a reader, it makes one feel as if they have found some lost literary treasure rescued from a dusty, molding chest pushed long ago to a forgotten corner of a neglected attic.

This is one of those wonderful comic discoveries, a book that came in under the radar (much like fantasy masterpiece Bone) only to catch everyone by surprise and send shop owners scrambling to get issues on the shelves. My favorite comic store said that they sold out the first issue, then promptly sold out the second printing, and still have people calling looking for it.

The extremely broad appeal of something like this makes me think that (although I would never, ever use this as a barometer to judge the quality of a comic by) Hollywood will fall all over itself to acquire movie rights for this very singular creation. Published by Th3rd World Studios,The Stuff Of Legend is highly recommended for fantasy fans, comic art aficionados, or anyone who is interested in a good story, expertly told.