Many of the best creative endeavors are bound to be short lived. An artist will usually know when he’s said all he has to say before running the risk of going stale or to simply move on to the next phase of his artistic career. This certainly happens in the world of comics and seems to now apply to the brilliant strip The Perry Bible Fellowship by Nicholas Gurewitch.

Describing The PerryBible Fellowship (which premiered in 2001 and is named after an actual church in Maine) to someone who has not seen it is near impossible because the strip is stylistically in a near constant state of flux. Though the strip adheres mostly to the familiar three to four panel format, the only connection from entry to entry is Gurewitch’s impeccable comedic timing and perfect punch line delivery. Very, very rarely does one see a character make a repeat appearance and the artistic style can fluctuate from intensely detailed line-art to warm painterly hues to simple human characterizations.

Innocent childhood iconography placed and used in service of crude humor is funny on the surface, but usually completely hollow through and through. It really could be the very definition of a one-note joke, the kind we’ve seen beaten endlessly into the ground on television shows like FamilyGuy and Robot Chicken. Perry differs in that while many of the punch lines can be extremely dark and potentially offensive, they are simply too clever, original and, most of all, absurd to fall into the same comedic class as those programs. Also, when Gurewitch uses a recognizable pop-culture character it seems it is for the sake of straight parody and/or tribute to its creator.In addition to Gurewitch’s own highly individual artistic style, it is amazing how he can perfectly mimic the work of others when the occasion calls for it.

Not surprisingly, it did not take long for the critics to take notice of Gurewitch’s efforts. The strip has won numerous honors including Harvey, Eisner and Ignatz awards. The first collection of the strip, Perry Bible Fellowship: The Trial of Colonel Sweeto and Other Stories from Dark Horse Comics, basically sold out before publication, causing the publisher to up its own print run to accommodate pre-orders. 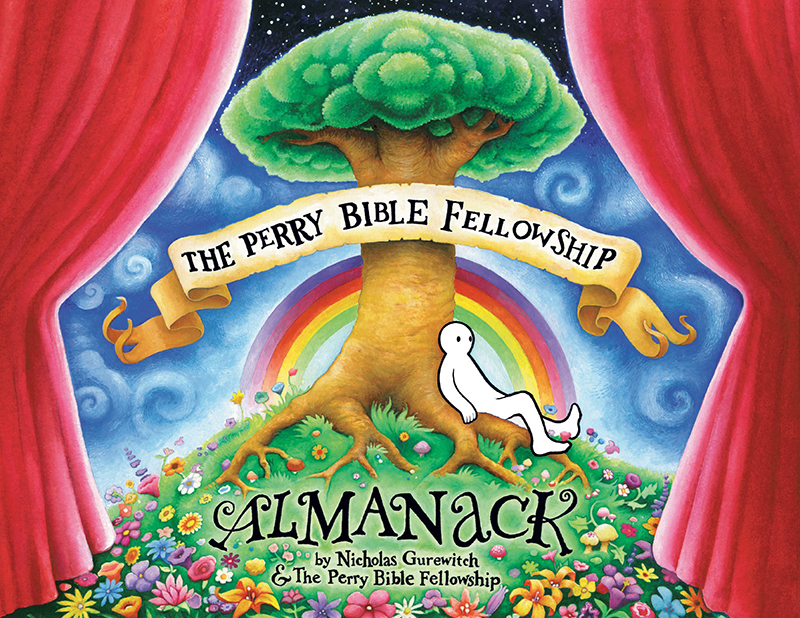 Unfortunately for the many admirers of the strip, its frequency began to diminish in early 2008 and July of that same year saw the publication of the final (for now?) installment of The Perry Bible Fellowship.In a recent interview Gurewitch stated, “I think a lot my ideas have grown so weird that I think I may need another medium for it.” He is currently at work on numerous film and TV projects.

Though the future potential for more installments of Perry seems unlikely at best, one can get their fill of PBF goodness with the lavish, recently published The Perry Bible Fellowship Almanack by Dark Horse Comics.

This beautifully produced hardcover features the entirety of the Perry strips and also features such extras as unused material, an interview, and an introduction by Juno screenwriter Diablo Cody. A perfect book to leave on your coffee table to gauge the good tastes (or is that the limits of good taste?) of your visitors who may peruse it. In any case, if it is to be the final testament of The PerryBible Fellowship it is a fitting one for this, the best comic strip of the last ten years.