When one thinks of important American epicenters for the development and cultivation of comic art, there are a couple that will always spring to mind first. New York is one, of course, as New York City is the undisputed publishing capitol of the country and home to industry giants Marvel and DC. California is certainly another as San Francisco was ground zero for the counterculture movement of the 1960’s and the explosive, unapologetic underground comics that emerged from those politically charged and artistically liberating times. One place that may not come to mind immediately is the state where I am proud to say I come from -Wisconsin. To most, Wisconsin may seem like an unlikely hub for sequential art, but its robust history in and profound influence on the medium are discussed in Paul Buhle’s new book titled, ComicsIn Wisconsin, published by Borderland Books.

Comics In Wisconsin, told in an academic yet highly readable and entertaining fashion by Buhle, sets the stage for the state’s rich comics history by first delving into the progressive (and at one point in time, socialist) politics that have existed in Wisconsin, and in particular the major cities Madison and Milwaukee, for almost as long as the state itself. During the early years of the 20th century, political cartoons were immensely popular amongst newspaper readers and Wisconsin-born cartoonists found work both at home and at papers in nearby Chicago. These cartoons, which regularly took aim at the excesses of industry magnates and fat-cat politicians, were humor strips. The early success of The Gumps led the way for what is now considered by many comic industry scholars and pros as one of the greatest comic strips of all time: Gasoline Alley by Tomah, WI native Frank O. King. 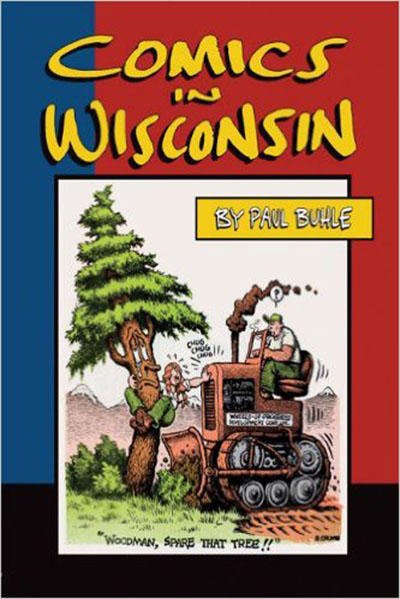 In Gasoline Alley (premiering in 1918) confirmed bachelor and automobile mechanic Walt Wallet one day finds an abandoned baby boy on his doorstep. Named Skeezix, the boy becomes the center of Walt’s life. Alley was ground breaking in that it’s characters aged as the years went by. The strip is also notable for its beautiful Sunday pages in which the larger format allowed for greater artistic experimentation and for King’s characters to ruminate on nature and life (highly informed from King’s small town Wisconsin roots), whereas the daily strips were more concerned with whatever the ongoing storyline happened to be.

Through fostering generations of free thinkers and progressive political movements combined with being the home of Wisconsin’s foremost university (UW-M), Madison became a true counter-culture hub in the 1960’s. Dubbed “The Athens of the Mid-West” the city became a mandatory stop for radicals and free spirits making the pilgrimage from the East Coast to the West. The underground comics (or comix) movement in Madison during the late 1960’s started on the college campus in incendiary newspapers and in Radical America Komicks published by Paul Buhle for the interests of the New Left organization SDS (Students for a Democratic Society.)

Just around this time a young man named Denis Kitchen (from Racine, WI and, more specifically I’m proud to say, the same neighborhood I grew up in) started his own independent weekly newspaper called The Madison Bugle-American, which featured comics including Kitchen’s own. Denis Kitchen is, I feel, the most significant name in all of Wisconsin’s rich comic history because in 1969 he started Kitchen Sink Press, a publishing house (headquartered in Princeton, WI) that for the next thirty years would put out the very best in sequential art and storytelling of the fading past and contemporary present.

A true comics historian, Kitchen is instrumental in preserving and releasing issues and collected archives of timeless, classic titles including Will Eisner’s The Spirit, Al Capp’s Li’l Abner, George Herriman’s Krazy Kat and Milton Caniff’s Steve Canyon as well as numerous works by Harvey Kurtzman and even Ernie Bushmiller’s simple, but irresistible Nancy.

But of course Kitchen Sink Press has always been one if the premiere publishers of underground and independent comics since its very inception. Even a brief list of those KSP has published reads like thirty years (two generations worth) of alternative comics royalty. Brilliant creators like Robert Crumb, Bill Griffith, S. Clay Wilson, Charles Burns, Art Spiegelman, Will Elder, Mark Schultz, William Stout, Dan Clowes, Richard Sala, Chris Ware, Alan Moore, Eddie Campbell, Jack Jackson and Tim Truman make up only a fragment of the output from the company’s three decades of publishing. Proof positive that a wholly independent comic art publisher can exist outside New York and California, continually give readers the very best material the field has to offer, and still retain its uniquely Wisconsin-born identity. A very generous portion of Comics In Wisconsin is reserved for KSP and deservedly so.

Unfortunately, Kitchen Sink fell upon hard times in the late 90’s, due in part to the distribution problems prevalent in the industry at that time, and in 1999 closed its doors. Today independent comic publishing is alive and well in Wisconsin as a new generation of creators are stepping up to place their particular mid-western flavored stamp on the comic scene of the 21st century. Comics In Wisconsin is a heavily illustrated, highly engaging and authoritative examination of a sometimes overlooked, but incredibly important corner of sequential art history.