Nobody likes being the last person to show up at a party, and boy do I feel like I’m the last person to show up at this one. I consider myself an avid fan of all things horror since childhood, but I have to admit that until now I have not read the incredible Image comic The WalkingDead. But like a straggler at a blowout drinking fast to be on everyone else’s fuzzy wavelength, I am attempting to make up for lost time. In the last week or so I have read all ten of the currently available trade paperback collections of The Walking Dead, equaling the first sixty issues of the series, and am feeling completely overwhelmed and astounded to say the least. 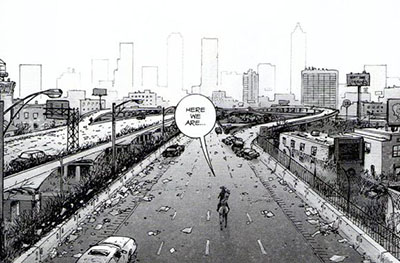 Written by Robert Kirkman and illustrated by Tony Moore (issues 1-7) and Charles Adlard(issues 8 and up) The Walking Dead takes the overly familiar premise of the end of the world via zombie apocalypse into the realm of a dark and sprawling humanistic epic. It is clear from the start that Kirkman has seen, studied, and, perhaps most of all, loves George Romero’s zombie films. Yet instead of creating a pale imitation of those cult classics as so many have, he recognizes the storytelling strengths that the Romero films share, the ones that make them so unbeatable, and incorporates them into something wholly his own.

Our key character is police officer Rick Grimes who awakens from a coma unaware of the severe shift in the world that has taken place. He learns quickly enough though after being confronted by a horde of the undead in the hospital’s gore strewn cafeteria.

Horrified, he escapes the hospital and rushes home to find it (and his neighborhood) abandoned, his wife Lori and young son Carl nowhere in sight. Fearing the worst he makes his way to the nearest big city, Atlanta, in the hopes of finding them as well as other survivors. Upon reaching the outskirts of the city he meets a small camp of survivors, his wife and son amongst them. With the introduction of these cast members the pieces are set in place for what becomes a massive epic of survival horror. As these characters begin their search for a safe place to call “home” many will die, new faces will be introduced, and they will come to know that there is far worse evil in the world than the shambling, mindless dead that endlessly pursue them.

Displaying the disintegration of human behavior through rapid societal breakdown can be approached by a writer in any number of ways. To show this in a way as fantastical as the dead coming to life with an unending craving for human meat gives Kirkman (and the sensational artists) a chance to push the doomsday scenario to bleak and grisly psychological extremes. In the pages of The Walking Dead all of the characters, good and evil, are deeply affected mentally by the incomprehensible place their world has become. Though this sets the stage for both acts of bold heroism and vicious sadism, bloodshed will almost always be a means to an end regardless of the motivation. 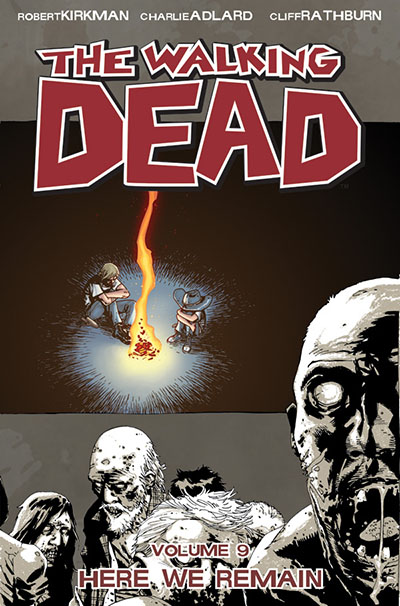 Not too surprisingly for a post-apocalyptic horror story, a reoccurring theme in The Walking Dead is that the true monsters are in fact other humans. There are other survivors in this wasteland even more dangerous to our main characters than the zombies themselves.

Rick and the others of his group were basically decent and upstanding citizens before the fall of society and they still attempt to hold onto their morals in a world were such things no longer apply. To protect their loved ones as well as themselves, brutal acts must be committed, things completely unthinkable before the turn. The mental and physical transformation Rick is forced to endure in the pages of The Walking Dead is equal parts startling and horrifying. It is all too appropriate that Vol. 9 of the series is titled What We Become.

Despite the bleak nature of the above, there is hope to be found in this story. Despite all the hardships our core characters suffer, they still hold desperately onto their humanity and the hope that they may yet find some measure of peace in a god-forsaken world.

These characters are so completely realized, their reactions to what’s happening so believably portrayed both in words and images, that we are completely with them on their journey. When a character dies it is alarming and even upsetting. Kirkman understands that since the horror genre has been pushed so far in terms of violence little registers anymore as truly shocking, and that the only way to really jolt an audience is to give them characters to actually care about and put them in incredibly dangerous situations. This way we feel as if we’ve lost someone we have an affinity for  and understanding of when they perish and the impact increases tenfold. This, I feel, is the real power behind this incredible series.

The best praise I can give to The Walking Dead is in linking the experience of reading it to watching Romero’s Dawn of the Dead. It shares the same levels of high tension, great characters, social commentary and mind blowing gore of that all-time classic film with one big difference: after two hours Dawn of the Dead ends. The Walking Dead, currently nearing seventy issues and 1,500 comic pages, shows no signs of slowing even a little. As I mentioned at the top of this article, I am late in arriving to this particular party. Luckily, I am now in it for the long haul and feel the creators can continue spinning this breathless tale for as long as they feel they have new story arcs to explore. While I do hope Rick and his fellow survivors find the peace they so desperately long for this is one comic so damn good that I wish it will never end.

NOTE: I’d like to give a special shout out to my cousin Jesse for generously loaning me his library of The Walking Dead collections. Much thanks! I’ll return the favor and get you going on The Drifting Classroom.