Now that 2010 is in full swing I’d like to wish all of our Comic Impact readers all the best in the new year and charge right back into my Best of 2009 list. Up, up and away we go….

It comes as no surprise that Ed Brubaker can write a great crime comic. What does come as a surprise is that any wirier, even one as talented as Brubaker, can take the crime/noir genre and make it feel so fresh and invigorating that it’s almost as if you’ve never read the likes of them before and this is exactly what he does with the series Criminal.

Indeed, the reader becomes so engrossed in the violent, doomed world the characters move through that you’re not even aware until after you’ve closed the cover that the stories deal with familiar noir archetypes such as the failed boxer, an initially well meaning but ultimately doomed female and a small time hood pulled into one more irresistible big time score. It’s hard to imagine now, but there was once a pre-Pulp Fiction & Sin City time when such tales of crime and punishment were mostly familiar just to fans of old, yellowing paperbacks and 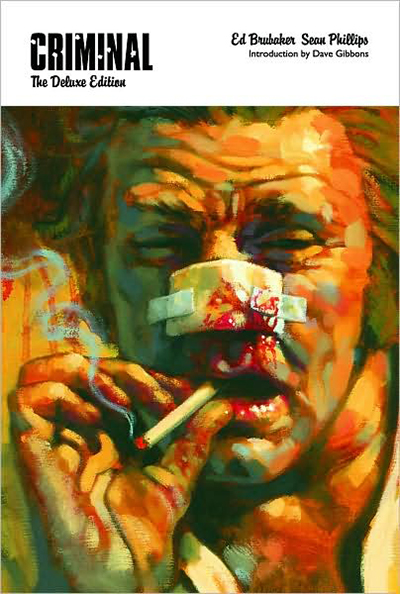 classic cinema buffs who could quote a line from Double Indemnity at the drop of a hat. Yet still, even with this time-worn genre Brubaker is able to reshape its basic constructs into something utterly startling and completely lean and mean, the comic book equivalent of an open palm slap to the face. Ably assisting Brubaker is artist Sean Phillips whose art is absolutely pitch-black perfect for conveying the relentlessly seedy environments of the stories found in Criminal. Everything within the panels feels just right, from the incredibly expressive faces of the main characters on down to the tiniest of details like the trash collecting in streets and gutters, human and otherwise.

For those (like me) who made the mistake of not getting the individual issues as they were being released, this deluxe hardcover is truly the way to go. The superbly printed, larger than standard comic sized pages really makes the art shine, not to mention the wonderful colors supplied to the series by Val Staples. The back of the book also supplies a number of bonuses like a cover gallery, essays, and a comic “trailer” created for the internet to drum up interest for the series before its printed premiere. This book is the perfect presentation for Criminal which joins Jordi Bernet’s Torpedo as some of the very best crime comics of the last fifty years.

There are very few comic creators who will site the great American Illustrators of the past as primary influences. There are even less that can site those names and then display a level of artistry in their work that shows them talented enough to carry the classic illustrative artistic torch laid down so long ago. Two current creators that come to mind first are Mark Schultz and Gary Gianni, but now there is another to add to that list: Jeremy Bastian via his astounding debut comic book Cursed Pirate Girl.

Though he has only released two comic books thus far (those being Cursed Pirate Girl 1 & 2 of a 3 issue mini-series) I strongly feel that Bastian is the best young artist in the field. The beyond-belief level of detail and draftsmanship in these books display a creator with a seemingly endless well of talent and imagination, not to mention patience. Even more astounding is that he inks with a brush and draws at the same diminutive size as a comic itself as opposed to the standard 11′ X 17′ sized board most artists in the field utilize.

Of course, this all wouldn’t work without a great story and Cursed Pirate Girl certainly has that. Set in the 19th century our Pirate Girl in question is a fearless pre-teen orphaned lass who lives on the beach under a ruined wharf. Dreaming of a long-lost father she believes to be a great Pirate captain who sails the dangerous and foreboding Omerta Seas, she sets out on a quest to find him with the talking parrot Pepper Dice in tow. The sense of high adventure and pure fun that emanates from every page of Cursed Pirate Girl is a breath of fresh sea air in today’s often gloom ridden action releases. Equal parts Lewis Carrol and Windsor McKay, Cursed Pirate Girl is my pick for the best comic book of 2009.

Talking animal comics usually consist of saccharin amounts of cuteness, simple story-lines and are aimed at younger readers. This is certainly not the case with the tightly written and beautifully painted Beasts of Burden four issue mini-series by Evan Dorkin and Jill Thompson which has recently come to close.

Taking place in a idyllic countryside area titled Burden Hill, our cast of adventurous dogs (and cats) accept the duty of investigating the various supernatural occurrences that are transpiring more and more frequently in their deceptively serene area.

Though the animals themselves are presented every bit as cute and endearing as their real-world counterparts this is no guarantee that all of these wonderful (and often humorous) characters will make it through whatever situation they are currently attempting to solve. Very real danger permeates all of the Beasts of Burden stories giving them a tense edge that will undoubtedly be startling to some readers.
Particularly effective is issue 2 in that although supernatural forces are at work, the true monster here is a human teenager with a history of abusing and killing animals. This particular issue is easily one of the most utterly heart-breaking comic books I have ever read with a final page that is very hard to shake off.

It may be half a year until the Eisner and Harvey Awards are announced at Comic-Con, but I’m going to predict now that Beasts of Burden, and issue #2 in particular, will walk away with at the very least one trophy from these institutions that represent the ultimate in industry accolades. 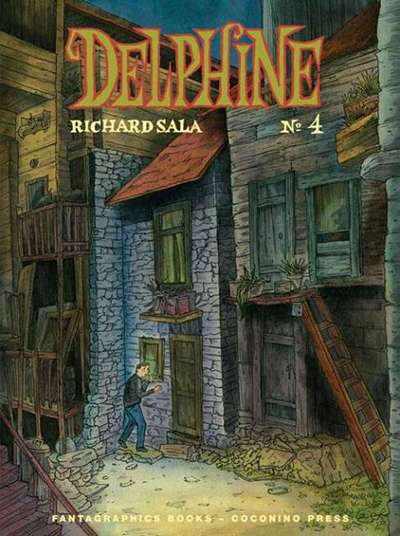 In it a young college student travels to the isolated, decrepit hometown of his hastily departed love Delphine. Once there he is confronted at every turn by an increasingly bizarre and threatening variety of locals. As the situation worsens and his downward spiral deepens he is rushed headlong into scenarios which are more and more out of his control. Sala’s supremely ghoulish artwork, enhanced by the high-quality, cream colored paper on which it’s printed, has never looked better or more hypnotic. For an artist whose visual style and sense of storytelling were nearly completely realized from the very start of his career over twenty years ago, this is a new high in his already considerable stable of ghastly foes and hideously fiendish happenings. With a tone as inescapable as a thick layer of fog and an impeccable sense of pacing this is mandatory reading for horror fans and mystery mavens alike.

Thankfully in recent years we have seen the attention of the art-world turning (a least a little) away from purely conceptual works towards a return to the world of representational art. And while we still have quite a ways to go before Frank Frazetta gets a mention in college art history textbooks, there is enough interest in the great American illustrators of the last 100 years to give us what is perhaps the most lavishly produced art magazine this country has ever seen: Illustration.

Started in 2001, Illustration now numbers 28 issues and has no sign of slowing. Giving thoughtful insights and overviews of the lives and work of great artists like Norman Saunders, Bob Peak, Reynold Brown, Bernie Fuchs, Frazetta  and many, many others, Illustration puts a deserving spotlight on an area of American art that is long overdue. Movie posters, paperback covers, advertising, magazine pieces, comics, caricature, pin-ups and even painted images for model kit boxes, everything can be found in the pages of this peerless publication.

But the subjects themselves is only part of the story of why this mag is so great. It is also the production quality of the images itself that truly seals the deal. The perfectionist approach to the image reproductions (shot from original art whenever possible) and the paper they are printed on have to be seen to be believed. This magazine has the lavish attention paid to it that is normally reserved for high-priced, coffee table art books. If anyone wishes to check this magazine out and balks at the $15.00 price on it, don’t: even a quick flip through it will prove it to be worth every penny. 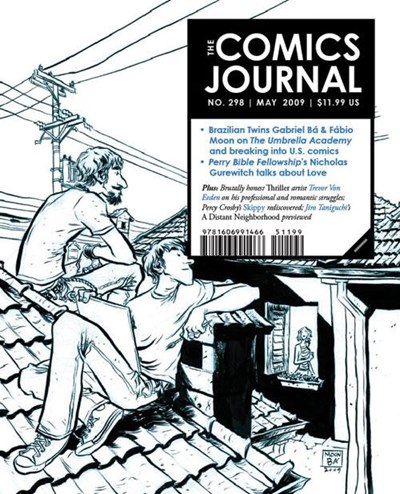 The inclusion of the The Comics Journal in this overview of the year’s best is really pretty much a given. If you are serious about the state of the industry, and the importance and relevance of those working and creating within it, this is the only comics related publication you need to be reading.

Opinion of it can vary wildly (which always astounded me due to the magazine’s quality) with some citing it as thoroughly elitist. This accusation is very inflated and undoubtedly comes from those who feel that mainstream offerings are being slighted in favor of the alternative press. If one actually goes back and looks at the content being offered on a regular basis you’d see that this is not true. Journal takes the sequential art medium very seriously and will give the most thought and exposure to the releases that warrant and deserve it, regardless of the genre or publisher. Famous for their massive, career-spanning interviews, one is just as likely to see that amount of space reserved for a top mainstream creator like Darwyn Cooke as opposed to a independent or underground artist. Additionally, they just published it’s landmark 300th issue and no critical art magazine is going to last that long on pomp alone.

But all that aside, personally my biggest reason for its inclusion now is that my favorite comic essay of the year (by far) appeared in their 299th issue concerning the greatest comics anthology of all time that has never been published or seen the light of day. Titled Someday Funnies the volume, which would have seen print in the 1970’s, was to feature a stable of almost 200 top comic (and even non-comic) creators from the world over compiled into one massive masterpiece of a book. Just a small sampling of contributors was to include Bill Griffith, Art Spiegelman, Jack Kirby, Slavador Dali, Trina Robbins, Frank Zappa, Moebius, Will Eisner, Gahan Wilson, William Burroughs, C.C. Beck, Barry Windsor-Smith, Tom Wolfe, Federico Fellini and Archie Goodwin. Written by Bob Levin, the tale of how close this unprecedented project came to being a reality only to fall apart for a myriad of reasons makes for incredibly fascinating reading and I could not recommend this issue more to everyone and anyone who loves comics.

One more small general note about The Comics Journal: the black logo/UPC code box on the slick covers is actually a sticker that is easily peeled off to give you a text free image of the cover art. And that’s just plain cool.

So there you have it, my picks for the greatest releases of a year that was surprisingly strong for us fans of the funnies. On a little more serious note, 2009 was not a very good year for most of us, be it for financial reasons or otherwise. However, I strongly feel that 2010 will be better for us all and I  wish nothing but the best for everyone who takes time out of their day to check in on Comic Impact. Thanks for reading!