There is something enticing about tales of addiction, shame, and degradation that easily draws the reader into the skeleton-filled closets of the author. What exactly that attraction stems from is something I’ve been considering a lot since reading the sensational graphic novel The Alcoholic

by Jonathan Ames and Dean Haspiel, now available in trade paperback from Vertigo.

Is the attraction to this material due to having the chance to peek into the life of one who suffers from a problem that seems utterly foreign to those unafflicted? Or for one with similar problems to feel an affinity with another human being and know that they are not alone? Or maybe those who skirt the line between recreational use and addiction can look to the sordid activities of another and say “At least I don’t do that”. Whatever the answer may be it is very true that the best writers who deal with tales of addiction never lose sight of the humanity that becomes clouded, but never erased, in the user. This makes their stories universal, regardless of the reader’s background, and there is much humanity (and humor) in the pages of The Alcoholic. 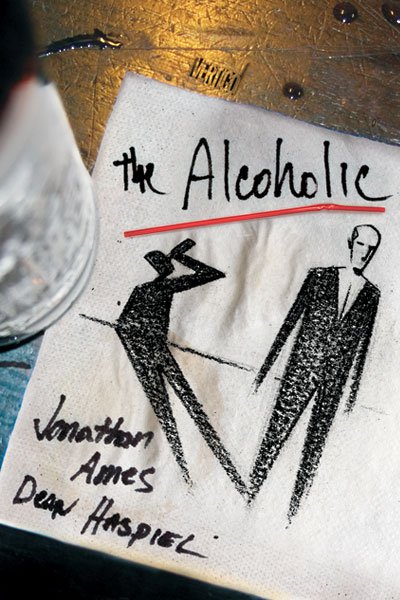 The Alcoholic follows the character “Jonathan A.” who just happens to bear an uncanny resemblance to, and shares a similar professional history with, writer Jonathan Ames. The story opens in August 2001 as a middle-aged Jonathan comes to out of a drunken stupor in a car with a much older (and very tiny) woman. As his brain reels to figure out how he got there we flashback to the 70’s as a teenaged Jonathan first discovers the wonders of drinking and revels in the freeing emotional sensations it brings.

The story continues to unfold in a series of expertly constructed and placed jumps from the past to the narrative present as Jonathan takes us through the various highs and lows of his life. The reader comes away with a complete picture of how the presence (and absence) of drinking and drugs has shaped these events and formed Jonathan into the person he is now.  People and events, both connected and disparate, unfold as the story progresses. The death of his parents, close relationship with his great-aunt, the events of 9/11, his estranged childhood best friend, numerous relationships with women, and an almost constant compulsion to drink overlap each other as the reader advances.

This type of subject matter in literature can often portray a life at its bleakest and most hopeless points (such as in the novel Leaving Las Vegas by John O’ Brien). Yet the tone in The Alcoholic is at times comical, pointing to the small absurdities in life that happen at the least expected times. One such memorable scene happens when our author and a table full of others are having dinner with a post-Clinton scandal Monica Lewinski. As the food arrives, an oblivious Lewinski comments on how delicious a large sausage looks, sending the entire table into uncomfortable silence. Jonathan sees no other choice than to astrally project himself out of his body to deal withthe bizarre moment.

All moments in The Alcoholic, the unflinching and the comical, are wonderfully depicted by the art of Dean Haspiel. His often densely inked b&w art give the panels just the right hint of noirish flavor, while his highly expressive renditions of the characters are at times slightly exaggerated to provide the emotional knock-down that is set-up by Ames and his highly insightful writing on the human (i.e. his) condition. This works the best, of course, on Jonathan, as his already angularly depicted facial features are wide open to mild distortion as he sinks into the mire of booze, coke, and eventually, heroin.

The book ends on the familiar mantra that is repeated ad infinitum by many people lost in the downward spiral of addiction. It can easily be adjusted to whatever situation the certain individual happens to be in. For Jonathan it sounds like this: “I will never drink again”. We want to believe that Jonathan, who at one time had thirteen years of sobriety under his belt, will do just that. Unfortunately, life’s biggest problems are far too complicated to be solved by a simple statement promised to oneself during an emotionally charged moment.  Action is doing, but when one is walking the straight and narrow in life it is far easier to fall through the cracks in the sidewalk than it is to avoid them.