Shitty jobs: almost all of us have had to put up with them at one point in our lives. Much more often than not working for an awful boss and/or company becomes a test of one’s endurance, where you ask yourself on a daily basis, “How much of a beating can my pride withstand before I just can’t take it anymore?” If this is the kind of situation you find yourself presently in, it may be of some comfort to know that you are not alone in your frustration and you’ll certainly realize this in reading Carol Tyler’s excellent and highly insightful book The Job Thing from Fantagraphics.

Published in 1993, The Job Thing originally appeared in the pages of Street Scene magazine. In it Tyler relates a series of autobiographical tales of on-the-clock misery that are completely relateable and often extremely funny. As the book opens, it is the early 1980’s and Tyler is graduating with a master’s degree in fine arts and heading to New York, assured success is just around the corner. 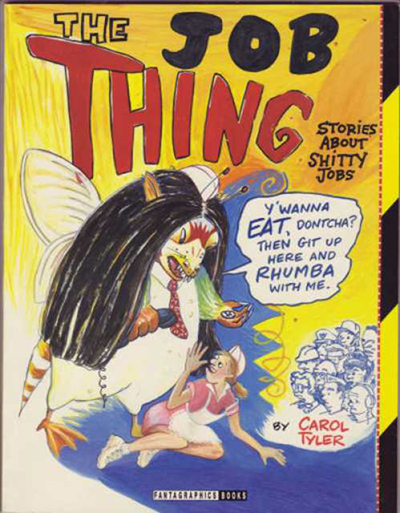 Unfortunately, Tyler will soon discover that doing well in school means less than nothing in the real world, and her rude awakening comes when she is forced to take a menial job at a picture framing store. Tyler’s pride is not the only thing injured, however, as she is eventually stabbed in the foot with an ice pick by a woman-hating co-worker.  We’d like to think that this is as bad as it will get for Tyler, but unfortunately this is only the beginning of a string of frustrating, unrewarding, soul crushing, dead-end jobs that she will be forced to endure for the next 10 years as her dreams of being a “known” artist slip further and further away. At differing times she pays her dues as a waitress, bookstore clerk, drywaller, census taker, floral delivery person, and a tofu presser for a guru who drinks his own urine (not shown, thankfully).

A high point in the book occurs in a story set in New York in 1982. Here a broke and unable to pay rent Tyler sees no help coming from her selfish live-in boyfriend and goes out into the pouring rain in search of something, anything to help her situation. As things go from bad to worse she finds herself on the subway next to a rich woman and darkly contemplates how easy it would be to steal her necklace. The scene says much about how even the most honest among us can still be easily tempted into doing the wrong thing when all other alternatives seem exhausted.

As things usually go however, before the pity party that we all put ourselves in from one time or another grows too big, we see something that makes us remember that there are those in the world that have seen much worse. A wonderful example of this occurs at the end of Tyler’s New York tale in which she is given the chance to work in a Jewish deli. As she internally bemoans her fate she notices that the kindly, older women there have numbers tattooed on their arms, a permanent sign of the time spent enduring the atrocities of the Nazi concentration camps. It’s one of those small moments in life that reminds us that we have much more to be thankful for than we think.

A brief interlude on the Hollywood comedy scene offers a glimpse at a life free of financial worry, but Tyler’s starry-eyed optimism soon fades after she returns home, hears nothing from her backers, and is left with nothing but the bills for her time in L.A.  Still, with the inclusion of a husband and daughter into her life, Tyler realizes that now she labors not just for herself, but also for the ones she loves, making her efforts more meaningful albeit no less stressful.

Wonderfully rendered in a style that veers from loose and playful to dense and detail heavy, Tyler’s art perfectly complements her personal stories of frustration and reward.  Though her experiences may not mirror our own exactly, there is something everyone can relate to in this collection of wage-slave tales. For those unfamiliar with Tyler’s work, you will not only have a fantastic introduction to it in the pages of The Job Thing, but you will also be treating yourself to what stand as some of the best auto-biographical comics you’re ever likely to read.