The original, Generation X defining Hate series ended in 1998 with issue 30. Still, the adventures of Lisa and her hubby Buddy (a formerly grunged-out Seattle slacker turned responsible father to their son Harold) continue in the pages of the Hate Annuals, including the recently released 8th issue.

Lisa has had her share of ups and downs through the years, including bouts with mental illness, but this is one Generation Xer who never fails to bounce back no matter how many times life pushes her down. With the dissolution of the Seattle scene in the mid-1990’s, Lisa and Buddy move to his home state of New Jersey to find something that at least resembles marital bliss and financial stability. Keeping in tune with the natural order of such things, the arrival of little Harold comes not far behind. 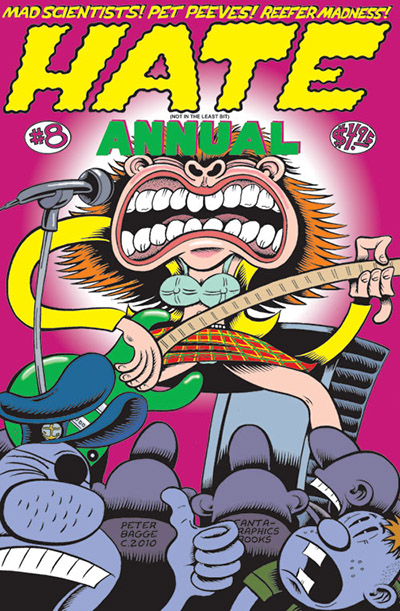 Today finds a nearing middle-aged Lisa suffering from the maladies that hits many stay at home moms: boredom and creative unfulfillment. Not content to be a member of the arts and crafts set she attends a PTA meeting at Harold’s grade school. Unfortunatly the formerly wild Lisa is not interested in paling around with the uppity soccer mom types she finds there. Still, attending the meeting leads her to meeting tattooed, hipster mom Stacy. Though Buddy is less than enthused at the thought of hanging out with Stacy’s cluelessly off-putting husband Brandon, Lisa feels she has found a new best friend.

I find the characters of Stacy and Brandon particularly dead-on as the unwillingly domesticated, pushing 40 Gen Xers who can’t let go of their fading youth. These types are practically everywhere here in Los Angeles where I live, especially if there is a hipster children’s clothing boutique in the general vicinity. I find it hilarious that the same people who once were appalled at the corporate branding of kids via stores like Gap Baby are now tailoring their own children into mini fashion statements, complete with ironic t-shirts and faux hawks. Fortunately Buddy, who is cut from more of a traditional fatherly cloth, can spot these types from a mile away.

Lisa and Stacy quickly become best friends and find an outlet for their domestic boredom by starting a two woman rock band. Their idea is to sing their own lyrics over Tori Amos songs, sort of like Weird Al Yankovich, but with a straight face. In (suspiciously) little time “The Milf’s” have their first gig lined up at a club in a seedy part of town. Turns out it’s a strip club where the hired help seems to be very familiar with Stacy. Things spiral out of control quickly as the drunken crowd is not too interested in the girl’s musical offerings.

Stacy is quick to give the crowd what they want and we see that she is an ex-stripper eager to reclaim a bit of her misspent, flesh-baring youth. When Brandon appears on the scene to get the unwilling Stacy out, the drunken crowd gets ugly quick and Lisa makes a hasty exit.

Though Lisa’s musical endeavor was short lived, we can believe that like all resilient modern day moms she will carry on and find another, more successful way to find personal fulfillment while still being the best wife and mother she can be.

The adventures of Lisa, Buddy, and the rest of the eminently hilarious Hate cast through the years can be found in several trade collections from the fine folks at Fantagraphics. They would make a great gift for the cool mom in your life, but keep in mind that if the recipient is as swingin’ as she thinks she is, then she was hip to Hate years ago!