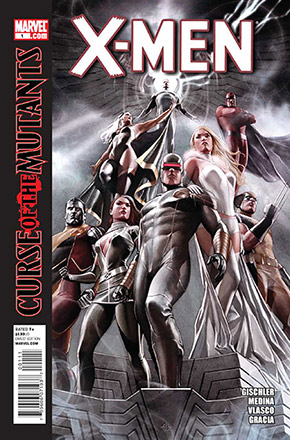 For sometime now, we have been hearing  about this all new X-Men comic, that is going to have vampires in the first story arc. I personally think it is a bit silly.Well, guess what I read last night? That’s right, the new X-men number 1 from Victor Gischler (‘The Death of Dracula’) and artwork by Paco Medina (‘Deadpool’). How was it? How did I get a copy, and does it spoil ‘Second Coming’? Read on to find out.

First off this issue does not spoil ‘Second Coming‘. Thank God, I would be so fucking mad if it did. So you can read this when it hits comic book stores on  Thursday July 7th 2010. How did get a copy? Well, sometimes it helps working at a comic book shop. Now was it any good? I am sure you’re dieing to know.

I love Paco Medina’s artwork, and I have been loving his work on Deadpool. When Deadpool joined The X-Men a while back, I told myself I would love to see Medina working on an X-book. I was in love with his Wolverine in this issue, I mean who does not love Logan with a cowboy hat, I mean come on!

What about the story line? It is ok for a first issue, but it is not the best first issue in the history of comics. But it is not that bad. Now, without any further ado, here is the run down of  what goes on in X-Men #1.

The comic opens up with Jubilee and Pixie talking outside a cafe in San Francisco enjoying life after ‘Second Coming‘ until they see someone who looks a lot like a gimp open up his mask, and then we see a big explosion.That much we saw in the preview pages that hit the net sometime back.

Then we see Cyclops and Wolverine talking on Utopia. They are thinking it might be terrorists attacking. Is Bush still President in the Marvel Uuniverse? Because I have not heard the name Al-Qaeda since 2002 in any comic…

Pixie comes in and tells both Cyclops and Wolverine to come with her. We see Doctor Nemesis and Kavita checking up on Jubilee since she was full of blood after the explosion in this point of the book. I think Gischler did something very funny as both Cyclops and Wolverine want to say the ‘V’ word but then don’t. At the same time they also find out that it was not a normal explosion, but a vampire  killing himself in broad daylight.

We also see a vampire attacking people in Fisherman’s Wharf in San Francisco. There is a scene with a woman who joins the vampires. I am sure they will touch on this subject in the next issue.

Now to the fun part of the book which made me very happy as a long time fan of X-Men. Cyclops gets a team of Wolverine, Pixie and Angel to go downtown where the vampire  killed himself. But guess who attacks our mutant friends? A group of blood sucking vampires. We see the X-Men kick some ass here, but I cannot help but think about Uncanny X-Men #133, where Wolverine is fighting part of the Hellfire Club in the underground of New York City.

At that point in the comic, Cyclops finds out something that will impact the rest of the X-Men and also we see Jubilee getting very pissed off. Is this before she turns into a vampire? The book ends with Cyclops calling back Wolverine, Pixie and Angel to Utopia. Overall not a bad first issue it was very short and made me want to read the rest of this story line.