To see the name of Italian sequential art master Milo Manara attached to a graphic novel is an absolute guarantee that within the pages of said book you will find one thing: beautiful women. Of course, these women are more than beautiful. They are also strong, confident, and very often fully aware of their own sexuality and the heights of ecstasy it can take them to. 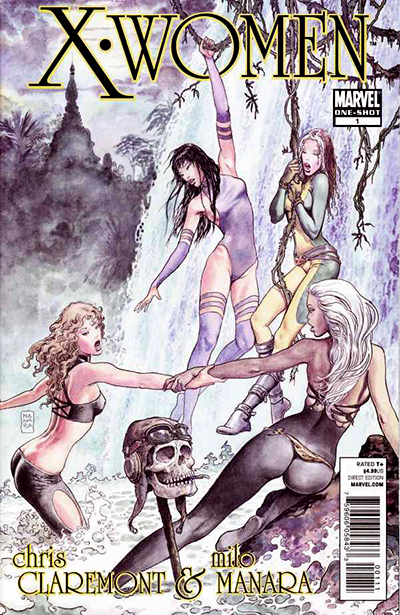 Though breathtakingly gorgeous (and perfectly drawn) women and sex are very prominent components in Manara’s work, it is important to note that his work does not carry an air of misogynism to it. Rather, the physical encounters on display are far too playful to ever be seen as chauvinistic or be accused of simple male wish fulfillment fantasies.

Given all of the above, knowing what the name Manara stands for, I could not have been more surprised (flat-out blown away, really) to see his name on the newly released Marvel one-shot title X-Women.

In the story what should be a relaxing trip to Greece for the heroes, instead turns into a rescue mission to save Emma and Rachel, whose combined powers are being used to aid an illegal arms dealer. Added to the mix is a tropical island group of “Cargo Cultists” who worship machines of the air (and have a leader who wants to “worship” Storm in his own way.) Even though the female form is the focus here, we can’t forget that everything Manara draws is beautiful, be it natural landscapes, heavy machinery, or explosive action.

To have the internationally renowned Manara give his signature take on such famous Marvel women is a huge visual treat for a comics buff, regardless if you’re a fan of the various X-men titles or not. Beautifully executed and a lot of fun to read, this is the most unique title you’ll see from Marvel all year. It is worth noting as well that X-Women was released in Italy in April 2009. Is this version racier than the one us American readers are only now seeing? It would be worth checking on, as the following final page of the comic says plenty about what Claremont and Manara think really happens when these girls cut loose…