Cosplay Girl of the Month: October 2010

Simon Daoudi · October 05, 2010 · Cosplay Girl of The Month · 0 comments
0
One of the features we do here at Comic Impact is the cosplay girl (NO anime, manga, role-playing games just comics) of the month, that’s  right hot girls dressing up like your favorite super- hero characters. This month we’re privileged to have Kit Quinn  aka  as our Cosplay Girl of the Month! 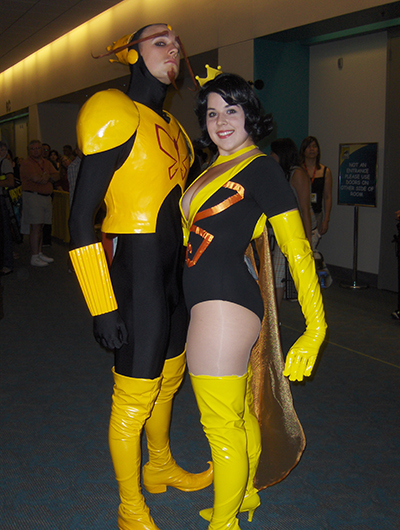 1-What is your name?
Kit

2-How old are you?
22 (yup that’s right you can buy me a drink…should you ever actually see me in a bar…)

3-Do you read comics and if so, what are your favorite titles?
Yuppers, I sure do.  It’s important to read what you’re dressing up as.  I tend to read whatever my friends are reading (because then I can just borrow them!) So I’m reading what Silv’s (Tallest Silver) reading. So that’s plenty of Deadpool!  I also love Gotham City Sirens, and my roommate just got all of Fables so I’m working my way through that.  Oh and I’m finally reading the Buffy The Vampire Slayer comics.

5-Who are your favorite artists or writers?
Bruce Timm and Paul Dini will always live on the top of my list. But I also love Joss Whedon and Adam Hughes.  What can I say I like an artist with a distinct recognizable style, and I can always tell when these guys are working on a book without looking at the names on the cover.

6-What got you into cosplay?
Well I’m a girl who has always loved a poofy dress, my mother couldn’t get me to stop wearing my Halloween costume for weeks after Halloween, so when I grew up I started making my own costumes based off my favorite cartoons.  It wasn’t until my best friend Silver took me to Comic Con in 07 that I officially started cosplaying.  I made three costumes that year and I haven’t looked back.  So thanks Silv for taking me along on this ride!

7-If you do more then one character which one is your favorite, and if you do only one do you have some ideas for more costumes?
Oh man I have to pick just one!  They are all loved for different reasons. ummmm I guess if I had to pick, it would be Harley Quinn, just because with her I get to use a fun voice and she’s the most animated (pun!) of all the characters I do.  I also just love how I get to interact with others as Harley, she’s a total goof and I love how I can be both submissive and dominant as that character depending on who else I’m around.  Also Silv’s my Ivy and we love our dynamic.

8-How long does it take for you to make a costume?
All depends on the costume.  My Arkham Asylum Harley Quinn took a good 90 hours over 3 months, but that one was about 90 percent from scratch.  The only  purchased item on that whole costume was the shirt, which I still had to alter.  from boots to belt, that sucker was custom! Other costumes like Black Widow took about a day or two only because I had to wait for paint to dry.  Generally it’s a good week or two on each costume, but I’m a slow worker. 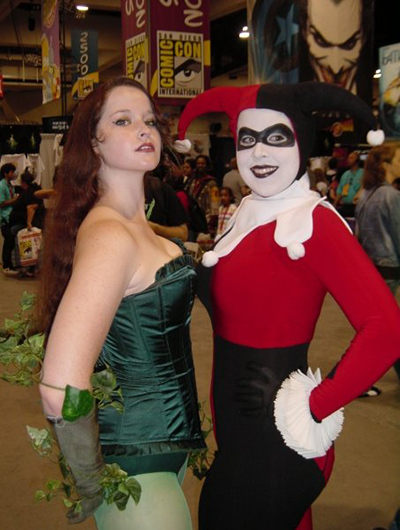 9-Have you met any of the artists or writers where your costume is based on their work?
YES! Oh my goodness that’s a whole lot of the reason I dress in costume.  This year at Comic Con, I had the joy of getting to chat with Doc Hammer and Jackson Publick (The creators of The Venture Bros.) for quite awhile after the Adult Swim panel when I was wearing my Dr. Mrs. The Monarch costume. I also got to hang out with other voice actors from that show (James Urbaniak and Michael Sinterniklaas) over the course of the con.  Then there was the day I did Arkham Asylum Harley Quinn, Paul Dini actually came up to Silv and myself and wanted to talk to us about our costumes! That was soooooo awesome such a highlight of the con.  I also got to talk to Bruce Timm this year while in my Wonder Woman costume which I based off his design.  Silv and I have been able to talk to Bruce Timm and Paul Dini before in our classic Harley and Ivy costumes.

10-Do you buy any toys, busts and etc. based on some of your favorite costumes?
I actually don’t tend to buy those goodies, because well I lack money to do that.  All my funds go into making the costumes.  But that doesn’t mean I don’t drool over them and wish I had them!

11-So do people know you dress up like a comic book hero on your free time?
Yeah it’s hard to avoid if you’re a friend of mine.  At some point you will be called upon to either help me sew a costume while it’s on me, or if we have the same body type, you will be put in the costume and I’ll be sewing on you.  That’s the thing about spandex, sometimes you have to stretch it out before you can sew details onto it.

12-What is the funniest thing that has happened to you at a convention?
I believe Silv has already told this story, but well , it is the funniest thing to happen to us!  Anthony Michael Hall asked us out at the Long Beach Comic Con.  After some contemplation, we decided to go for it because well as she put it ”how often does a teen star of the 80’s ask us out?”  It turned out to be more of a party than a date, but still he bought me a mojito!

13-Do kids come up to you and think you are the real life character?
It depends on the character.  When I’m Snow White yeah generally kids totally believe I’m Snow White.  It’s a ton of fun getting to talk to them and tell them how Mickey said I could go to Comic con for the day, it’s great.  The kids also tend to believe I’m Wonder Woman, but not for the other costumes, but that could be because they don’t exactly know who those characters are.

14-Do you have a website or a MySpace? So people can contact you?
oh man I have sooo many websites haha

feel free to shoot me a message on any of these accounts! 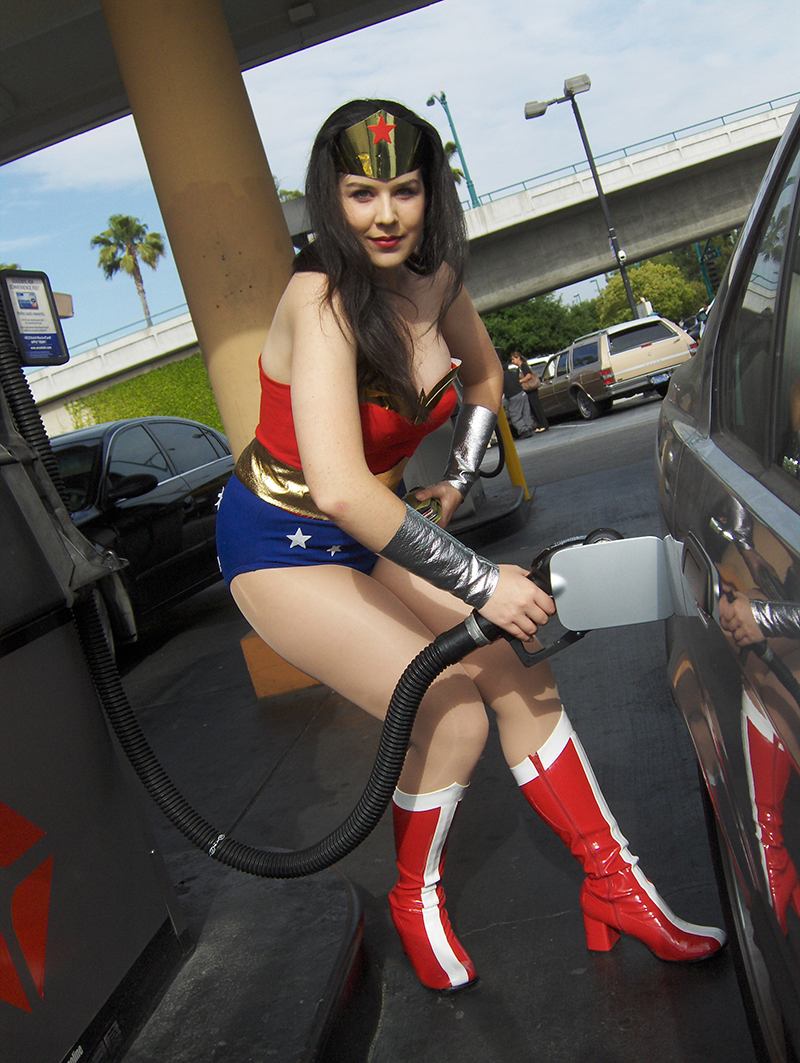 Would you like to be featured as the Cosplay Girl of the Month(NO anime, manga, role-playing games – just comics)? Then drop us a line! We would love to hear from you! We will also be posting a new Cosplay Girl on the 5th of every