The second annual Long Beach Comic Con has now come and gone and it is with a huge measure of relief that I can say that it has not merely bested last year’s event, but gave me every reason to believe it will continue to move in a positive direction as well. And, as strange as it sounds, I’d say it topped last year’s inaugural LBCC just by simultaneously growing larger yet staying essentially the same: by keeping the focus on sequential art, the people who make it, and the fans who love it. 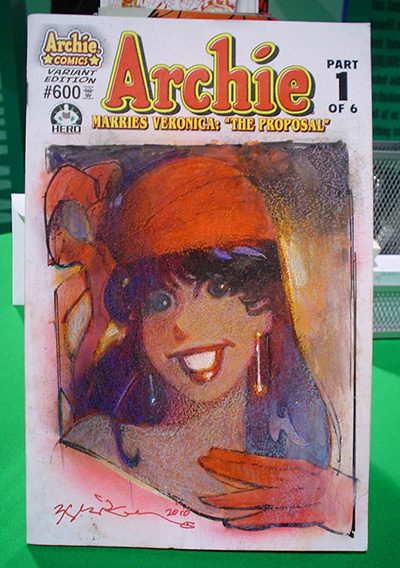 The best thing from my point of view was the generous amount of exhibition space utilized by actual comic creators, both established and up and coming. This is in stark contrast to, say, the Anaheim Con of earlier this year where comics in and of themselves had clearly been forced to take a back seat to throwaway Hollywood junk culture. Tinseltown’s never-ending compulsion to hook it’s fetid tentacles into other areas of media (in the means to consume them) has caused it to infect almost every major and minor convention of the last several years. Yet here at the LBCC, B-list and (usually) below celebrities were kept to a bare bones minimum, and I noticed only one table pushing a studio’s current product. If the former were conscious decisions on the part of LBCC’s organizers, then hats of to them, us comic book fans thank you (although we do all still wonder what the hell a wrestling ring was there for again this year.)

There was a very palpable positive energy in the air amongst the modest (but enthusiastic) crowd so without further ado let’s take a look at some of the people, places & things that made the LBCC a fun time for both the fan and the professional alike.

One of the first tables you came across upon entering the exhibition floor was also one of the most important:The Hero Initiative. This not for profit, federally funded charity assists comic industry veterans in need, be it helping them find medical aid, financial support for the basic necessities needed for living, and getting them work once again in an industry that owes these great creators another chance.

The Hero Initiative frequently offers donated items up for auction and several pieces were on display at the Con. Among them were several “virgin cover” issues of Archie #600 with original art supplied by numerous industry pros. Of these the best was easily this sensational fully painted piece by Bill Sienkiewicz featuring Archie’s fiance Veronica as Elektra.

I’m a big fan of Sienkiewicz’s Elektra work (and have always thought that Veronica is basically the cutest character in all of comics) so naturally I really, really wanted to win this book. Not surprisingly, my feeble bid was not even close to the winning one (final sale price $522.00), but that’s fine with me because the more money that goes to this great and vitally important charity the better. 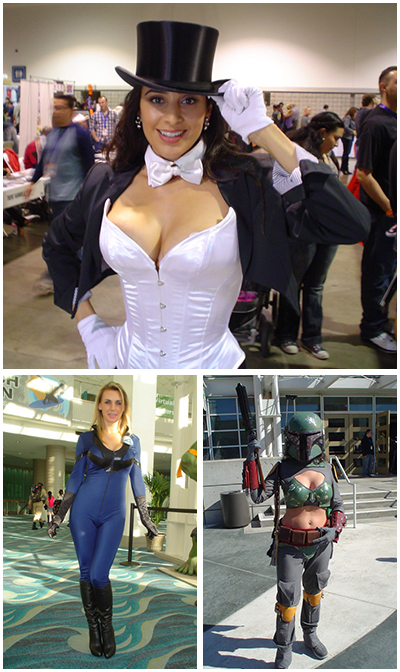 I’m going to use a “on the topic of cute girls dressed as a character” segue to showcase some of the great cosplayers that were out in force at the convention. This is to pay tribute to the women themselves and the level of craft they put into their outfits (and also to make sure I still have your attention.)

Not only was this attendee’s outfit accurate down to the tiniest detail, but she looked incredible in it, very much as if the popular DC character stepped directly out of the comic page and into the “real” world. So much for people who claim that women are unrealistically depicted in comics because an artist is able to present them in any idealized way that they wish.

No disrespect to the great superheroes and heroines in attendance, but North American cosplayers very heavily lean towards capes and tights or Star Wars heroes and villains, and as such it’s great to see others dressed up as characters from outside of those expansive universes.

As mainstream super-heroics continue to get bleaker and bleaker it’s no wonder some creators look to the Silver Age for inspiration. One young company doing just that is Silver Comics who is clearly having fun with that era’s gleefully over-the-top aesthetics.

Also published by Silver is the pulp paperback The End, the debut novel from writer Michelle Bryson. Set in 1933 New York, an influx of the supernatural has begun to swarm into the city from the underworld and it is up to the skull-clad hero The End to save the city from itself. This is a very entertaining read, highly recommended for pulp fans, and the book also contains great spot illustrations by comics veteran Frank Brunner. Join The Skull Army and check out Michelle’s book today!

Not long ago I wrote a piece on the creators appearing at the LBCC to make sure to  say hello to. I hope you took my advice, particularly in the cases of Mark Dos Santos and Tim Vigil. Mark is an extremely talented comic artist (and all around nice guy) whose work has been seen in titles such as Eureka, Cthulhu Tales, Grimm Fairy Tales, and It! The Terror From Beyond Space.

And then we have the supremely talented Tim Vigil. Some of the very best pieces of art on the entire convention floor were undoubtedly found within the pages of Tim’s portfolio. Some people have very unjustly dismissed Vigil’s output as a whole merely because of the violent and sexual nature of the work he is most known for (the adults only horror masterpiece Faust, for example.) For those who can appreciate great work at face value the reward is huge. I spoke to several people at the Con who were completely in awe of the artistic virtuosity displayed in Vigil’s astonishingly detailed imagery. 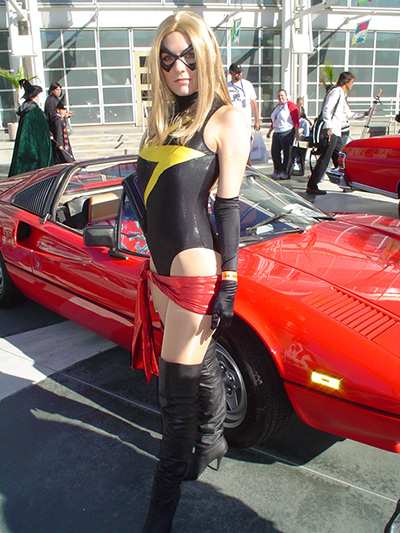 Another plus of the LBCC is it’s location. Though not far from Los Angeles, Long Beach is generally free of L.A.’s polluted toxic haze and aggressive personality. The three days of the Con were beautiful and sunny and there were many interesting to be found outside as well as in. Several classic cars from (and inspired by) film and television were parked nearby, including KITT from Knight Rider, Magnum P.I.’s Ferrari, and the supremely bitchin’ Gran Torino from Starsky and Hutch.

The weekend also saw two different screenings of Thomas Jane’s directorial debut Dark Country. A film noir with supernatural overtones, what makes the film even more unique is it is filmed in 3-D. This is all the more interesting given that it was made three years ago, well before the recent 3-D boom. Also noteworthy is that it uses 3-D for both psychological effect as well as the more expected “coming at you!” jolts. The second screening of the weekend featured (often hilarious) live commentary from Jane and Bradstreet proving that they are good enough sports to play Mystery Science Theatre 3000 with their own movie.

Another interesting panel was with Mike Mignola, devoted entirely to q&a between the artist and his fans. I asked him about his early assignment doing the comics adaptation of the Francis Coppola Bram Stoker’s Dracula film. I had no idea this would lead to numerous hilarious stories regarding Mignola being brought in late in production as a conceptual designer and anecdotes about George Lucas and his head scratching suggestions to Coppola on how to improve the film after seeing a rough cut.

Acclaimed fantasy author Peter S. Beagle recently saw his fantasy classic The Last Unicorn adapted into a very nicely produced comic mini-series courtesy of IDW. He was on hand to speak with fans about his incredibly prolific and successful career as well as his next comic book project, an adaptation of his 1960 debut novel A Fine and Private Place (also with IDW). 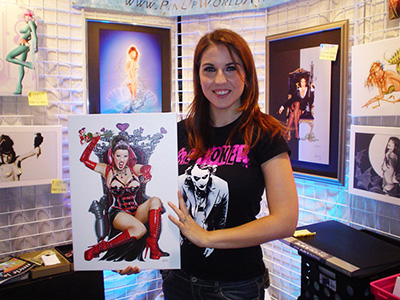 There is always something extra unique about a beautiful female artist whose subject matter of choice is the female form itself. In the 1950’s and 60’s Bunny Yeager was arguably Playboy magazine’s best photographer. The 70’s and 80’s saw the rise of master pin-up artist Olivia de Berardinis. Today there is a whole new generation of women artists applying their talents to often fantastical interpretations of feminine beauty. One whose work is especially colorful and eye-catching is Nicole Brune for more on her and her contemporaries see here.

A number of other great illustrators were also on hand including Ruben Martinez whose work I first saw at the Zombies In Love exhibit at Gallery Nucleus in L.A. earlier this year.

At the end of last weekend, as the sad sight of exhibitors and sellers bringing down their booths began, I found myself wishing the 2010 Long Beach Comic Con could be just one more day. Though this event is modest in size it makes up for it in the quality and stature of the professionals that attend, and even being there all 3 days was not enough to cover all the ground I wanted to. 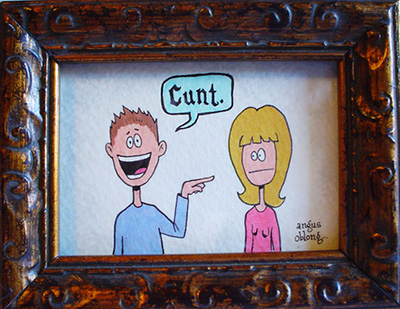 Which brings me to my last item to report about the weekend, concerning the obscenely funny cartoonist Angus Oblong. He is best know for creating the animated series The Oblongs which still runs in heavy rotation on Adult Swim despite there not being a new episode since 2002.

My current limited fiances for items for which I use the blanket term “cool stuff” is limited these days. As such I did not expect to leave with any original art save for perhaps (free) additions to my sketchbook. However, since he is such an awesome guy, Angus let me have the nifty little framed original  for next to nothing after remembering me from a past con. Thank you, Angus! You are rad.

Well! I think that’s a good way to wind down my overview of the second annual Long Beach Comic Con, so in closing I’d like to say that I had a great time and very much look forward to next year. A little birdie told me that the noticeable emphasis on comic art and artists and the lack of Hollywood’s over-bearing presence was not a coincidence, but a conscious effort on the part of those who make such decisions for the event. If this is true, and this ethic remains for future LBCC’s, people might one day be saying that “this is what San Diego used to be like.” I guess only time will tell….