When writing about a site of recent historical significance, recent enough that those who were present as witnesses or participants to important events held there are likely still alive, you are not going to be able to please everyone. The beyond legendary New York music club CBGB is one such locale whose cultural impact on the musical spectrum of the last 35 years is so great it could never be given due justice in print or on film no matter how good the effort may be.

This brings us to the newly collected four-issue CBGB comic series, courtesy of the Boom! Studios imprint Boom! Town. The chance to mix the mythology of the club that launched The Talking Heads, Blondie, The Ramones, Bad Brains, Patti Smith, and The Misfits (amongst many others) with words and vivid imagery sounds like a certain win. Still, as with almost any anthology comic there are bound to be a mix of highs and lows. Unfortunately with CBGB more of the material falls into the latter category. 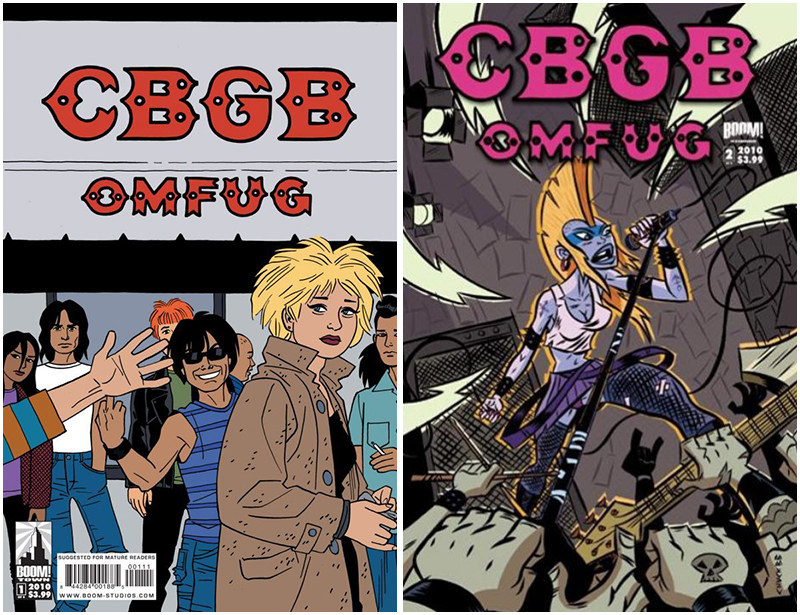 The debut issue couldn’t possibly get off to a better start with a fantastic cover by Love and Rockets co-creator Jaime Hernandez.

Our first story confronts the issue of the club’s mythology versus it’s factual reality (and what it means to the current generation of wanna-be rebels) in A NYC Punk Carol from writer Kieron Gillen and artist Marc Ellerby. Here band leader Stooge (a nice mix of a sincere and earnest dreamer and punk/hipster douchebag) complains to his mates about the musical legacy of NYC hardcore that they’re not living up to.

Soon Stooge is set on the right path with a visit from three ghosts, a la Dickens, each with a lesson to impart to him about the importance of what happened at CBGB’s and what it means to those youngsters who want to keep the Punk flame burning. I really like the bickering between the ghosts who between them represent the importance of both the myths of the locale and the more academic truths involved as these are things that tend to weave in and out of each other over the passage of time

The choice of depicting the performer being shown with a label obscuring their face is a nice touch, seemingly a nod to the punk ethos of putting the emotional intent of the music over the surface nature of image.

I am a very big fan of rock music history and as such loved the numerous appearances of Punk and New Wave luminaries seen in A NYC Punk Carol. Imagine my disappointment as there are (with the exception of passing references) NO OTHER “real” legends featured in the entire run of this mini-series. More on that shortly.

The Helsinki Syndrome, the second story of the debut issue from Sam Humphries and Rob G, tells of late 70’s punker Larry who has his plans to see Television play swept aside by the death of his Uncle. He is left with the unpleasant task of cleaning out his deceased relative’s cluttered apartment which turns out to be filled with recording instruments and scrawled upon homemade cassette tapes.

Later, at the club, Larry learns his Uncle was a one man musical force called The Helsinki Syndrome who single performance at CBGB’s left an indelible mark on the few who saw it. The flashback reveal is really wonderful here as the sketchy (in a good way) art gives way to a slick, dramatic double-page splash of the Uncle on stage whipping up sonic blasts like a tempest of noise.

This tale would carry a lot more emotional weight if The Helsinki Syndrome had actually existed. Fleshing out the legend of CBGB’s  with scenarios both real and imagined would be to the benefit of this mini-series if there was, by the end of the run, more of the former and less of the latter.

The first story of issue 2, Rock Block (written by Scissors Sister singer/songwriter Ana Matronic with nicely expressive and detailed art by Dan Duncan) proves itself to be the best feature of the entire run of this series. Though the main character, an aspiring writer who finds herself lacking in both inspiration and cash, is fictional the New York City that surrounds her could scarcely feel more real and true to the era. Set in the 70’s, this is the New York that certain natives of the city lament the passing of in more recent years, the one Travis Bickle angrily, endlessly obsesses about. And at the nexus of our writer’s universe is CBGB’s.

She finds her muse in the guise of the club itself and the patrons and performers she finds there. And along with her inspiration comes renewed faith in the city itself. Matronic’s story feels so real because of it’s utterly believable humanity. It is also basically the only one of the series that makes note of the grittier aspects of the scene such as hard drug use. Much of the material found in these issues just seems too candy coated to be a realistic portrayal of this particular pace, during this particular time.

Speaking of candy coated there is the vibrant closing story of issue 2, Oozi-Suzi-Q-Tip, a borderline psychedelic, neon colored foray into all style/no substance territory courtesy of Mr. Sheldon. 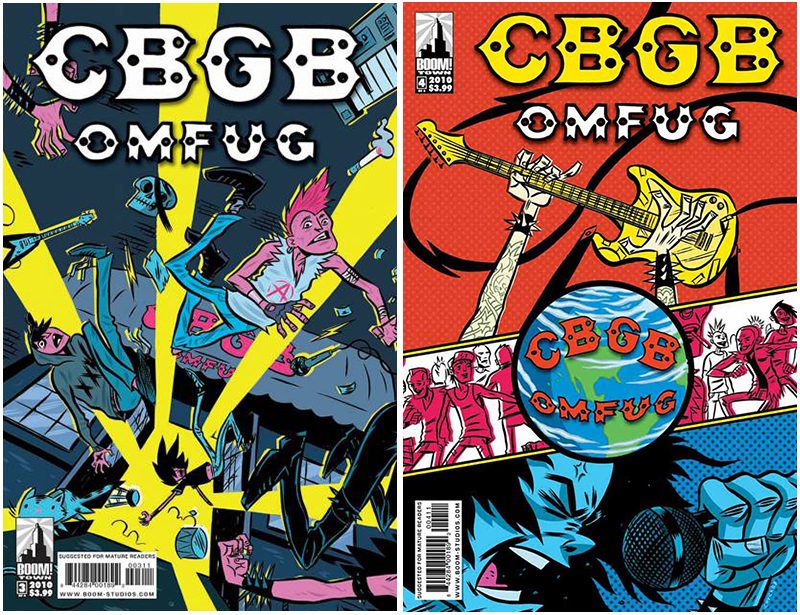 Issue 3 opens with the self-indulgently titled Of And Concerning The Ancient, Mystical, And Holy Origins Of That Most Down And Dirty 20th Century Rock ‘N’ Roll Club. The story draws upon Native American spirituality and concerns three club goers stumbling upon a secret, ancient history of the site where CBGB stands.

Spanning an entire 14 pages, one can’t help but feel this space could not have been better utilized with a piece more specific as to why CBGB’s is truly considered the sacred place it is (or was, since it closed its doors permanently in 2006.) With a change to the opening and closing pages this could just as easily be a story about any historically significant rock venue that became a focal point for a youth movement, such as The Fillmore in San Francisco. Even more baffling is that this is written by the most accomplished scribe of this whole series: Oscar nominated screenwriter Kim Krizan who lists amongst her credits Richard Linklater’s Before Sunset and Before Sunrise. Still, the art here is very pleasing to the eye and even quite beautiful in its best panels.

The myth-making is thankfully left behind issue 3 closes with Advice To A Young Artist, a fun, somewhat Twilight Zone-esque story about a college professor who, in a stoned-out daze, actually returns to the CBGB’s of his youth. In his excitement to see the Nick Ryder (a fictional performer, again) in his CBGB’s debut, the prof ends up unintentionally sabotaging the show, thereby changing music history.

This story (written by Robert Steven Williams with art by Louise & Georgio Staley) is a fun, entertaining detour from the direction the series is taking by this point and also might contain a bit of a message about how seemingly tiny, insignificant moments for us can have a life-changing effect on another.

The opener for issue 4 is Count 5 or 6 by Kelly Sue DeConnick and Chuck BB. Here CBGB in and of itself is relegated to the status of background character in favor of an (autobiographical?) story of self-involved New Yorkers, both native and transplants.

If this is an autobio tale (DeConnick did live in Manhattan at one point) the creators really do not need to be so coy about it, as knowing if the story is fiction or non-fiction would dramatically change the emotional dynamic for the reader. Yet another 14 pager that does little to explain the mystique and special nature of the club or introduce us at all to any of the legendary talent that helped make its name. This story could basically be taking place at any music venue and play out exactly the same.

The series ends on a colorful note with a sci-fi story (of all things) titled No Future. In it an agent from the future is sent back to a late 70’s CBGB’s to record the scene for the sake of cultural analysis. The story (by R. Eric Leib) is serviceable and I appreciated the positive note it ends on, as it seems to be heading in a colder direction up to that point. But what really stands out here is the loose and vividly colored artwork by Dave Crosland. The energy in some of the panels is downright infectious making the images almost vibrate right off the page itself.

All in all there is a lot of fun, solid work to be found in the pages of CBGB, but the frustrations found within the weaker material really puts a damper on the festivities. It’s baffling why so little space is utilized for representing true to life tales when the subject itself has such a rich, exciting and significant place within the annals of 20th century music. The series itself has been pretty successful  for a mature readers indie title so I’m hoping this is not the only time we see CBGB in sequential form. I just hope next time there is a little more blood, sweat, and tears to help mix up the all the idolatry.