For fans of the legendary alternative cartoonist Charles Burns patience is a virtue. His meticulously produced work within the comics world has become less frequent through the years (Burns is always in demand for his high profile illustration work) with his last major book being the publication of the collected edition of his mood-drenched masterpiece Black Hole in 2005. However, his admirers now have their patience rewarded in full with the recent release of X’ed Out, a beautiful, full-color, oversized, 56 page hardcover from Pantheon Books.

The first of a trilogy of graphic novels, X’ed Out features all of the hallmarks that have made Burns so celebrated within the sequential art field: creepy, dream-infused narratives in which characters are at the mercy of their own troubled minds and/or bodies and staggeringly crisp, high-contrast artwork that features his famed razor-sharp inks.

In X’ed Out we find a young man named Doug recovering from an unspecified head injury in his parents house. Doug is attempting to cut back on the dosage of the prescription he is taking (the dislocated, medicated state caused by this is what the book’s title is in reference to.) Besides possibly amplifying Doug’s fragile emotional state, the drugs may also be dialing up the intensity on the vivd and bizarre world of his dreams.

The surreal dream passages form the second narrative of the book, one that continually overlaps with the real world. In his dreams Doug (who here bears a remarkable resemblance to that all-time classic comics character Tintin) finds himself in a devastated, barren landscape that borders a Cairo-esque village. A variety of strange denizens inhabit the area including highly volatile lizard-men with whom the confused Doug has nearly violent run-ins with.

Pushing the intertwined nature of the criss-crossing realities of the story is that Doug’s medicated current state is infused with recent memories concerning his parents, his former girlfriend, and the object of his true affection, Sarah. Sarah is a photographer whose featured subject is herself in various dark scenarios concerning things like bondage and self-mutilation. Potential danger hangs heavy around her in the form of her violent (and as of yet unseen) boyfriend.

What makes X’ed Out unique from Burns’s past work is the previously mentioned allusions to Herge’s Tintin. On a purely surface level there is the format of X’ed Out: like the numerous Tintin books it is a slim, 9×12 format hardcover that gives us a full, satisfying chapter of a grander narrative which the next book will always picks up from. Also, the egg on the cover of X’ed Out itself recalls the extraterrestrial mushroom seen in The Shooting Star. 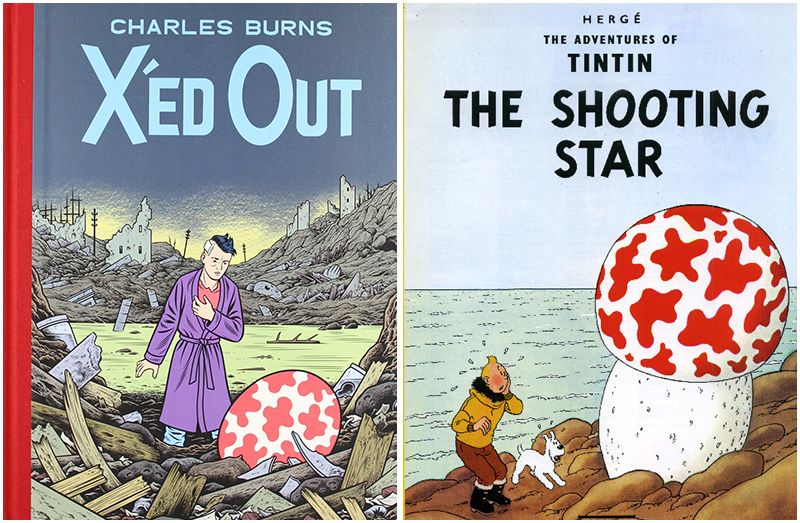 Doug occasionally does public readings of William Burroughs while wearing a Tintin-esque mask, while in his dreams Doug’s visage takes on the features of the mask and makes it flesh. The famous French character is referred to in X’ed Out as Nitnit, and even Tintin’s dog Snowy has a counterpart here in Doug’s deceased cat Inky, who appears regularly in his dreams.

The exotic locale of Doug’s unconscious mind also recalls the setting of any number of Tintin’s globe-trotting adventures even if the following dining opportunity never quite presented itself to Herge’s hero.

Though X’ed Out is brief by way of page count, it is exhausting in terms of the sheer amount of visual information and complex narratives there are to absorb. Though the book is an extremely satisfying reading experience, it being the first of a trilogy leaves the door open to many (at this point) unanswered questions: What exactly is the cause of Doug’s injury? Are the ceaselessly threatening lizard-men subconscious stand-ins for Sarah’s unbalanced boyfriend or is Doug’s dream world in fact more real than we currently believe? Is there a deeper reason for the Tintin references or is Burns simply having fun using the classic Tintin template for adventure storytelling and filtering his own dark visions through it?

It is impossible to say when the next installment of this new masterpiece in the making from the brush of Charles Burns will materialize, but quality over quantity is always the name of the game when speaking of the absolute best and most brilliant creators in the comics field.  Burns can take all the time he needs because the results will always be more than worth the wait.