Cosplay Girl of the Month: January 2011

One of the features we do here at Comic Impact is the cosplay girl (NO anime, manga, role-playing games just comics) of the month, that’s  right hot girls dressing up like your favorite super- hero characters. This month we’re privileged to have  Psykitten Pow  for this months Cosplay Girl of the Month! 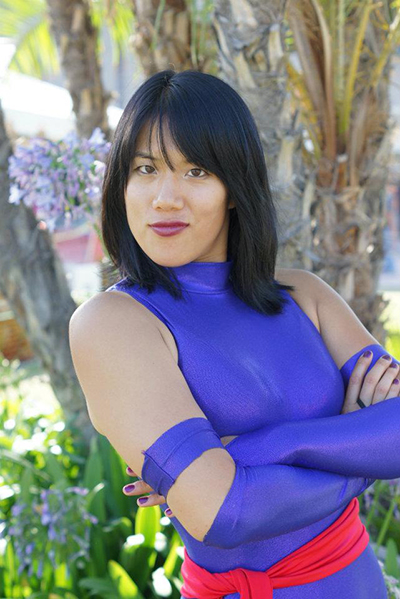 1-What is your name?
Psykitten Pow

3-Do you read comics and if so, what are your favorite titles?
Well, I read “Gotham City Sirens” of course, as well as “Batman: Streets of Gotham”. I also pick up the odd one-shots here and there, and I make grabby hands at the X-series when I can. Once I make the big time and I’m rolling in the monies, you can bet your sweet sweet candy that I’ll be reading a lot more.

4-What is your favorite comic book character?
First and foremost, always and forever: the Goddamn Batman. He’s the reason I ever got into comics! I also love Beast – intelligent men are so damn hot. As for the ladies, Catwoman and Cassandra Cain are my favorite women in comics. They’re beautiful, opinionated, disciplined, and can lay out the beatdown!

5-Who are your favorite artists or writers?
I love Paul Dini and Bruce Timm; those two produce such fantastic work, both individually and as a team. Jim Lee and Dustin Nguyen are also beloved artists of mine, and Joss Whedon wrote the best X-Men team ever, in my humble opinion. For non-comic artists, I love Nidhi Chanani and Pascal Campion’s work. They are magnificent at creating art that is simultaneously adorable and poignant, with a great eye for lighting and space.

6-What got you into cosplay?
Everyone, quick, look at Roxanna Meta and blame her for my addiction! I met that gal my freshman year in college and instantaneously envied her kickass costumes (Guinevere being her main project when we met), and the way she brought the boys to the yard with her skills and charisma. I wanted to play with the cool kids too, so I got to work.

7-If you do more than one character which one is your favorite, and if you do only one do you have some ideas for more costumes? Oh what, I can only choose one?
I love all of my costumes for different reasons, but I currently really dig my Flash costume – Wendy West, as a good friend dubbed her! She’s a serious labor of love and one that I dreamed of making for years. She was partially inspired my dear friend, May ‘09’s Cosplay Girl, LTC America. Most importantly, my interpretation of the Flash allows me to act the most like myself, and I love that I can make so many silly faces that otherwise would look really out of character if I were, say, Catwoman.

8-How long does it take for you to make a costume?
The process is long and convoluted, but most of the costume is cobbled together in five or six weekends of intense crafting sessions (with a lot of whining at Mia Ballistic and Roxanna Meta for help). Gathering materials takes the longest, so I’ll have to make sure I know what I want two months before I start actually building, and go on many shopping trips or place the order online. Then come the weekends that involve a lot of snipping, sewing, gluing, staring slack-jawed at reference pictures, yelling, and coffee. And then, after the initial costume is built, I may spend years altering little things here and there – Catwoman has been around since 2005 and she’s still going through minor changes! 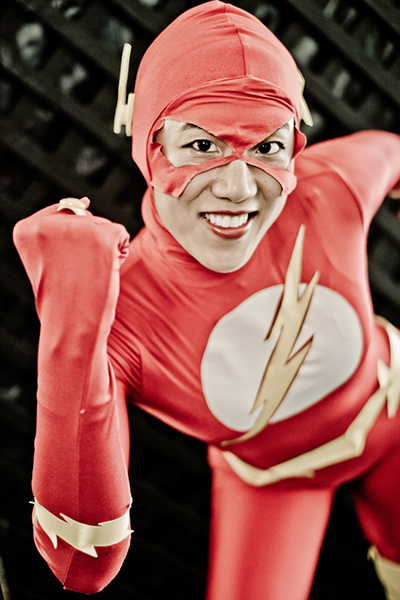 9-Have you met any of the artists or writers where your costume is based on their work?
I had the honor of meeting Jim Lee as Psylocke, and Bruce Timm as the Flash. Both of them seemed pretty blasé about the experience, but then again they already had several tiring hours at the convention before I came squealing up to them. Jim Lee did give me what I hope was an approving look up-and-down though!

10-Do you buy any toys, busts and etc. based on some of your favorite costumes?
Unfortunately, I’m not very good with toys. I end up sitting on them or something. I love examining toys and the like at conventions, but I much prefer buying prints and sketches from artists. My room is covered in them!

11-So do people know you dress up like a comic book hero on your free time?
Nearly all of my friends and family are marginally aware that I partake in such silly shenanigans, thanks to The Facebooks. When I left my last workplace in 2008, they made me give a parting presentation on the world of comic conventions and cosplay! I am also fortunate enough to be very good friends with some of the most disco, talented cosplayers and people that are out there:  Roxanna Meta, Mia Ballistic, Tallest Silver, Kit Quinn, and LTC America! Those cats know how to get down, and when us ladies get together, we’re deadly!

12-What is the funniest thing that has happened to you at a convention?
At Wondercon 2008, Roxanna and I were posing for pictures as Black Canary and Catwoman, respectively, when an Indiana Jones wandered into my sight. He had a bullwhip, so naturally I called out to him and cracked my own whip to get his attention. Immediately, the wall of people that had been snapping pictures gasped collectively, and I turned to see Roxanna clutching her face. By sheer dumb luck, I had caught her eyelashes with the end of my whip, and took them clean off! I thought I had taken her eye out though, so we rushed to the bathroom to make sure she was okay, and once we realized what had happened, rolled with laughter. I bet somewhere out there, there are some really horrific and hilarious photograph sequences of the whole thing.

13-Do kids come up to you and think you are the real life character?
I think some of the younger ones have believed I’m the real character, which is adorable. Even the ones who don’t quite buy it are cute, though. And then there are the adults that immediately revert back to children…

14-What do you like to do when you’re not costuming, such as other hobbies?
If I can’t be out rabble-rousing in costume, I want to be rock climbing, dancing, or surfing. My longboard, Jim, is the love of my life and I take every opportunity to go on beach dates with him. I am easily entertained by Internet memes and such nonsense, and I also enjoy following dogs around and narrating on their behalf, a la Dug, from “Up”. And while work may not be considered a hobby for most, I am so very fortunate to have my work be something I utterly love, and I do devote a lot of my time and energy towards my career.

15-Do you have a website or a MySpace? So people can contact you?
One can find me on the aforementioned Facebook, as Psykitten Pow. I also run with a costume group called United Underworld, and that website can be found here: http://unitedunderworld.weebly.com

Thank you for having me, Comic Impact, and thank you to Al Ng, Efecss, Rendy Lai, and Mike Rollerson for the amazing photography! Thank you for reading and being the reason why I love this hobby so much! Zoomy love to you all! 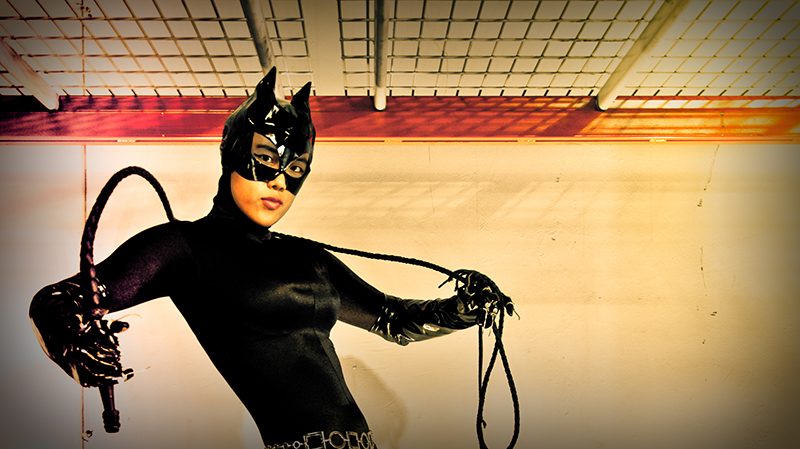