When Marvel’s 2009 indie-comics superstars meets time-tested superheroes mini-series Strange Tales was released it seemed almost too good to be true. This highly unique assemblage of oddities was so pleasingly originally and off the typical spandex path that a follow up seemed implausible at best. Happily, fans of the publisher didn’t mind seeing their favorite heroes taking a good natured (and overdue) ribbing and the series was a surprise hit. Now we have the three issue mini-series Strange Tales II and the hit versus miss ratio is even more solidly in the positive here than it was for its predecessor.

In any anthology there is a need for a strong opening story, one that ensures you’ll be hooked and continue reading (and buying future issues, naturally). Here issue one opens with what will be one the very best of the whole mini with the blood soaked Wolverine story VS by Mesmo Delivery creator Rafael Grampá . If self-regenerating superheroes were real this is what the public would likely wish to see: them ripping each other apart in a wrestling ring only to heal and repeat the act the following night for the sake of our own entertainment. 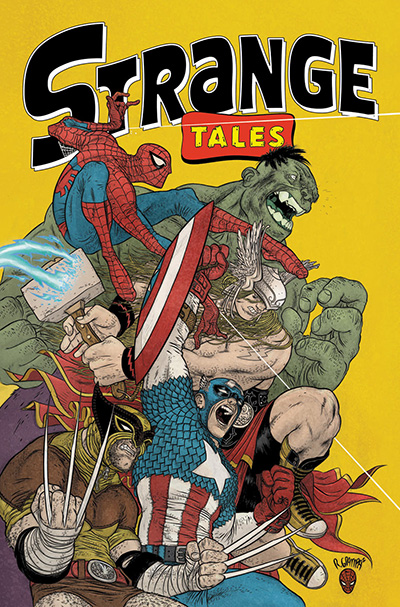 We learn that Wolverine’s need for sadism follows him to the bedroom as well, as a letter from a lost love sparks memories of violent lovemaking wherein the woman repeatedly stabs him during sex..

Even though Marvel’s Max imprint is known for its bloody output, harsh sexual violence is rarely touched upon, and to see it dealt with so graphically here, with one of Marvel’s most popular and established characters, is jarring to say the least.

Ultimately, Wolverine’s gory dominance in the ring means nothing as we learn his existence is ultimately lonely and emotionally hollow. This kind of risk-taking, visceral, character re-examination is perfect for a bets-off title like Strange Tales II and VS in particular is just that through and through.

Comedy is the name of the game for many of the stories in the series, and A Distraction by Kate Beaton and Bill Crabtree is, hilariously, just that. Here, the ceaseless hunter Kraven is on the prowl for that most elusive of prey: a date.

Too Much Coffee Man creator Shannon Wheeler amusingly re-casts Nazi villain The Red Skull as a loving provider for his family and tropical village. Unfortunately, he finds himself at the hands of Captain America anyway, as his attempt to protect his people from developers gets him labeled as an eco-terrorist.

Dash Shaw provides an exciting (and beautifully watercolored) Spider-Man story that smartly doubles as a commentary on the effects of Hollywood fame with The Marvel of Mysterio.

Jeff Lemire, of Essex County and Sweet Tooth fame, likes to set his work in naturalistic surroundings. It comes as no surprise then that his Strange Tales II offering is the wilderness set Canadian mountie story A Civilized-Thing featuring the classic Marvel horror character Man-Thing.

Jhonen Vasquez’s rise  to cartooning fame was fast with the gloom and doom crowd via his darkly hilarious Slave Labor titles Johnny the Homicidal Maniac and Squee. Later, Vasquez created animated series Invader Zim further endeared him to the Hot Topic set. After a long break from comics, Vasquez returns with the very funny Wolverine tale Meanwhile…In The Park!!! Here we see a bloated, heartbroken, and blubbering Wolvie not exactly living up to his own image for two ecstatic young boys. Extra points awarded to Vasquez for having one of the annoying kids being incinerated by a Sentinel.

Strange Tales II number 1 closes strong with a quick two page gag by the brilliant Nicolas Gurewitch of The Perry Bible Fellowship fame. Gurewitch entry from the first Strange mini-series, about Wolverine going after a certain fellow X-Man after finding a blue hair in his girlfriend’s bed was the single funniest thing in the book. Here we find an eager Magneto offering his service to Galactus himself. Unfortunately for Magneto an all powerful being would only have a practical household use at best for someone such as him. I also really like that, in his down time from wiping out countless millions of lives, Galactus like to relax with the new Cosmo.

Strange Tales II is that rarest of things in the comics world: a title that can be equally enjoyed by both indie fans and Marvel zombies alike. This April will see the publishing of a collected edition of Strange Tales II. If you’re a bit too impatient for that you could simply get the full three issue run now, and also please join me for the next installments of Sequential Sunday as I take a closer look at the best work found in issues #2 & 3 of this insanely oddball, and utterly entertaining series!