What happens when alternative comics superstars meets the world of capes and cowls? The second issue of Marvel’s Strange Tales II that’s what! Things begin incredibly strong right out of the gate courtesy of a cover by Love & Rockets co-creator Jaime Hernandez. Long known for his ability to draw gorgeous women via his beautifully clean line work, it’s great to see him portray some of the ladies of the Marvel universe in his trademark style.

Gilbert Hernandez, Jaime’s brother and fellow Love & Rockets contributor, delivers the opening Iron Man adventure, very appropriately titled Old-School Rules. In it, a decidedly pre-sobriety Tony Stark is visited by Toro (sidekick to the original Human Torch) to help him on a mission against The Leader. 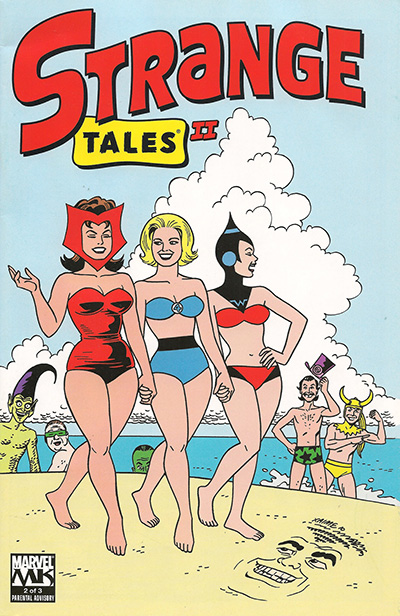 Clearly having fun with a character he read as a child, Hernandez offers a story that  parodies silver-age super-heroics while still being an exciting story in and of itself. Also, I really like the fact that Stark, with his 70’s mustache and drawn in Gilbert’s signature style, looks a bit like he could be a resident of Palomar, the Central-American town where many of Hernandez’s celebrated Love & Rocket tales take place.

The Los Bros Hernandez love continues as Iron Man intrigue turns to beach blanket hi-jinks when the cover scenario plays out in Jaime’s Love and the Space Phantom. The story’s infatuated villain attempts to crash the seaside shindig of numerous Marvel superwomen disguised as those of their own.

It’s unique to see such familiar Marvel characters engaged in some good-natured fun as opposed to the straight-faced, overly serious nature of the stories they are always embroiled in. Jaime’s beautiful art (combined with Laura Allred’s great coloring) make for what is the most visually appealing entry of the entire mini-series.

Later, while bemoaning the fact that he always has to be the one to save everyone’s ass, Wolverine is promptly and completely wasted by a Sentinel’s blast. I’ve always wondered how much heavy damage Wolverine can take and still regenerate so easily. I think Brown may have given us the answer.

A self-admitted big fan of the X-Men, Brown has provided the funniest parody to be found in the pages of Strange Tales II. Great stuff on par with Brown’s dead on Transformers parody The Incredible Change Bots.

Sheldon Vella re-imagines The Spirit of Vengeance as one particularly fiery member of the NYPD in the vivid Ghost Badge. Infusing his 4-pager with all the visual fireworks he’s come to be known for, Vella shows us a Ghost Rider that may not ride a Harley, but is still the heaviest and most metal the character’s been in years.

Asgard’s favorite son is taken down many notches courtesy of Tony Millionaire, creator of the brilliant alternative comic strip Maakies (which has recently been given the animated treatment via Adult Swim’s The Drinky Crow Show). The Mighty Thor, who has at this point lost his powers, finds himself relegated to the position of a midway carnie. When not saving rowdy park goers, he is seen lost in thought, daydreaming of his lost hammer and cans of pickled herring.

Strange Tales II wraps up in an appropriately off-kilter fashion with Crisis in the Land of Modok by Jon Vermilyea. When The Avengers fall at the hands of the villain, the diminutive Ant-Man is the only one left to save the day. I really like that we get to (finally!) see Ant-Man utilize the only aspect of his powers that is a sure fire maneuver: shrink down, go inside a foe’s body, and return to regular size.

Seriously, if Ant-Man just used this move in every skirmish, wouldn’t he be the most winning (and twisted) hero in the entire Marvel Universe?

So ends this look at the highlights of the second of three issues of Marvel’s superbly wigged out Strange Tales II. Bear in mind that there is even MORE material in the individual issues than what is represented here. For the full skinny on the “indie-artists meets super-heroics” titles, I highly recommend picking up the deluxe Strange Tales II collection upon its release this coming April. In the meantime, join me again soon for an extended look at the third and final issue of Marvel’s Strange Tales II.