Welcome back for this, the third and final article on the three issue indie/mainstream mash up Strange Tales II. To me the most unique aspect of this mini-series is in seeing alternative creators working with characters and situations completely opposite from what we have come to expect from them. The cover of ST II #3 is a supreme example of this in which Schizo creator Ivan Brunetti presents us with an adorable look at a superhero-centric health club, complete with aerobicizing X-Men and a pool-diving Daredevil.

But going against the preconceived grain is not all that ST II is about. James Stokoe, who is fast becoming popular via his Image title Orc Stain, provides a straight-forward story featuring Silver Surfer, Galactus, and a gang of doom accepting Skrulls. This brief tale is far removed from parody or character revisionism and stands on its own canon-like terms. Not to mention that the opening page of the story is one of the most mind blowing pieces of art in the whole series. Most artists that depict Galactus fail to capture the enormity of the scale of his destruction effectively. Not so here… 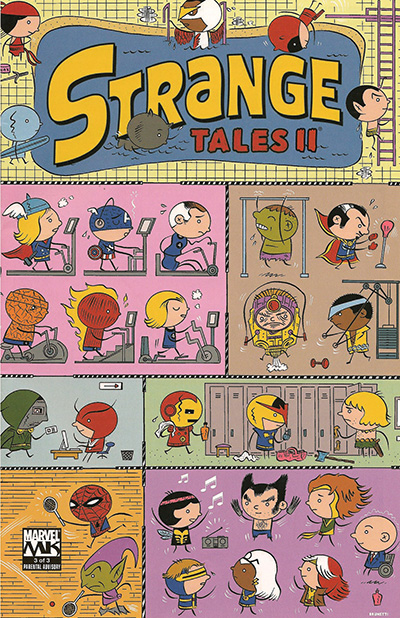 Switching gears entirely, we come to U.S. Agent vs. The Terror-Saur courtesy of Gangsta Rap Posse creator Benjamin Marra. Here we see Captain America’s on-again, off-again rival U.S. Agent living the dream with some college coeds, when he is informed about a terrorist… a terrorist whose DNA has been spliced with a velociraptor… and who also happens to have a nuclear device strapped to himself. The enemy is soon located and neutralized thanks to U.S. Agent and a firearm previously owned by The Duke himself.

Marra uses U.S. Agent to comment on America’s “my way or the highway” attitude given even when we’re not on our own soil. Plus, there’s always been something very right wing-y about U.S. Agent anyway.

Highly melancholic comedy ensues when Tim Hamilton gives us his take on “The Robot with a Soul” in Machine Man: Ectoplasmic & Mysterious Occurrences Investigator. Much of the humor here is derived from the overly mopey introspective reflections of Machine Man about himself, reflections which are bluntly reinforced by the human characters.

Summoned to investigate the deaths of several young girls in a mood-drenched countryside, Machine Man ends up confronting Morbius the Living Vampire and even Baphomet himself. I really like that the overly logical Machine Man refuses to accept that vampires exist, instead accusing Morbius of suffering from a “Goth illness”. It’s Emo vs. Goth — Marvel style!

ST II #3 does have some weak links. An eight-page Thor story proves to be a fairly lifeless comedic affair which is all the more surprising as it comes from the pen and brush of Terry Moore, acclaimed creator of Strangers In Paradise. Additionally, the bridging Watcher stories by Nick Bertozzi that open and close all three issues of the series seem superfluous by nature as an anthology that has as many free-form shifts in tone as ST II does not need a unifying thread to tie all the oddness together. I’m convinced Bertozzi’s pages would read better if combined into one single story.

However, the great thing about a quality anthology is that the presence of a story that the reader doesn’t particularly care for does not linger as one moves on to another more enjoyable bit. And there is much more to enjoy in ST II #3 including contributions by Dean Haspiel, T. Cypress, Alex Robinson, Kate Beaton and Nick Gurewitch.

With any collection of short stories it’s always important to go out on a high note, and ST II saves its biggest surprise for the very last: Harvey Pekar Meets The Thing with a script by Pekar and art by Ty Templeton. In what has to be one of the most unlikely team-ups in the history of comics, we find the late, legendary creator of American Splendor running into The Thing on the sidewalk. During their brief and casual conversation we discover that Ben Grimm and Pekar went to school together. It’s really amusing to see one of the mightiest members of the Marvel universe kvetching away to comics’ biggest curmudgeon about money issues, arthritis pain, and his wish to have a normal job like Pekar’s as a file clerk.

A man whose work has done as much to bring respect and recognition to comics as an art form  as any other creator in the history of the medium, Pekar is also paid tribute in a wonderful portrait by Templeton that closes out the issue.

Give some kudos to Marvel for letting some of independent publishing’s superstars have some fun (and take some risks) with their keynote, iconic characters, and be sure to look for the 144 page hardcover collected edition hitting the shelves in early April. With stories as unexpected as they are entertaining, Strange Tales II is a series that firmly belongs in the collection of any alternative comics nut or Marvel zombie. This mini-series (and its predecessor) have proven to be surprise hits. Now let’s just keep our hopes high for Strange Tales III!