2011 marks the 25th anniversary of San Francisco’s WonderCon and the convention’s growth, particularly within the last few years, has been remarkable to say the least. When I first began attending in the late 90’s the convention was held across the Bay in Oakland (then its home since its inception in 1987) and was still a moderately low-key affair. With its move to the Moscone Center in 2003, attendance has grown steadily with every passing year. Most astounding is the jump from last year’s head count of 34,000 to as many as 45,000 for 2011. 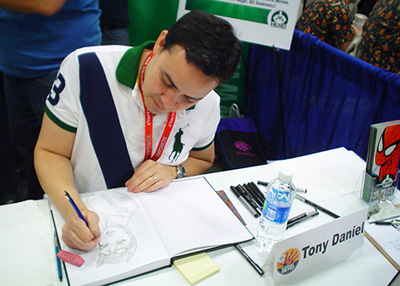 Most surprising is that despite its rapid growth in popularity the focus of the exhibition hall has remianed solidly on comics, those who create them, and the fans who love them. Hollywood, with its never ending compulsion to hijack attention away from any and all related media, was mostly relegated to WonderCon’s jam-packed programming rooms. Myself, I chose to spend my time conversing with the many comic book luminaries to be found in WonderCon’s expansive exhibition hall.

A welcome sight at conventions is The Hero Initiative table. The not-for-profit organization raises funds to help comic creators from the Golden and Silver Ages who are having trouble affording life’s basic necessities. Many of today’s best talents are eager to help out the writers and artists who initially inspired them to become comic creators themselves, and the Hero table is always bound to have someone great on hand.

Another very worthy cause at the Con was the S. Clay Wilson Special Needs Trust. In November 2008 the legendary San Francisco cartoonist (who I feel is the greatest artist of the entire  1960’s underground comics movement) suffered a traumatic brain injury. As a result, he is now unable to sustain a livable income off of creating art. Wilson’s wife Lorraine Chamberlain has set up the fund to help pay for both medical expenses and day-to-day necessities. The extent of Wilson’s influence, and the importance of his place in the history of comics could never be overstated, so please follow the link above and help out a creator who has done so much to give this medium the respect it now has as a valid and serious art-form.

Cosplayers are, of course, an expected part of almost any convention and many were in attendance once again at WonderCon. I was looking for the more unusual and unexpected characters, something a bit off from the prerequisite Jokers and Slave Leias. Not surprisingly, I found what I was looking for.

The most unexpected costumes on hand had to be Shoveler and Bowler from the movie Mystery Men. Though the Bob Burden comics are considered cult classics,  I’ve really never heard of the underwhelming 1999 film adaptation having any actual fans, at least none dedicated enough to put together such detailed and accurate costumes from it. At any rate, bonus points for sheer unpredictability.

I was not surprised that the Marvel area had, from what I could see, little-to-no comics on hand. Instead their booth was dedicated to the heavy promotion of the highly anticipated Thor and Captain America feature films, as well as their video game tie-ins. However, I can say that the Cap game looked pretty amazing and makes me wonder if it can buck the dismal track record of movie-inspired video games.

After-parties around town are always going to be a much looser affair than the convention itself, and in a city like San Francisco they can be especially wild.

Without a doubt the coolest spot to be at on Friday night was the Art Almighty show opening at the 111 Minna Gallery. This group exhibition featured work by many of the comics and pop surrealism superstars that San Francisco imprint Last Gasp has published over the last 40+ years. Many noted art world superstars were in attendance including Isabel Samaras, Winston Smith and Paul Mavrides, as well as Last Gasp founder Ron Turner. 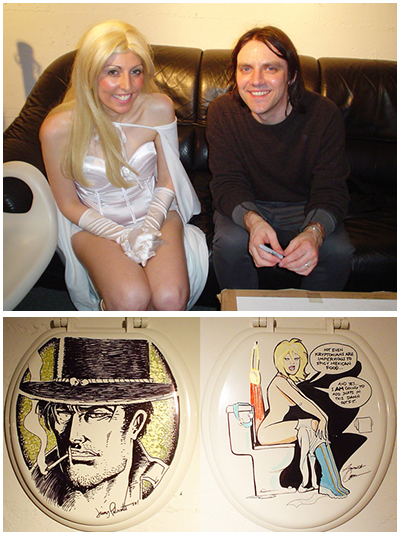 On Saturday night a party was thrown featuring Frank Quitely at the awesome comics shop Isotope located in SF’s Hayes Valley. The hooch flowed freely keeping the well lubricated crowd in high spirits while the very cool and friendly Quitely (who also provided the dynamic Batman image for the cover for the WonderCon program book) signed books and hung out with fans in the store’s upstairs lounge area. An especially neat feature of the shop is its walls of several dozen toilet seat covers decorated by visiting comic artists.

WonderCon’s Artist Alley had many of comics’ best and brightest in attendance including the supremely talented Geoff Darrow It was great to speak at length with 8 time Harvey and Eisner Award winning artist and colorist Steve Oliff. Oliff had many great stories about his time spent (5 years!) hand applying the color to copies of all 2,100+ pages of the Epic Comics english adaptation of Katsuhiro Otomo’s sci-fi manga masterpiece Akira. These original color guides are now being sold by Oliff, and at $30 a pop they were HANDS DOWN the best deal on art to be found at WonderCon.

Sharing a table with Oliff was comic and storyboard artist Paul Power. Power’s most recent effort is his self published collection of Alex Toth’s 1950’s comic strip The Adventures of Jon Fury In Japan. If you’re a fan of Toth you’ll definitely want this collection of little seen work. The comic also includes the last interview with Toth, held shortly before his death in 2006.

There were several sellers of original art at WonderCon, but if you’re looking for the absolute best in contemporary sequential art the booth to be at was Scott Eder’s. With original pieces available from artists like Robert Crumb, Gary Panter, The Hernandez Brothers, Jack Kirby, Tim Lane and Simon Bisley, you can count on Eder to always have the best of the best. Also, I urge all New York ComicImpact readers to check out the just opened Peter (Hate) Bagge art exhibit at Eder’s great Brooklyn-based gallery.

The very talented artist and inker Dan Parsons was present with his portfolio of beautifully inked pages from various Dark Horse Star Wars titles. In seeing his great work first hand, I was not surprised when he told me that his biggest influence was the legendary Al Williamson. When I inquired if comic artists were allowed to sell Star Wars pages, it was interesting to learn that all SW comic art has to go through Lucasfilm, which gets first dibs on any and all pages they want for their archives. Only after this process can the art then be sold to collectors and fans. 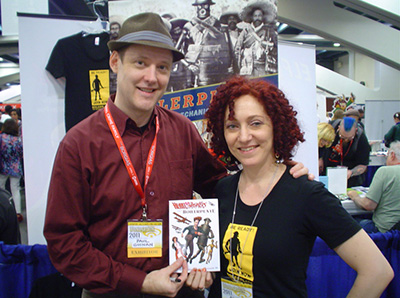 Husband and wife creative duo Paul Guinan & Anina Bennet were at the Con to promote their fantastic book Boilerplate: History’s Mechanical Marvel, which is slated to be a 2013 feature film produced by J.J. Abrams. Though the pair are well known as comic creators, Boilerplate is not a comic, but instead a lavish invented visual history book of the world’s first robot, the Victorian era’s Boilerplate. The book seamlessly weaves the fictional robot’s adventures with actual historical events and figures the likes of Teddy Roosevelt, Pancho Villa, and boxer Jack Johnson. The incredible level of detail found throughout this book in both text and imagery makes it the most bang for your buck on the stands and comes very highly recommended.

Brian Ewing, one of the very best rock poster artists of his generation, was at the Con with prints of his razor sharp, vividly colored and certifiably cool illustrations.

And, with a bit of sadness, so ended another year’s WonderCon. Still, with the convention’s popularity soaring, you can be sure it will return again next spring for another round of pop culture madness in the beautiful City by the Bay. I will certainly be back again, partly because WonderCon is a great convention and partly because I’ll take any reason there is to visit the unbeatable awesomeness that is the city of San Francisco!