As almost everyone reading this knows, Saturday, May 7, is Free Comic Book Day at participating shops across North America. With over 35 free titles vying for the attention of avid comic fans, I’d like to make a special note of the exemplary offering from publisher Archaia — Mouse Guard, The Dark Crystal, and Season of the Dapper Men, plus a sneak peek at the highly anticipated graphic novel A Tale of Sand all under the cover of one flip book. I was lucky enough to receive an advance copy of this release and my already high expectations in terms of art and storytelling were completely surpassed.

One side of this special one-shot comic features a new Mouse Guard story, subtitled The Tale of the Wise Weaver, by acclaimed creator David Petersen. Taking place in the year 1126, it tells the story of a mouse colony threatened on all borders by natural predators such as a serpent, a hawk and a crab. One brave mouse sets out to eradicate all of the towering creatures with his wits as the best weapon in his arsenal. As with all the Mouse Guard series, the wonderful naturalism of the art goes far in getting the reader to believe in the small, but fully fleshed out world of these creatures and the dangerous environment they live in. The result is the best fantasy comic since Jeff Smith’s beloved Bone. 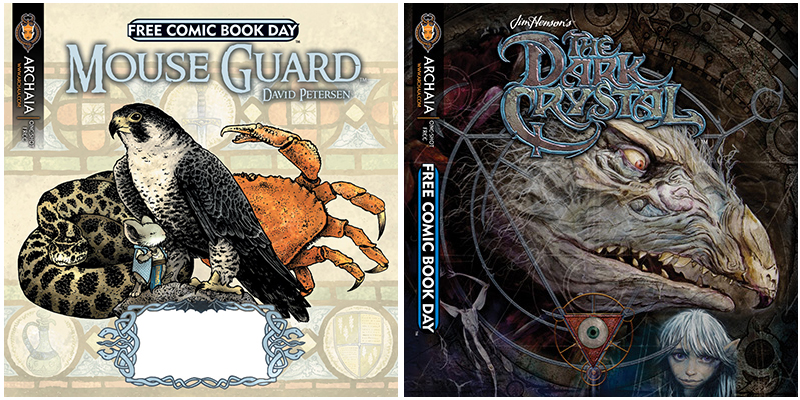 The other side of this flip book gives a taste of the two upcoming graphic novels inspired by the world of the classic Jim Henson film The Dark Crystal. Set 1,000 years before the events in the movie, the short story here follows the one-eyed seer Aughra. Through her we see the back story of the planet Thra, including the arrival of the Urskeks, the beings of light who would later be split into the good Mystics and the evil Skeksis. 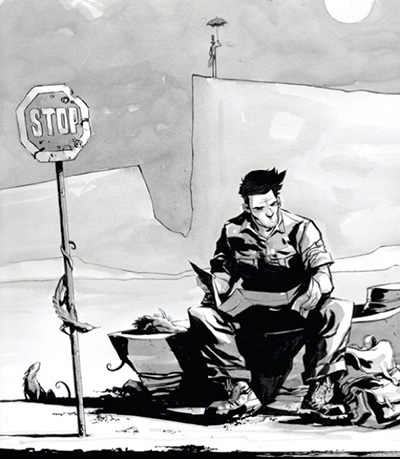 Tightly written by Brian Holguin with gorgeous, lush art by Alex Sheikman and Lizzy John, it is also the contribution of Brian Froud that will let fans of the film know that these books will be done right. Froud, a highly acclaimed fantasy artist, was the key creature designer on the 1982 film and here provides the plot, covers, character designs and art direction for the graphic novels.

The biggest surprise of the Archaia FCBD offering is the announcement of an upcoming 120-page graphic novel based on Jim Henson’s only unproduced screenplay. Titled A Tale of Sand (and co-written with Jerry Juhl) the story is described by Archaia Editor-in-Chief Stephen Christy as:

“…an existential journey of one man racing across a desert populated by weird, Henson-esque characters, trying desperately to outrun an unknown assailant who seems hot on his heels at every twist and turn of the story”.

With great art supplied by Rámon Pérez this will be a book to look forward to upon its release in September 2011, but a first look at this unprecedented project is only here in the FCBD comic.

When this year’s Free Comic Book Day arrives on May 7th, be sure to pick up the Archaia Mouse Guard/Dark Crystal one-shot. This level of art and storytelling printed on quality paper at a cost of zero dollars is an unprecedented thing in today’s world. Find out for yourself what fans already know: Archaia is now North America’s premiere publisher of pure fantasy comics.