There is very little else from the landscape of American popular culture that serves as a direct emotional bridge to my childhood like Charles Schulz’s eternally beloved comic strip Peanuts and the classic animated specials inspired by it.  As such, you can imagine my feeling as I turned onto West Steele Lane in picturesque Santa Rosa, California (an hour north of San Francisco) after a road trip of nearly 450 miles, to see the image of a contentedly skating Snoopy telling me I’ve arrived  at the amazing Charles M. Schulz Museum and Research Center. The Museum opened in 2002, two years after Schulz’s passing, and stands as a testament to the life’s work of the most beloved comic strip creator of all time. It might sound silly to some, but seeing the beagle’s familiar image at the entrance of the parking lot really felt like an old friend, not seen for a long time, was standing there welcoming me. 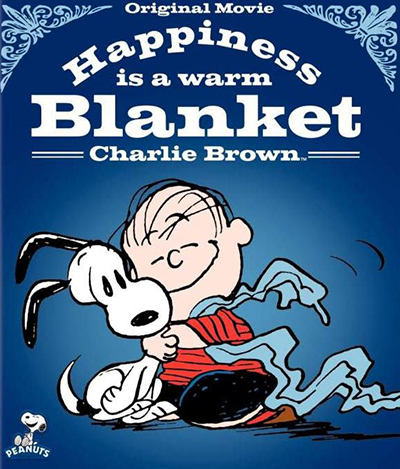 I was graciously invited to be part of a special recent charity event there during which the first Peanuts animated special in 5 years, Happiness is a Warm Blanket, Charlie Brown, was shown. Directed by Frank Molieri and Pixar veteran Andy Beall, from a script by Stephen Pastis and Craig Schulz (Charles’s son and the inspiration for “Pigpen”), Blanket is very likely the best Peanuts animated film of the last 30 years.

It is very clear that a tremendous amount of love and care went into this release by a group of people who fully understand what made Charles “Sparky” Schulz’s work so distinct, namely the intelligence, emotional truth and maturity found in all the early animated specials as well as (of course) the entirety of the 50 year run of the strip itself. Blanket warmly recalls the Peanuts films of our collective childhood by featuring traditional cel animation and softly painted backgrounds, expertly measured pacing, the use of actual children for the character’s voices and wonderfully melancholic jazz music (supplied here by Mark Mothersbaugh). And of course it’s fearlessness in dealing with some of life’s more difficult issues (security, loss, dependency) never prevents it from also being very, very funny.

Based on ideas from various Peanuts strips from the 50’s & 60’s, Blanket‘s story deals primarily with Lucy attempting to break her bother Linus of his attachment to his security blanket. This needs to happen before the arrival in a week’s time by their Grandmother who plans on confiscating the revered item because she feels Linus is too old for it. Click here for the trailer. A big surprise to me was that Blanket incorporates the first ever Peanuts strip (from October 2, 1950) into an almost painful to watch montage of Charlie Brown’s various rejections and failures.

Also premiering at the event was the graphic novel adaptation of the film published by BOOM! Studios new kids imprint kaboom!

This lively, consummately cute and colorful read (the first all new Peanuts release since Schulz’s passing) nicely captures the best qualities of the film. However, it has drawn unfair criticism from some Schulz purists who feel it’s sacrilege for the characters to be drawn by anyone but the master himself. In truth, Peanuts tales in a comic book format that have not been drawn by Schulz (but completed with his approval) date all the way back to Dell and Gold Key comics from the late 50’s and early 60’s. It is important to note that Schulz always meant the comic books to be separate from the canon of the strip itself. With multiple generations of kids (including today’s) growing up loving these iconic characters I see little wrong with new releases coming out now, as long as they’re well done, are in the truest spirit of the original strips and are produced with the hearts of those involved firmly in the right place. Plus, I find it hard to believe any long-time Peanuts fan could not be at least a little intrigued to see the 4-panel format of the strip played with to match the layout possibilities of the full comic page. 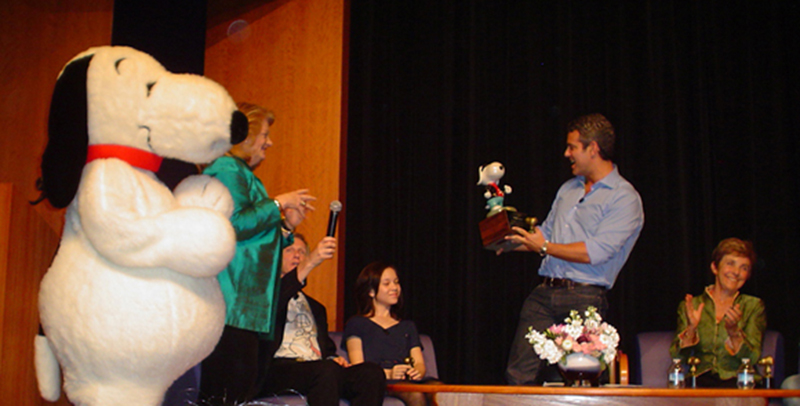 The screening was followed by a lively panel discussion featuring Beall, Charles’s wife Jean, Craig Schulz, executive producer Paige Braddock and the voice of “Lucy” Grace Rolek. Moderating the panel was special guest Andy Cohen, an executive and on-air host at the Bravo Network and a lifelong Peanuts fan.

As fun and entertaining as that evening’s event and screening was, the day belonged to the incredible, beautifully designed 27,000 sq. ft. Schulz museum itself, which I spent that entire afternoon exploring.

A handful of steps from the entrance, visitors are wowed by the Great Hall of the museum, the far end of which features a two-story mural of Charlie Brown’s determined, but eternally futile attempt to kick the football held by Lucy. The image is, astonishingly, actually a large scale mosaic comprised of nearly 3,600 individual Peanuts strips printed onto 2″x8″ ceramic tiles. This amazing feat of assemblage is the work of Japanese artist Yoshiteru Otani.

Otani also created a second, mind-blowing piece for the Great Hall: a huge 26 feet long, 9.5 foot high, 7,000 pound bas relief wooden sculpture. Titled Morphing Snoopy, it traces the evolution and multiple incarnations of one of the most recognizable and beloved characters in the history of comic strips.

There are thousands of original Peanuts strips in the Museum collection, and at any given time over 100 are on public display in two back-to-back galleries located just off of the Great Hall. In the Strip Rotation and Downstairs Temporary and Main Gallery one can find revolving exhibits which explore the themes of Peanuts as well as its importance to the history of the comic strip medium. It would be difficult to summarize in any brief way just how important and influential Schulz’s work was, but the following quote does perfectly expresses the overall artistic accomplishment of his signature creation.

“Think about of the content of Peanuts: frustration, loss and fear of loss, insecurity, aspiration of art and heroism, love/lust, sibling rivalry, arrogance, kindness, friendship, disgrace, rebellion, and the existential orneriness of everyday existence. Realize that these grand themes have been expressed with charm and unfailing humor in drawings as simple and evocative as a fine haiku everyday for almost 50 years. Then acknowledge Charles Schulz as one of the century’s greatest artists.” – Dennis O’Neil, Editor/Writer D.C. Comics

Particularly appropriate considering the brother/sister rivalry in the new Happiness is a Warm Blanket, Charlie Brown film is the current exhibit (on until June 19, 2011) The Browns and the Van Pelts: Siblings in Peanuts. Many great original strips are on display highlighting the rocky relationship between the temperate and measured Linus and his hot-headed, often flying-off-the-handle sister Lucy.

Peanuts fans will undoubtedly experience a steadily increasing feeling of warmth and happiness as they spend more time in and around the Museum. I think this can be attributed to the repeated recognition of familiar characters and/or things about which nothing but happy memories and thoughts are linked to. I can certainly state that everyone I saw at the Museum were not only enjoying themselves, but also seemed to be genuinely happy.

Beyond the doors of the Great Hall is a beautifully landscaped courtyard where one will find two great examples of the Peanuts on Parade (an ongoing series of 4-foot character statues which can be found in and around the Santa Rosa area), “Kiteus Eatemupus” (aka Charlie Brown’s leafy nemesis the kite eating tree), and a holographic birdbath. 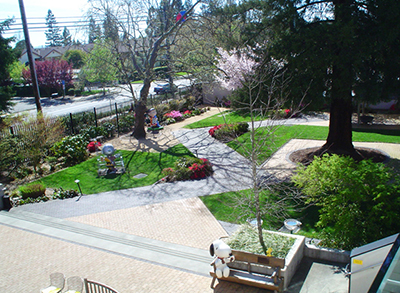 In the front of the Museum is the Snoopy Labyrinth. You can calm your thoughts and attain inner peace while walking through the head of the world’s most famous beagle! 450 steps will lead you in and out of the labyrinth. The large grey rock on the upper left is Snoopy’s nose while the bench at mid-left represents his collar.

The Museum also included two very personal looks into Schulz’s life —  a recreation of his private studio and library, including his well-used drawing board, and a nursery wall painted by Schulz for his infant daughter in 1951. The library’s collection of titles reveals a man whose hunger for knowledge was limitless and included books not only on humor and art, but history, theology and medicine.

All of the above great things to see and do are really just a sample of what is found at the Charles Schulz Museum and Research Center. The institution is dedicated to preserving, displaying and interpreting the art of its namesake and it does so in such a  beautiful and well-rounded way it seems like it could scarcely be improved upon. Add to this the educational workshops, community programs and art classes offered on-site and you begin to see how much the Museum enriches the community that Schulz called home for four decades.

Amazingly the Museum is but part of a larger Peanuts experience to be had as just steps away is the massive Snoopy’s Home Ice Redwood Empire Ice Arena. Schulz, a skating and ice hockey enthusiast, built the rink in 1969 as a place for the entire community to come together and have fun. Charlie Brown, in full skating gear, stands in front of the arena’s doors bearing Charles Schulz’s uniform number: 09. This is in honor of Detroit Red Wings hockey legend Gordie Howe.

Inside is the Warm Puppy Cafe, where Schulz ate lunch every weekday. His favorite table (by the front window) is always marked reserved in Schulz’s honor and is inlaid with photos of Sparky with some of his many loved ones and friends.

After a full day of exploring all of the great Schulz related sights, and an evening filled with the events surrounding the Happiness is a Warm Blanket, Charlie Brown film, I returned to my hotel room to ruminate on everything I had taken in. I wondered what is the shortest and simplest way to express why Peanuts, and all of its iconic characters, have meant so much to so many people over such a great length of time. I kept thinking back to the final question during the film’s panel, directed at moderator Andy Cohen. Asked why he loves the comic strip so much he answered: “Because Peanuts feels like home”. And sitting in a hotel room, 2,000 miles from where I grew up, I can tell you he is absolutely right.

I’d like to thank Gina Huntsinger of the Charles M. Schulz Museum and Research Center and Alex Uliantzeff and Mary Hong of The Lippin Group for making my experience at the Museum possible.