There are many books and comics that tempt the reader with the promise to go inside the mind of a murderer, but none in recent memory do so in such an alarming and realistic way as The Killer, a superb French comic series by Matz and Luc Jacamon.  This multiple Eisner Award nominated title, translated in three hardcover volumes to date from

Archaia, displays to the fullest possible extent the vicious ice-cold cool that nearly all modern day noir aspires to. 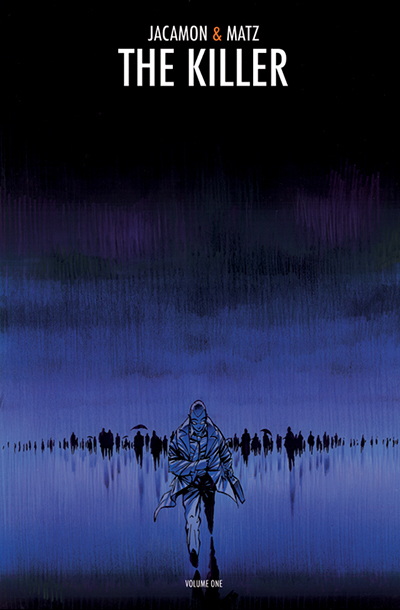 As the story opens our nameless main character, a highly paid Parisian hit man, lies in wait for his next hit. His near constantly running inner monologue reveals very early on the characters traits he shares with what is the clinical description of a psychopath. Key here is his complete lack of remorse for his homicidal actions. This stretches as far back as his first hit, when the nervousness he felt was either from it being a new experience or the fear of getting caught, not from having any qualms about extinguishing the life of another.

Also seen very early on is the first of our character’s many references to actual atrocities from different points in history. These extreme examples of humanity at its worst seem to serve as a justification for his actions, a reflection of a bleak view of the world where the willingness to do whatever it takes to stay alive and remain in charge, regardless of morality, is rewarded and the good suffer while the evil rise to the top.

As the days pass, and with no sign of his target surfacing, boredom and isolation begins to set in. As his thoughts spiral downward the comic panels themselves separate into slivers – an effective visual representation of a cold mind unraveling quickly.

Thankfully the killer’s breakdown is averted and moved past in keeping with the character’s true nature. Psychopaths are, in fact, not insane. Their calm, calculating, rational line of thought and ability to effectively lie to and manipulate others is what allows them to do (and often get away with) what they do.

After this initial story arc (which comprises the first half of Volume 1) the reader may believe they know what drives this character and what to expect from him. From this point forward those expectations are turned completely on their head, as we begin to see him as more than just a murderer for hire, but as a multidimensional character with complex relationships. This lone wolf has made room in his single minded existence for the beautiful woman who lives with him at his isolated Venezuelan beach house, as well as an actual friend: Mariano, the son of a Columbian drug lord whom the killer is obligated to teach in the ways of execution.

In a flashback he recalls hesitating in a sleeping hit’s bedroom. As he sat in the dark, he contemplated waking the victim so that he could say his goodbyes to life, as this is what the killer himself would want if the tables were turned. Though this cannot really be considered sympathy for his target, it does show his willingness to, at least for a moment, consider what it must be like to be the lowly prey. As earlier, Jacamon’s fractured panels reflect the conflict occurring in the killer’s mind.

Of all the insights into the killer’s personality, none is more telling than the passages in which he expresses his admiration for the crocodile. The analogies he draws between this brutal apex predator and himself is more telling of his true nature than anything else within The Killer‘s three volumes. Imagery of the huge reptile is seen at several points throughout the title, usually when our main character is reassuring himself of his place at the top of the food chain.

The most startling use of the croc analogy is nearly subliminal. At one point the killer’s lover is severely beaten while he is out of the country. When the three men responsible are handed over to our anti-hero, he viciously slashes them all to death in a rare moment of genuine bloodlust. When I first read this passage I thought the stylized splashes of red were representative of the killer’s state of mind. Only after some study of the page did I suddenly notice that the crimson lines form a crocodile, wholly appropriate for a moment of frenzy in which the “lizard brain” takes over. 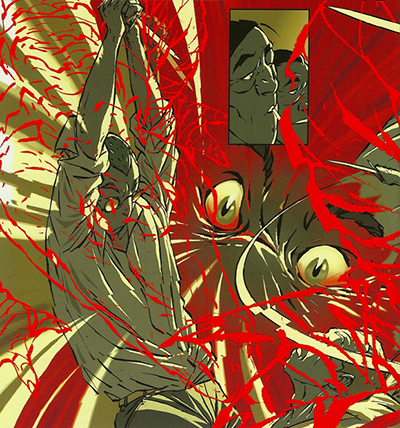 It’s interesting how commonly people compare The Killer to noir/neo-noir films as opposed to any of the many crime comics on the racks right now. This is due primarily to the sensational art of Luc Jacamon. “Cinematic” barely even begins to describe the highly dynamic perspectives and panel layouts utilized throughout. Through quiet moments as well as action sequences, the transitions from panel to panel flow so smoothly that it is natural to relate this comic to the film-going experience. Not surprisingly, the films name checked the most are also French: The Professional and Le Samurai. These are justified comparisons, but one should add a liberal splash of 1992’s extremely nihilistic Man Bites Dog to mix The Killer‘s European cinema equivalent cocktail.

Jacamon is also highly skilled at creating vivid and highly realistic backgrounds. Whether the globe-trotting killer finds himself in a sprawling nightclub, an ornate restaurant or an idyllic lake, the detail heavy and beautifully colored settings serve to make his world all the more believable.

The grand architect of what makes The Killer a high water mark of crime comics is its writer Matz. In a story where betrayal, double crosses, uneasy alliances and disposable lives are commonplace, the possibility grows of having threads of story left undone or less than resolved in favor of the next bloody set piece. Not so in The Killer. All consequences, both positive and negative, are given the time needed to play out in a satisfying, brilliantly paced way for the reader. The hit seen at the beginning of the series sets into motion a string of events which continue through the next several story arcs.

Just as amazing is the way in which Matz plays with time throughout The Killer. Shifts forward and backward in storylines are finely constructed and give his already tense stories more punch than if they were told in a more traditional, linear fashion. Indeed, the jumps in time become so rapid and effortlessly used as certain sequences progress that The Killer would make even Quentin Tarantino’s head spin.

We are in a time in which the tropes of noir, once the territory of film buffs and pulp novel enthusiasts, have now long become mainstream and overly familiar. The popularity of this bleak brand of entertainment has naturally extended to the comics world as well resulting in an unusually high number of like minded titles available, but if you want the absolute best of the bunch look no further then The Killer. It’s as explosive as a bullet to the back of the head.