War, murder, corpse dismemberment, drug abuse, human immolation and religious fanaticism are, quite understandably, things not normally attributed to the beloved Carlo Collodi fairy tale Pinocchio.  However, the traditional telling of the wooden boy who wishes to be a real flesh-and-blood child is far from what you’ll find in the astonishing 192 page oversized hardcover Pinocchio by Winshluss, translated from the original French edition and available now from Last Gasp.

Winshluss is the pen name of acclaimed cartoonist Vincent Parronnaud, a talent known outside of Europe primarily as the co-director and co-writer of the Academy Award-nominated animated film Persepolis. North American sequential art fans now have the opportunity to see his astounding book Pinocchio for themselves and understand why it won the coveted Fauve D’Or (the highest award) at the 2009 Angouleme International Comics Festival.

Told almost entirely without words, the story opens with a modern day inventor constructing a metal child for the sole purpose of selling him to the army as a brutal weapon of war. As the man gives his pitch to an army general, his wife makes the deadly mistake of using Pinocchio’s incendiary nose for sex. This leads to the puppet leaving home, setting into motion a series of increasingly bizarre and cataclysmic adventures with seemingly no relief in sight for anyone involved. 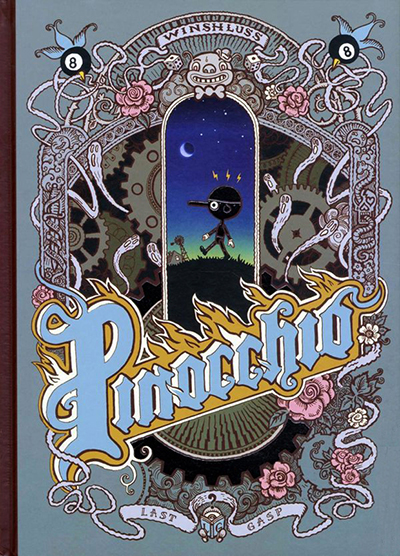 Using the original story (and the 1940 Disney classic) as a basic template, we see familiar characters recast as dark reflections of their original incarnations. The cat and fox who led Pinocchio to Stromboli are now two homeless men – one a junkie, the other a long-suffering blind man. A particularly potent remaining is reserved for the Coachman, who in the original story turned children into donkeys with the intention of selling them into slavery. Here, he is a psychotic clown-faced military leader who turns little boys into bloodthirsty and unrelenting dogs of war.

A particularly potent re-imagining is reserved for the Coachman, who in the original story turned children into donkeys with the intention of selling them into slavery. Here, he is a psychotic clown-faced military leader who turns little boys into bloodthirsty and unrelenting dogs of war.

As undeniably grim as the material is, there is a strong undercurrent of pitch black humor running throughout the whole affair. This is delivered partly from the pure cartoony-grotesque giddiness and exuberance that threatens to leap off of every page. However, the more straightforward guffaws are served up via the trials and tribulations of Jiminy Cockroach, a squatter who lives in Pinocchio’s head. Jiminy is far from the “wish-upon-a-star,” voice of conscience cricket we’ve seen in the Disney film. Here he is an unemployed pest, a wanna-be writer with little drive and even less follow through when it comes to fulfilling his lofty literary dreams. Additionally, his fiddling around with Pinocchio’s wiring inadvertently provokes more than one of the mechanical marionette’s violent flare-ups.

Jiminy’s passages contain the majority of the actual dialog in Winshluss’s mostly silent narrative. The almost complete lack of common comic book devices such as word balloons and sound effects only serve to heighten the overall reading experience. The gorgeous art here (vividly colored by Cizo) is perfectly composed and teeming with the vernacular that is the unspoken language of comics. One could teach an entire class on cartooning theory based on Winshluss’s achievement here. This visually complex story is effortlessly told, so much so that one may not immediately realize what a masterpiece of economy this chunky book really is. There is not one superfluous panel in all of the 190+ pages seen here. Every image serves to move the story forward and nothing is there simply to provide a simple “wow” factor or the dreaded “weird for the sake of weird” label. Even so, Pinocchio is certainly filled with beautiful, show-stopping imagery, including fully painted splash pages that are peppered throughout the book.

One integral character absent here is the Blue Fairy. In this version, Pinocchio isn’t aware of being good or bad and at times seems to barely draw distinctions between the living and the dead. He has no want of becoming a real boy because he fails to understand what that even means. He simply and blankly responds to the world around him either at the prompting of others or via mechanical short circuiting.  One of the main themes of Collodi’s tale is that a transformative reward awaits those who have demonstrated goodness. If the reward for righteousness is given by the Blue Fairy, her services are not needed here.

The anarchic flavor and graphic complexity of Pinocchio may remind some of the groundbreaking work seen in the late, lamented RAW magazine. Indeed, this fractured fairy tale seems as if it is a long-lost entry meant for that publication which has been plucked from obscurity and expanded to feature length. Adventurous readers looking for a completely unique, singular comic experience need look no further than this new classic of European sequential art. There was a time, before the rise of Disney, when much more mature scenarios were commonplace within the world of fairy tales. With Pinocchio, Winshluss pushes the comic medium forward while dragging a certain marionette back into the darkness.