Any serious discussion of the best war comics of all time is sure to include the legendary Harvey Kurtzman-edited E.C. titles Frontline Combat and Two-Fisted Tales. The stories found in these anthologies focused on the brutal realities of war instead of flag-waving glamorization and would even view conflicts from the enemies’ point of view, putting a relatable face on the nameless soldiers on the other side of the field. 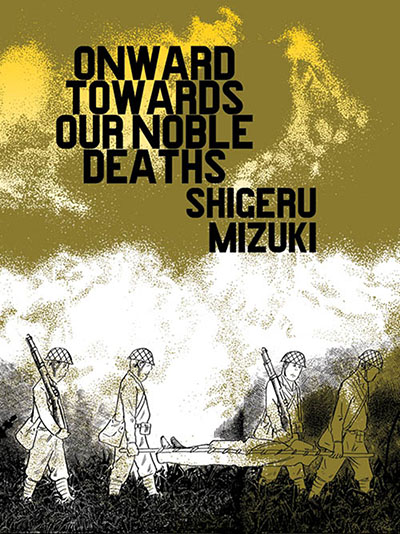 The now 89 year old Mizuki is a towering figure in the world of Japanese cartooning, a 60+ year veteran of the art form whose influence and popularity is easily the equal of talents (more well known of this side of the globe) such as Osamu Tezuka and Keiji Nakazawa. A soldier in the Japanese Imperial Army who would lose an arm during an air raid, Mizuki created Onward in 1973 as a recounting of his own grueling wartime experiences and is, by the artist’s own admission, “90 percent fact”. As the book opens we are introduced to a platoon of Japanese soldiers on their way to the island of New Britain in 1943, an area which is now known as a part of Papua New Guinea. (Note: Onwards is presented in the traditional Japanese format, read back to front, right to left.)

Even before a single bomb drops or bullet fires, the lives of the enlisted men is one of great hardship, largely due to the continual physical abuse from their commanding officers. Early in the book a Corporal exclaims that “new recruits are like tatami mats: the more you beat them, the better they are”. It becomes clear that this is a part of a larger Imperial Army cold ethos wherein lowly soldiers are lesser creatures than higher animals like horses, and returning from battle alive is an act akin to cowardice and near treason. Adding to their misery is near continuous hunger, natural predators, tropical fever and the uneasy certainty of the upcoming conflict and the death with which it is guaranteed to bring.

The inevitable, dreaded day soon arrives when massive American forces land upon the island. The young, inexperienced Major in charge of the already exhausted (and hopelessly outnumbered) men decides they are to lead a suicide attack on the enemy, rationalizing that in the face of an unbeatable enemy it is better to die honorably in battle than retreat to the relative safety of the mountains. The stunned platoon has little time for the insanity of the decision to even register before finding themselves ordered headlong into battle.

One thing the reader immediately notices of the art in Onwards is the extreme juxtaposition between the very cartoonish physical representation of the human characters and the obsessively detailed and stunningly realistic (and sometimes photo referenced) South Pacific backgrounds and military hardware.

Mizuki has worked in many different genres of manga and this kind of head-spinning visual whiplash is a signature style of his across various titles. Speaking for myself as a reader, the exaggerated designs of the soldiers made their deaths reverberate with an even greater impact. Seeing these characters, that look more styled for comedy, being shredded by mortar fire, seemed to carry more weight than as if they were drawn with total anatomical accuracy.

Still, there is a very specific emotional card the creator is holding regarding his visual choices in Onward, and he plays it in the books final passages. It is here that any cartoony leanings evaporate into a series of silent images of the horrific aftermath of the battlefield. These precise, razor-sharp illustrations provide an appropriately sobering coda to this story of ordinary men from normal lives thrust into a nightmarish situation and then expected to ruthlessly kill for a military that seems to not care at all if they live or die.

Onward Towards Our Noble Deaths is the first work by Shigeru Mizuki to be translated in English and becomes an instant addition to the canon of all time best war comics for us here in the West. All great anti-war tales, across any number of mediums, are ranked as such by their willingness to show that the futility of war is not calculated in the numbers of the dead, but by the needless levels of human suffering that takes place in order to reach such a devastating toll.