Happy “Horror on the 13th” everyone! I’m here, and I’m so ready to blow your minds with amazing horror comics that you need to be reading. I love the horror genre (as you well know by now), but let me explain a major reason that I have taken to these books and movies so easily – the women. This may seem strange coming from a woman, because horror takes a lot of criticism over their use of females in movies, television, and comic books. This might get me in trouble, but I disagree with a lot of what is said by these critics. Yes, there are people who abuse horror, but I believe we now call those “torture porn” and disassociate them with good old classic horror. Wow. I used that word a lot. Anyway, my point is that women get slapped around, stabbed, and objectified in these movies and comics, but they can also be empowered. Horror movies create roles for women that are lacking in other departments. Some amazing actresses started out in horror! It’s underestimated and underused to lift women up. Horror comics? Forget about it! That’s where we find some of the strongest women ever written. This month’s column is dedicated to them.

I have been super excited lately for these Deadlands one shots that are being put out by Image Comics. They are so good! This latest one, “Massacre at Red Wing,” has a very awesome female character. In fact, I would LOVE to turn this into a B movie. It would be amazing. Co-written by Jimmy Palmiotti and Justin Gray, this is the story of a woman taking vengeance on the wasteland she’s been subjected to since her mother was taken from her. She has herself a nice wolf companion that may or may not be some sort of Native American spirit. I love the story because of the slaughter and the motivation. Revenge stories always wind up being so rich. I wish that it wasn’t just a one shot book. I really want to know what happens next. What happens after the massacre? Does her mother deserve a second chance? What is up with that wolf? I’ll never know, but a girl can hope. 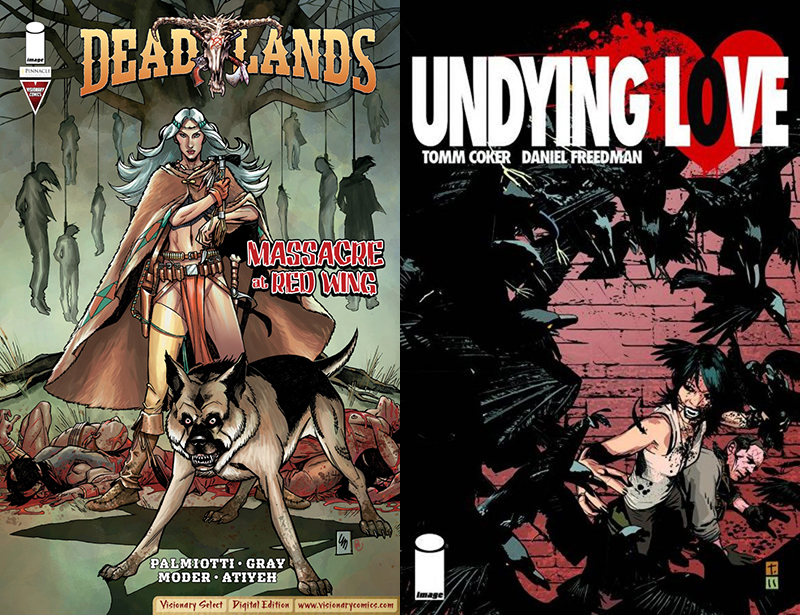 My next super awesome woman is none other than Mei from the Image book, Undying Love. Talk about a woman who drives a story! John is an amazing protagonist and all, but Mei is the heart of this piece.She is a vampire, yes, but the richness of her character comes from the way she handles her condition. She constantly fights her lust for blood, even when it hurts her. Mei is willing to make the hard sacrifice to keep darkness and evil away from her and the man she loves. I, for one, think Mei is one of the best written horror characters out there – male or female. She knows the level of danger and toxicity she brings to her romance, but she powers through to achieve a greater goal. Mei knows she has the will and the strength (both inner and outer) to get her and her love through this ordeal.I adore Mei. Kudos goes out to Tomm Coker and Daniel Freedman for creating such a woman that can stand on her own, vampire or not (I really believe that), because it’s a sense of a greater cause that drives her to fight against the condition holding her down. 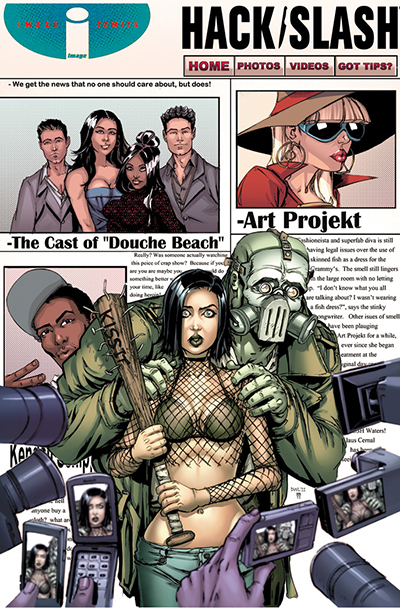 Finally, I had the honor of stepping into the shoes of this amazing comic book heroine, Cassie Hack! I feel like maybe I talk about her too much, but I just don’t care. I find her to be an empowering female character in the horror genre. She is the perfect example of everything I am talking about. She not only adapts to the crazy world she has found herself in, she also betters herself in this world. Yes, she does it in skimpy clothes. However, I think focusing on her outfit diminishes the fact that she is a fighter and a survivor. Creator, Tim Seeley has done an excellent job with Hack/Slash in the sense that he is able to walk the line with Cassie. She has her sidekick, Vlad, who might be bigger than she is, but she can do anything he can do. That’s what I love about Cassie! She plays with the boys and monsters – only she does it better than they do. Try and argue with me that Cassie is not a strong woman. Just try! She fights out of any situation with the resources and tools she is given. The only way I can speak more highly of this book is if I dressed up like Cassie Hack – oh wait! I did that.

Take the rest of the month to catch up on the strong females in horror, and this time appreciate the women for their power and their beauty. In a lot of ways we hold this genre together.We provide the contrast between the bimbo girls who wind up as victims and the strong leads that make it through by their boldness and wit. Should you feel the need to seek out new movies to supplement your comics, I have a few suggestions in that department as well. In fact, my friends like to make them. Take a moment to check out the Kick Starter account for the up and coming The Cheerleaders Must Die (http://kck.st/qZtHxk). I always support independent horror and you all should, too! This one even has the strong women I’ve been talking about in this article. Until next month, I wish you happy scarings and hot chicks with knives and bats.