Tales of dystopian societies and their corrupted and controlled cityscapes have a long and rich history across multiple areas of media, tracing back at least to the time of H.G. Wells. Still, it is within the last few decades that the frequency of these stories, in print and film, have increased exponentially.

On a daily basis we see a continued mistrust in governments and their leaders, spiritual malaise, heightened sensationalism in entertainment, far-too-rapidly advancing technology, and an ever widening gap between the rich and the poor on a worldwide level. It’s little wonder that writers choose to filter these realities of modern life through speculative/science fiction set in a “near future” that shows us where were headed if we don’t wise up, and soon. Comics, naturally, are a great platform for such tales, and a recent example of this comes courtesy of the French writer/artist duo Matz and Luc Jacaman and their series Cyclops, the first two chapters of which are available in a slick 122-page hardcover from publisher Archaia. 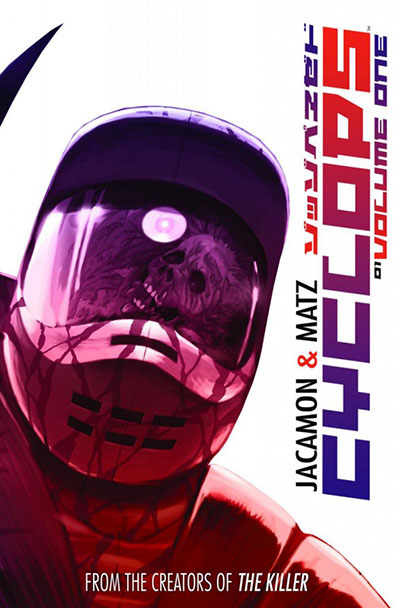 Set in the year 2054, Cyclops depicts a future in which the armies of the weakening world powers have been marginalized by the rise of private security firms. These beyond wealthy corporations have vast resources of heavy weaponry and elite “soldiers” (i.e. mercenaries) which are being dispatched to extinguish conflicts around the globe, all with the blessing of the United Nations itself.

A huge revenue stream for one such firm, Multicorps Security Inc., is in the packaging of brutal war as easily digestible entertainment for the masses — reality television pushed to its unfortunate and inevitable extreme. What better way to unwind after a tough day at the office than with a cold beer while watching the greatly outgunned rebels of a conflict halfway around the world being blasted into oblivion.

Enter our main character Douglas Pistoia. Though he excelled greatly in his studies, and had the brightest of futures before him upon graduation, Doug finds himself unable to find steady work to support himself and his loving wife. A job interview with Multicorps makes his leadership potential clear and he soon finds himself quickly moving through military training in anticipation of an upcoming deployment.

It is here where we have an introduction to the sensationally high-tech battle armor the troops wear, which includes a single remote controlled camera built into each helmet (hence the suits’ nickname “Cyclops”).

An act of heroism on his first mission, broadcast to millions of viewers across the world, makes Doug an instant media sensation as well as an invaluable asset to his employers. The fact that the officer he thought he was saving was already dead is an instantly downplayed footnote.

Doug’s new high profile in the public’s eye brings with it the title of Lieutenant, a huge raise in salary and his own reality show. Still, the cost of success is paid in terms of shaken morality as Doug and his troops are still obligated to their employers to carry out vicious massacres unseen by the eyes of the public.

Dystopian stories often succeed best at being either a satire and/or condemnation of the current state of the world, and in a post-Robocop and V For Vendetta sci-fi landscape this is not the easiest thing to pull off. Still, Matz (who himself sites Starship Troopers and Blade Runner as influences here) has some big statements to make, and he makes them in an incredibly economic fashion that does not interrupt the flow of the story or the development of Doug as our increasingly flawed hero.

An example of this comes early in the book as a reporter relishes in expounding upon our ability to obliterate the enemy. He then closes by stating that all the (ratings boosting) carnage comes with the hope that the conflict will soon come to a close. Meanwhile, the audience at home certainly knows what they want from their entertainment as a young boy excitedly comments on what he’s just seen

This is not the last time in Cyclops that we’ll see those who supply us with our reality-based entertainment played as they truly are: the exploiters and profiteers of other peoples’ misfortune. Of course the flip side of this is that they’re simply giving a desensitized and increasingly amoral audience exactly what they’re asking for.

Another interesting moment occurs during the briefing the troops undergo before their first mission. A grunt asks if they’re mercenaries (which they clearly are). Their Commanding Officer dismisses the negative characterization of “mercs” and continues on with a blanket statement about the men being the “good guys”, and that what they’re doing will be for the greater good of everyone. This kind of jingoistic logic has been used to justify countless military campaigns the world over, and more frequently in recent times. If might makes right, why stop when you’ve got a good thing going?

Also interesting (and very true to life) is the nervousness of the Multicorps executives over the potential swearing the soldiers may do during the live broadcast, especially in regards to Anderson, a seasoned soldier assigned to keep an eye on Doug. It’s the censors’ logic which no rational person can understand: extreme violence is acceptable while swearing is not.

Of course a strong story is only half the requirement for the success of a comic like Cyclops. The near future being presented must be distinctly unlike today’s world, but not so far from it that we feel as if we are just on another doomed metropolis of a planet altogether. Luckily, Luc Jacamon is not just an amazing comic artist, but a sensational designer as well, showing us a future that is alternately gleaming and well-worn, with enough jaw-droppingly cool tech to satisfy any fan of earth set sci-fi futurism.

Matz and Jacamon are also the creators of the acclaimed crime comic The Killer and it was interesting to see their departure from the insular character study of the former title to the bright facade of the world of tomorrow (for an expansive look at The Killer see my Sequential Sunday article here). As a big admirer of their earlier title, I held high expectations on what the duo would do in the sci-fi genre and Cyclops does not disappoint. In all honesty my only real complaint about Cyclops has little to do with the comic itself, and more to do with our world now: with society’s current slide into apathy and our indifference to our fellow human beings, there is no way it’ll take until 2056 to reach the points seen in Cyclops. Some days it seems like we’re nearly there already.