Welcome to The Impact.I’m Matt and I’m here to bring you all the latest comic news. 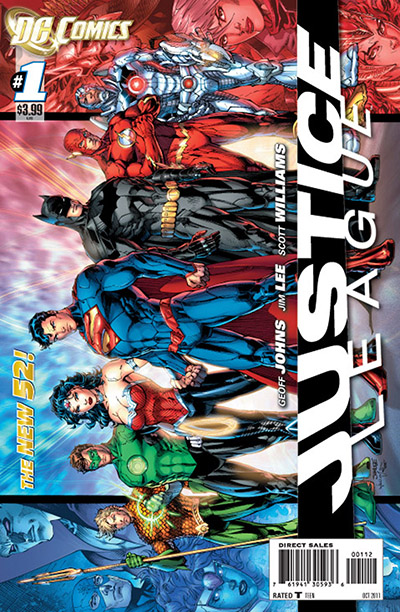 As the media onslaught of “New 52″ coverage continues. DC’s blog, The Source confirms that Justice League #1 has sold out. They were also kind enough to share with us the cover to the second printing, which I actually like more than the cover they used for the first printing. Check it out.

This week artists Scott Morse and Skottie Young debuted a new web comic on their blog skottiescott.com. Scheduled to publish a new page twice a week the as-of-yet-untitled web comic focus on Asher and Spittle and their crazy adventures.

Dynamite Knows What Evil Lurks in the hearts of men.

Dynamite Entertainment announced that they have signed a comprehensive licensing agreement with Conde Nast to publish comics featuring the pulp icon The Shadow. No creative team has been announced. However, in the press release they have said  Alex Ross, John Cassaday, Jae Lee, and Ryan Sook will be involved, most likely as cover artists. I can tell you one writer who wants the job and has worked with Dynamite before, Matt Wagner. Wagner has said in the past that the Shadow would be his dream project,  and I agree that a more ideal writer would be hard to find.

The Shadow originally debuted in 1930 as the radio narrator for  Street and Smith radio program Detective Story Hour. After his popularity increased the Shadow made his print debut in April 1931 in The Shadow Magazine under the watchful eye of Walter B. Gibson. I’m a huge pulp fan and really hope Dynamite brings their A team talent to the book. I would love it if they were to do an anthology series like IDW did with The Rocketeer Adventures.

Marvel Teases The Fearless
Courtesy of Newsarama. Marvel released this teaser promoting Fear Itself: The Fearless.Fear Itself status quo. Fear Itself: The Fearless hits comic shops this October. Originally announced at Comic Con this twelve issue maxi-series will be written by Matt Fraction, Cullen Bunn, and Chris Yost. Mark Bagley and Paul Pelletier will be providing the art. The series aims to explore the post 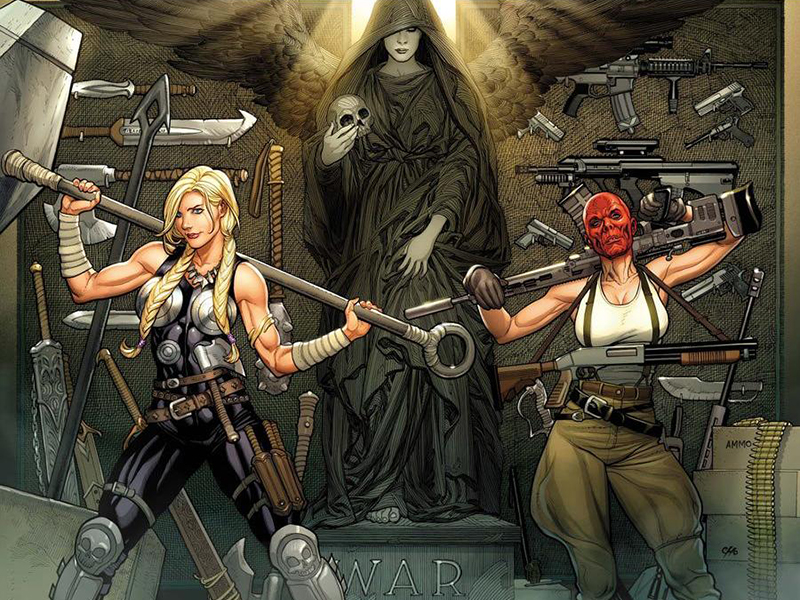 With the current pace of Fear Itself , the additional “Point One” issues and now this, the idea of another fifteen issues is kind of hard to get excited about this. Fear Itself really needs to pick up the pace. What do you guys think? 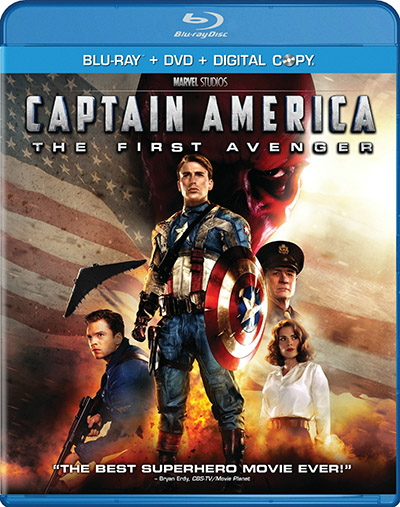 Blu-Ray.com announced this week that Captain America: The First Avenger will be coming to Blu Ray and DVD  on October 25th. Some of the special features will include.

Courtesy of a Russian site, SpiderMedia.ru we get our first look at three new pieces of Avengers Promotional Art. These are most likely the art we will see on the merchandise like coloring books, lunch boxes, etc. but it’s still pretty cool to see the team.

Today AMC announced that they will be splitting the second season of The Walking Dead. The show will premiere it’s second season on Sunday October 16th with a special 90-minute premiere. Initially airing seven episodes, the show will return on February 12th to air the final six episodes of season two. Additionally when the show returns AMC plans to premiere a new unscripted series from Kevin Smith. Secret Stash which focuses on life in a local comic shop.

Courtesy of Bleeding Cool. Check out this awesome promotional art for the Road To The Avengers. The collection, which will include; I Am Iron Man, Iron Man Security Measures, Iron Man 2: Public Identity, Iron Man 2: Agents Of SHIELD and Captain America: First Vengeance, are all in movie continuity miniseries.  Granted this art is a great start, but I keep hoping Marvel will soon release a promotional group photo. If for no other reason than me losing my geek mind. This is just so incredibly exciting to know that next May we are going to be watching a live action Avengers movie, directed by Joss Whedon. Sigh…This is a very fun time to be a fan of comic based films.

Latest Pictures of Henry Cavill from Man of Steel.

Courtesy of the non-official Man of Steel Facebook page and Comic Book Movies. In a huge non-controversy, set photos from Zack Snyder’s Man of Steel show the first full frontal view of  Henry Cavill in the Superman costume. As you can clearly see, the red over-shorts are gone. This costume looks like a compromise between the classic and the “New 52” Superman costumes.Definitely more alien. I actually don’t mind it, and kinda dig it. The costume maintains all the iconography I need in the Superman costume. I really love the longer cape. So what do you think??? Man of Steel hits theaters June 14, 2013

Courtesy of iFanboy and Bleeding Cool.  The JSA is back!!! Rich Johnston originally  got wind of this at the beginning of the month, but at Toronto’s FanExpo it was confirmed when DC announced a new Justice Society of America title. The book will be written by James Robinson with art by Nicola Scott, which is a fantastic creative team if I’ve ever seen one.

Where it gets really interesting is the fact that Justice Society of America will take place on Earth-2. That’s right folks, the multiverse is alive and well. Robinson said placing the book on Earth-2 gives him the chance  to use characters that were  dead or unavailable.

I think this was a smart move by DC. I know a lot of fans who were very sad to see the Justice Society retconned out of the New 52. I am hoping that since it takes place on Earth-2 the book will have more of a period piece feel to it. The inclusion of Earth-2 and the multiverse opens DC up to tell any and every type of story possible. Which I find very exciting. 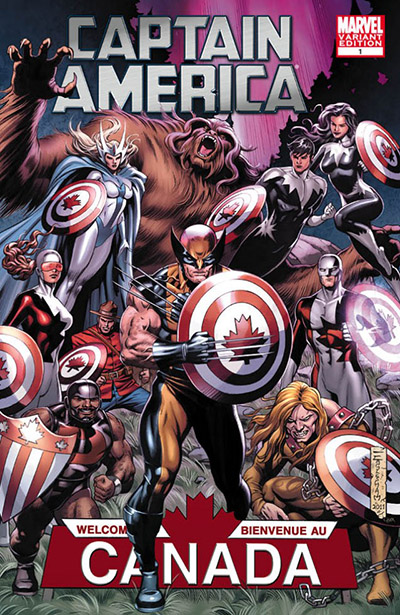 During Marvel’s panels at  the Toronto Fan Expo, several announcements were made, first and foremost, that writer Brian Wood is going to be writing for Marvel some time in 2012. Wood has been exclusive at DC Comics since 2006. No details were provided but based on the teaser image one can surmise the project will have something to do with Wolverine.

I have absolutely loved Wood’s work on DMZ, which I have been reading in trades, and while sad to see it end I’m excited to see what happens to Matty Roth. This is actually a return to Marvel for Wood who had co-written Generation X with Warren Ellis back in 2000.

We also learned that Greg Pak, Fred Van Lente and artist Dale Eaglesham’s Alpha Flight maxi-series is now an ongoing series.  A well timed announcement considering they were in Canada.

Marvel also shed some light on the “Destroy” Teaser they released earlier in the week.Coming in September, Destroyers is a new book from Fred Van Lente and Kyle Hotz. Featuring The Thing, She-Hulk, Karkas, A-Bomb, The Beast, and Devil Dinosaur. When talking about the book Van Lente said “We find out what really killed the dinosaurs, and they’re coming back for us.” With this week being what would have been Jack ” The King” Kirby’s 94th Birthday I’m very happy to see Devil Dinosaur getting some love.

Route 666 will launch in February.Written by Roberto Aguirre-Sacasa and artist Peter Nguyen. It’s set in the 1950’s and follows two deputies as they investigate crimes and mysteries that with a supernatural flair.

From what I have been reading its sounds like Fan Expo was a lot of fun. Marvel has had a very busy month of announcements and teasers and it doesn’t look like they are slowing down anytime soon. This is a very exciting time for comics, things have not slowed down one bit since San Diego Comic Con and I couldn’t be happier. Be sure to check in next week for all-new installment of The Impact.