Sequential Sunday: Escape To The Indies With Archaia II

Welcome back to this continuing look at highly noteworthy releases from Archaia, a company whose dedication to compelling storytelling, beautiful artwork, and top-tier book design has earned them a reputation as one of the best independent comics publishers in the industry. Though Archaia releases cover a wide spectrum of genres, they are best known for their fantasy titles, largely due to the success of their flagship series, David Petersen’s Mouse Guard.

We’ll have a look at the most recent Mouse Guard mini-series, The Black Axe, later in this article. First I’d like to spotlight some Archaia books that are a result of a partnership with a media company whose namesake carries so much significance to multiple generations of children that “iconic” barely even begins to describe it – the Jim Henson Company. 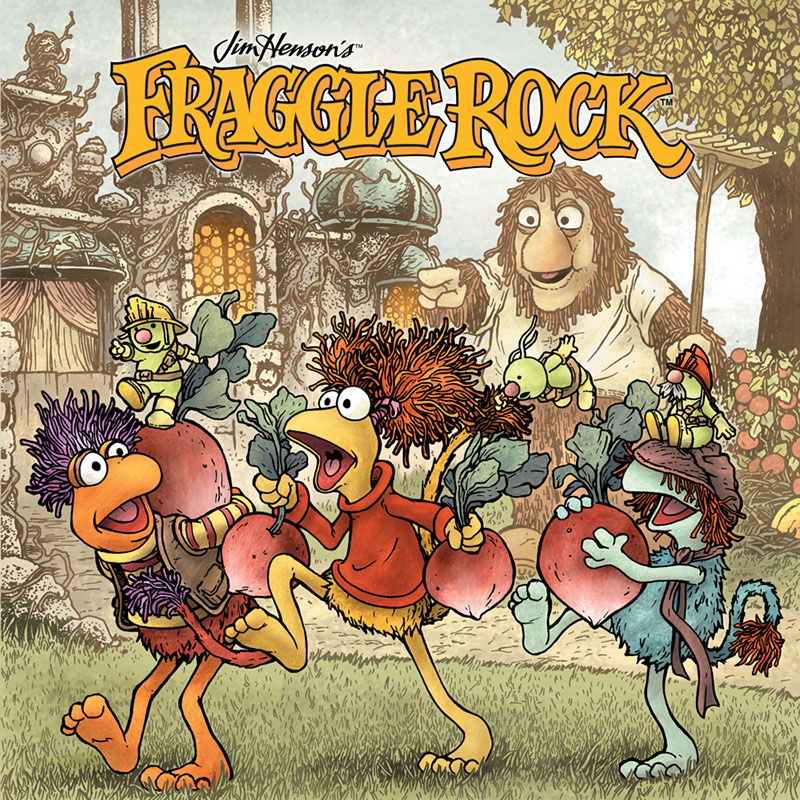 If you spent any of your childhood during the 1980’s, the odds are good that the puppeted creations from the mind of Jim Henson were amongst your favorites. With the increased interest and growing nostalgia for all things 80’s (even by those likely too young to remember it), there is no better time for a comic reviving one of Henson’s most fondly remembered creations: Fraggle Rock.

Continuing the adventures of the colorful, fuzzy-haired, carefree subterranean creatures known as Fraggles, these comics perfectly capture the imagination-rich visuals and deceptively simple storylines found within the original t.v. series that aired from 1983-87.

Much like the show, the comics present the tales in a manner that a child any age can understand, but still teach complex life lessons (such as the rewarding nature of giving and the importance of self-expression) in a very clear, smart, and pointed way. These are the kind of comics that get rarer every year: ones that speak to the child in us adults as much as they do to children themselves.

It’s also great to see subtle counter-culture nods appear in the issues, references to an idealistic youth movement whose often sunny optimism was both like a reflection of, and an addition to, the positive nature of nearly all Henson projects. Created by a wide array of writers and artists, whose affection for the material is very clear, the collected Archaia Fraggle Rock comics are available in two beautifully produced hardcovers which maintain the series’ unique 8 x 8 format.
While speaking of the above books, it is well worth mentioning The Skrumps, which are a group of bizarre above ground dwellers who are relative newcomers to the Henson universe. They have been seen in a back-up story in the first Fraggle Rock collection and now have their own one-shot, subtitled The Mooch Steps Up His Game.

Written, drawn, and colored by Skrumps creator John Chandler, we are treated to the tale of the severely slacking (but well meaning) Mooch as he goes about his day in search of a free meal and good times. Mooch isn’t exactly the most liked guy in town, but he tries to not let that harsh his sunny mood. 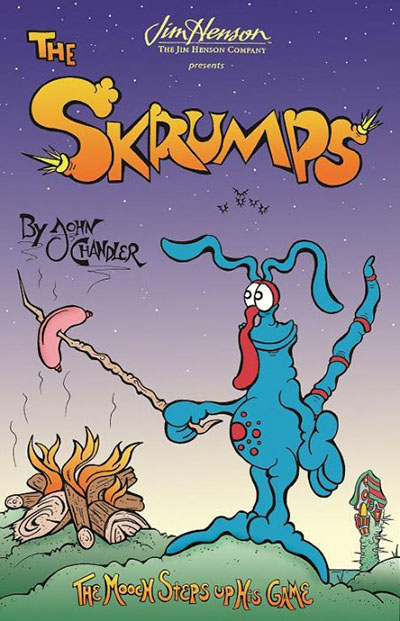 There is a lot to like in The Skrumps, not the least of which is the whimsical Muppets meets Seuss surreal artwork all contained within warped and misshapen panels. The Skrumps is some seriously fun, family friendly freakiness, and I hope we get to see more in the future.

Even with all the above, this is just the beginning of Archaia’s creative relationship with the Jim Henson Company. Before years’ end we will see the release of no less than three additional eagerly anticipated Henson related graphic novels: The Storyteller Vol. 1, A Tale of Sand, and The Dark Crystal: Creation Myths Vol. 1. There will be more to come on these books as they are released.

Switching gears heavily away from fantasy for a moment, I’d be extremely remiss to not mention one of Archaia’s best and most acclaimed comics, the (very) mature readers hit man saga The Killer. Adapted from the French comics by Matz and Jacamon for an English audience, this series delves very deeply into the mind of the unbalanced, nameless main character and the results are both disturbingly introspective and action packed. For an in-depth look at what makes The Killer tick, please see my article here.

Fantasy has been a mainstay in comics, in one form or another, since their very inception. Still, in more recent times, it has become increasingly rare for a title to truly stand apart from others in an overcrowded and overly familiar genre. Today, one comic has clearly carved out its own detail rich corner for itself and proved itself the new standard for sequential high fantasy and that comic is David Petersen’s Mouse Guard.

Set within the deepest of forests during the middle ages, the Guard of the series’ title are a brotherhood of mice sworn to protect others of their kind from the numerous dangers that surround them, not the least of which are the monstrous natural predators they face off against on a near constant basis.

With a relatively small amount of material published so far (the current miniseries, Mouse Guard: The Black Axe, is but the fourth) Petersen has created an organic universe so heavy in mood and naturalistic detail that the reader’s suspension of disbelief is immediate. This reality, and the characters that live within it, are as believable as any presented in comics past or present.

Enriching the above is the establishment of an ever expanding mythology within the mice’s world. The Black Axe (the first two issues of which are available now with the third coming soon) takes place 4o years prior to the established storyline. It tells of the title’s legendary, lost weapon and of Celanawe, a heroic guard mouse who agrees to help an elderly distant relative, Em, in a search for the mythical item..

A multiple Eisner Award winner, Mouse Guard is high fantasy played out on an epic scale as seen through the eyes of the smallest of creatures. It’s also a grand reminder of how awe-inspiring and imagination rich this medium we celebrate is, and why I love comics so much in the first place. 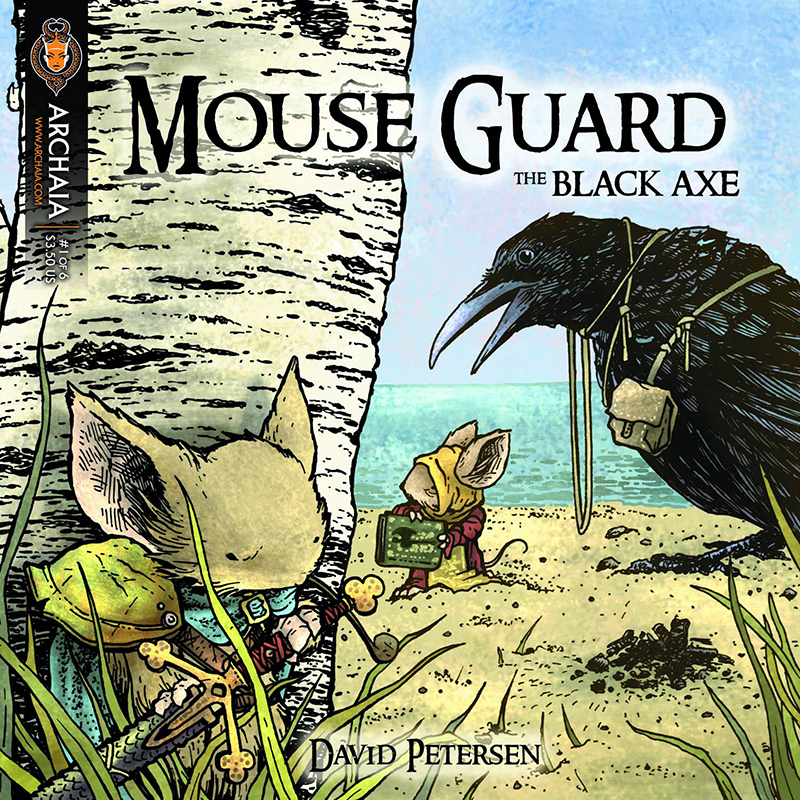 So, if you’re a bit weary with “the big two” treating your favorite characters and their universes as things that can be killed off, rewritten, and pulled apart at the seams at any given time, why not give independent comics a try? There’s something for everyone in the indies and Archaia is a great place to start to find out more. You don’t have to abandon those long established comic universes, though you may be surprised at the indie supernovas of talent that have been continually forming all along.