The Halloween weekend saw the appearance of the third annual Long Beach Comic Con (or as it is now known the “Long Beach Comic and Horror Con”), and I am extremely happy to report that it was the best year yet. What clearly sets the LBCC shows apart from its Southern California con counterparts is an actual emphasis on comics themselves, the writers and artists who produce them, and the greater illustrative art world that exists comfortably alongside the sequential medium itself. 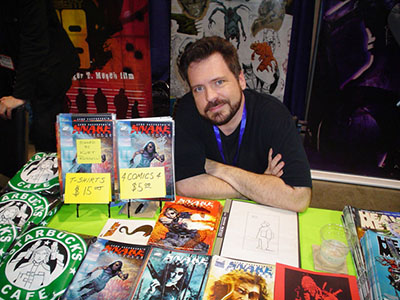 This is a very welcome and continued progression from last year’s great Long Beach Con and offers proof positive of the art-centric approach that is now beginning to define what the Long Beach event is. Indeed, the “Artist’s Alley” actually took up a very sizable chunk of the show floor with a wide variety of creators taking part, including mainstream stalwarts, indie superstars, self-published hopefuls, and pop-surrealism paint slingers. So many notable attendees were on hand that the Con’s two day run ended up being clearly not long enough to speak to all the talented folks gathered. Still, I filled the allotted time with as much as I could and here is a look at some of the great creators, fun events, and far-out ephemera that made the Long Beach Comic and Horror Con such a good time.

Violent Messiahs co-creator/writer William O’Neill was on hand to talk about the upcoming short film Agent 88 (being described as Mary Poppins meets Kill Bill) as well as have copies on hand of his highly entertaining 2003 comic mini-series John Carpenter’s Snake Plissken Chronicles.

The Chronicles series was created with the full blessing (and story approval) of John Carpenter and the legendary, late producer Debra Hill. Given that Carpenter himself made a rare con appearance over the weekend, these books made for an ideal items to have signed. Unfortunately, in the midst of typical con hubbub, I missed the chance to meet Carpenter, who has been a filmmaking hero of mine since childhood. Luckily, thanks to meeting O’Neill at a con earlier this year, I already have a copy of Chronicles signed by Carpenter, Kurt Russel, O’Neill and series artist Tone Rodriguez. 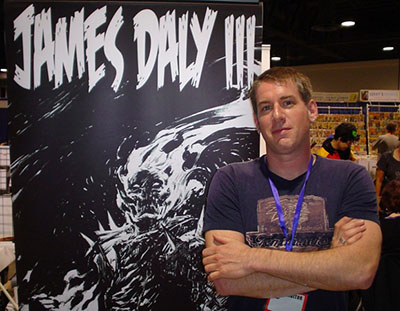 Sharing a space next to O’Neill was talented illustrator Amanda Cook, who spoke about a sensational new Los Angeles art gallery named Petra Gallerie that adheres to an aesthetic in which the worlds of comics, fantasy illustration, CG works, tattoo art, and pop surrealism overlap and infuse one another. As such Petra promises to stand out as truly unique, even in a city like L.A. where art spaces are in abundance.

Books published by Raw Studios are inspired by, and exhibit a clear love for, the detail rich science fiction and horror comics of the past. Raw founders Thomas Jane and Tim Bradstreet were on hand throughout the weekend to speak with fans about their beautifully drawn, lavishly produced releases and what we can expect next from their one-of-a-kind company.

Speaking of Raw Studios, one of the artists I was most looking forward to meeting was James Daly III who illustrated the first six issues of the excellent Bad Planet from a script by Thomas Jane & Steve Niles.

In speaking with James, I was not surprised to learn that many of his influences lie within the work of comics and illustration greats like Wally Wood, Al Williamson, Franklin Booth, and Roy Krenkel. Daly’s painstaking attention to detail reveals a dedication to craftsmanship that is rare in today’s comics.

It was great to see 8-time Harvey and Eisner Award winning artist & colorist Steve Oliff at the LBCHC. When the classic sci-fi manga Akira was first adapted for English readers in the late 80’s/early 90’s it was Oliff who had the daunting task of hand-applying color to all 2,100+ pages of b&w copies given to him by the epic’s creator Katsuhiro Otomo. Now Oliff is selling some of these beautifully colored pages at appearances and at $30 a piece these are, and I’ve said this before, EASILY the best deal on art to be fond at a convention (Otomo himself has never let go of a single page of original Akira art).

It’s always great to see artist Mark Dos Santos, whose renditions of heroes and villains influenced by illustrators of the past such as Alphonse Mucha and Norman Rockwell are always a big hit with convention goers.

Cons are a great way for those trying to break into the comics industry to gain exposure and get their book out into the public’s hands. One such notable up-and-comer is Adam Tinius who, along with brother Austin, has created Holli Hoxxx, a sci-fi tale which imagines a future in which Earth has lost its gravity, necessitating the creation of gravity boots which need to remain worn and charged at all times to prevent the populace from floating away into the ether. 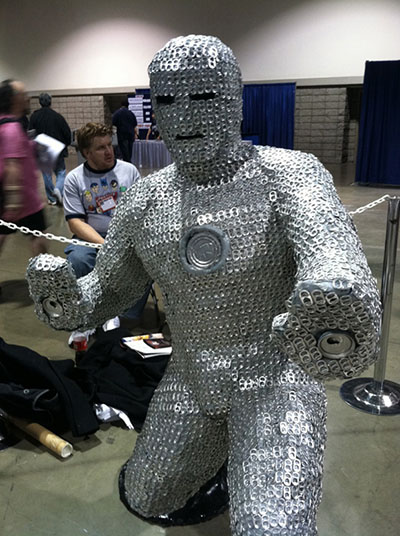 Featuring fully watercolored art by Stefano Cardoselli, I’m looking forward to seeing where Holli Hoxxx goes from here with a second, double-sized issue that is soon to be released.

Superhero comics and folk art meet head on in the sculpture of Brad Walker who had at the show his interpretation of the classic Iron Man suit whose surface is comprised of over 1,000 individual can tabs. A nearby card explained that a stranded at sea Tony Stark had “forged together masses of fishing nets with the tabs of cans drifting in the ocean by squeezing the carcasses of dead jellyfish onto the surface of the makeshift armor”. This kind of unexpected oddity will almost always become one of the most memorable moments of a convention for me.

Saturday night came to a close with a massive zombie walk that began at the convention center and continued on through downtown Long Beach. Several hundred strong the walk was quite a sight to see, but not many in the throng seemed to actually be playing the role of a proper zombie, with barely a groan, moan, or cry for “Braaaiiinns!” to be heard.

Being a huge fan of stop-motion animation, it was a welcome surprise to see characters and props from the Adult Swim program Frankenhole in attendance along with some of the incredibly detailed sets which they populate. Inspired by the classic late 60’s tv special Mad Monster Party, the deliriously odd Frankenhole returns for a second season on December 11.

Of all the guests at the Con I was perhaps a bit unprepared to meet none other than the Lord of Darkness himself, Satan, who appeared in the guise of top-tier horror writer and all-around nice guy Steve Niles. The Devil had certainly done his homework, as he had an answer for all Niles related questions regarding topics such as the mortal’s excellent early Clive Barker comics adaptations and his recent work with legendary artist Bernie Wrightson. Earlier that very day Satan also appeared in a mass of dark storm clouds, as well as on a panel with comic scribe Jimmy Palmiotti. Together they offered many great tips for those interested in breaking into the sequential biz.

Speaking of the great Wrightson I’d like to close my look at the 2011 Long Beach Comic and Horror Con with highlights of the conversation I had with him regarding the state of conventions in general as well as the Long Beach event in particular. At first we lamented how cons have become a springboard for other areas of media such as movies, taking the focus away from the art form we all love. However, Wrightson happily went on to state that the Long Beach show felt like the fabled early years of the San Diego Comic Con where professionals and fans can meet in a more civilized setting unencumbered by the other distractions that are now commonplace.

Hearing that positive opinion from someone who clearly knows as much as anyone the purpose of comic conventions and what they can and should be is a great confirmation for what I was already thinking about the growing Long Beach event. Still, if any of the organizers of the event happen to read this I do have a couple of suggestions: how about an extra half or full day on Friday? Also, please do away with the wrestling ring. We’re still wondering what that was all about.