The Eisner winner for Best Continuing Series is back – that’s right,Chew #22 hits comics shop this week. This is part two of the Major League story arc. If you have not read part one, make sure to check out my review of Chew #21. Ok good, now you know what’s going on in the previous issue, right? Because I don’t want you to tell me I spoiled this book for you. 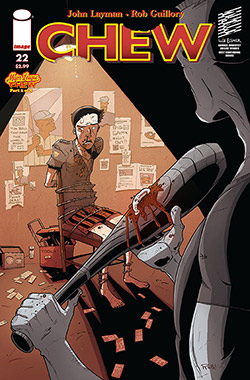 First of all, when you’re talking about Chew, you have to give it up to Rob Guillory: that man is amazing. Sure, I know John Layman is the mastermind on this weird, funny, unique book that makes me laugh and wonder where it’s going in every issue. But just like I said in my previous review, Guillory’s artwork just gets better over time with every new issue. Chew #22 shows me why Guillory is one my favorite artists of the year.

What about the story? I’m sure you’re asking yourself “what’s going on” right now. Well, in part two of Major League, we find out what’s been going on with Agent Chu’s daughter Olive, while at the same time Agent Chu himself is looking for her. What makes Layman’s writing interesting is how he uses other characters to tell us what is going on in the Chew universe. We do see Tony quite a bit in this issue, yet he’s not the main character, which is really interesting.

We also follow rogue Agent Mason Savoy’s right hand man, named Caesar just like the salad, and the weird adventure he goes on in this issue. Knowing the history of this book, with random weird stuff such as the mystery of the murdered Mascot and Amish ice Cream entombment – well, hopefully they are storylines that we will go back to in later issues of Chew.

This is what’s great about Chew – there are not many characters yet. All the supporting characters feel like they should be part of the regular series; this is due to Layman’s amazing writing. When reading, I forgot about what was going on with some of the main characters because I was intrigued by Caesar’s side mission.

Then something I did not see coming happened, and I would not be surprised if the book took a new direction in the upcoming year. “What was it?” you may ask yourself. Guess I’m not gonna tell you, and now you know what you have to do: that’s right, pick up Chew #22. This book just gets better and better – I don’t know how that is humanly possible, but it does. I’m very intrigued to see where the Major League storyline takes us.

I can tell you already that this is on my list of top 5 comic series of the year. It’s just brilliant and Chew is a perfect example of what fun should be in a comic. And if you wanted to get into Chew, or get a gift for the holidays, remember the CHEW Omnivore Edition Vol 2. hardcover comes out this week. I am waiting for my copy in the mail!