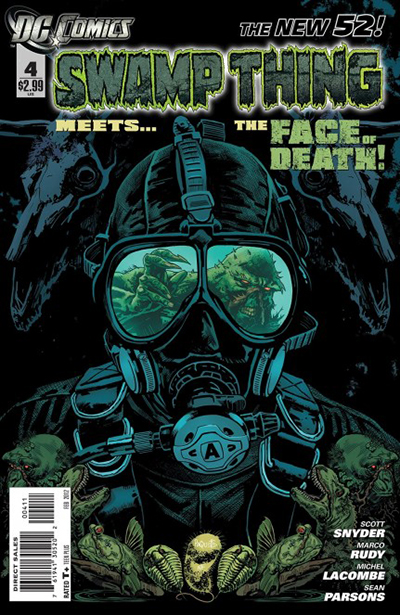 And, we’re back! It’s written form again for Horror on the 13th! I can’t decide what I like better. Really, I just like mixing it up, because to me, talking about horror is talking about horror. In fact, I agree with that statement almost to a fault. I mean, I really do like and appreciate all horror, even the bad stuff. Horror taps into something very primal in all of us. It’s the fear of the unknown or the mysterious or the abnormal. Mostly, it’s trying to understand things that we, as humans, don’t understand or have no way of understanding. When it’s not that, it’s blood and guts and monsters! Personally, I think all those are the same, but that is always up for debate. Horror has debates! And theories! I love it.

What happens when horror moves from those obscure, hard to find, creator owned comics to DC’s “New 52”? Awesome, that’s what. I really don’t have another word for it. Article written. Obviously, I’m kidding, because there is no fun in that. What you actually get is mainstream horror in the comic world. Yes, a lot of people consider books like American Vampire and iZombie to be fairly mainstream, but Vertigo titles have always been able get away with more in their books. That is, until now. Titles like Swamp Thing, Animal Man, and I, Vampire have made it into the regular DC rotation, and those awesomely scary titles get away with everything an indie comic does.

Let’s start with Swamp Thing. First off, it’s written by Scott Snyder. I have mentioned a few times that I am having a love affair with his writing, and it absolutely translates into this book. First off, I hate swarms of anything. To have this villain be made of several swarms of several different things, including bugs and bones just makes my skin crawl. I’m all about a convincing curse mythology, and Snyder does exactly that. Not only is it amazing writing, but the art goes right with it. It’s bloody and graphic and violent and tender. Those words don’t seem like they go together, but open up Swam Thing. They absolutely do. I was actually surprised how intricate the backwards heads were drawn. The artists do no gloss over anything. I think that I may have mentioned that Scott Snyder writes this, and I love him.

Then we have Animal Man by Jeff Lemire. Personally, I was incredibly skeptical about this book, because I thought it looked dumb. I did not understand why anyone would want to reboot this guy. I thought they wasted this new title. Boy! I could not have been more wrong. This book is super creepy. I like how it’s tying in to Swamp Thing. The mythology behind “The Red” and “The Green” is solid, and I love diving into what these amazingly creative minds can come up with next. I think, if I were going to pick, my favorite thing about these books is the fact that they aren’t afraid to mess with kids. Like, the four year old daughter in Animal Man has these powers and can enter “The Red.” All the while, an ancient agent of “The Red” is attacking her brother. Not to mention, in Swamp Thing the main villain, who has been killing a lot of people is a young boy. They don’t shy away from making it brutal, and I really respect that. It’s a classic move in horror, solidifying these books as staples in the horror universe.

While DC has their natural creatures covered, they did go with one amazing horror book that comes from classic monsters. Joshua Hail Fialkov’s I, Vampire is a treat in my pull list every month. I love Fialkov’s spin on classic, well, everything! He takes a love story, where each member of the couple lies on the opposing sides of a major vampire debate. So major, in fact, that it could lead to war. Mary is such an amazing antagonist, attempting to pull the vampires in her favor. She has no remorse and no sympathy for the humans. I love that to bits! I mean,
Vampires are monsters. 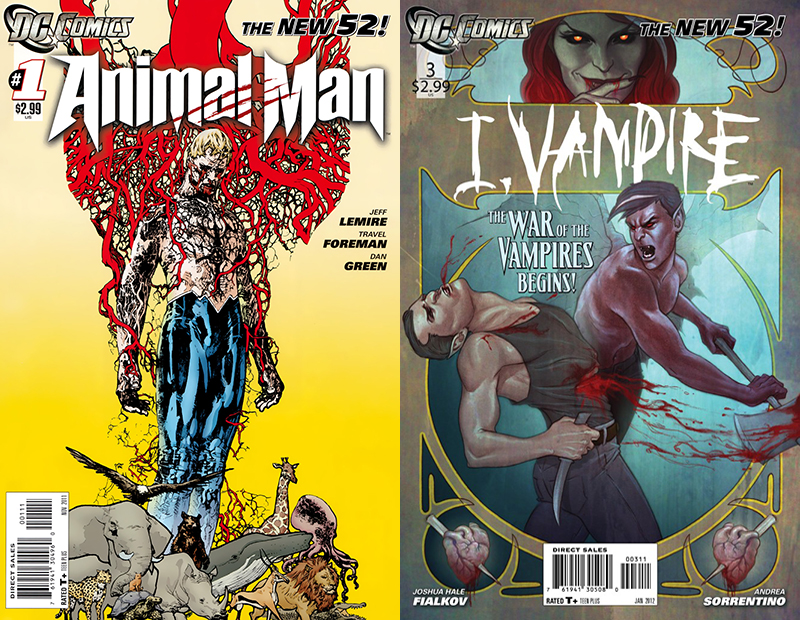 We are their food. I hate the romanticizing of vampires to the point where they might as well not have fangs. If they just want to hang out, while ignoring their cravings and basic vampire needs, then I want nothing to do with them. Vampires eat us, and Mary does exactly that. Somehow, she is also amazingly sexy doing it. And, in her villainous nature, she is also the character that sees things as they are. The world is changing, and she will be the first to take advantage of that, even if it means she has to forsake the man she loves. I love how she knows everything even when she doesn’t. Read the book, because as vague as that statement was, it makes total and complete sense. Well done, once again, to Joshua Hale Fialkov for making me love and fear a character’s strengths and weaknesses, because Mary is one hundred percent that girl who will love you with everything she has and rip your heart out. Of course, Mary will also drain your blood.

I want, in conclusion, to congratulate DC Comics for having enough faith in these writers and titles to take a chance and make them regular DC titles. They sure do brighten up my day whenever I pull one of the out of my file. As much as I love my indie and creator owned horror titles, I am really loving that horror is getting out there in the comic world in a very real way. My hope is that the interest in horror will translate to more creator owned titles being picked up. Then horror will dominate the comic world!!! Muahahahaha! Just kidding. Kinda. I don’t really think that will ever happen, but a girl can dream. Thank you all for putting up with my bloody and monstrous diatribes in 2011. I hope to frighten the hell out of you all in 2012. Until next year, stay scared!