As 2011 comes to a close, I can say with a bit of relief that the amount of quality content being published within the world of comics continues to increase steadily. The interest in recent years in high-end, lavish, oversized archival editions and spiffy comic related art books signifies that people are not just reading comics for their obvious entertainment value, but also seeing the medium more and more as the valid literary and artistic arena it’s been since day one. As such I’ve assembled a list of 2011’s best that includes titles from across the increasingly eclectic (yet all welcoming) world that are the comics of today. 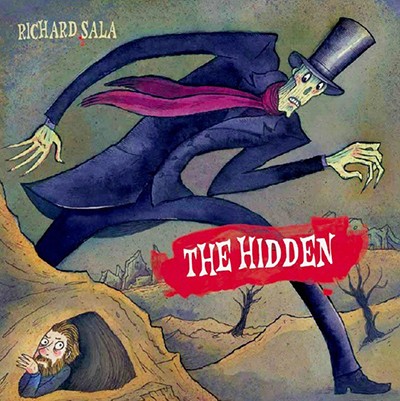 The Hidden by Richard Sala / Fantagraphics

As a long-time admirer of the work of Richard Sala I know that he can always be counted on to deliver the thrills in spades, but he truly pulls out all the stops, narratively and visually, in his latest graphic novel The Hidden.

In The Hidden Shelley’s Frankenstein is reshaped into a full on end of the world scenario complete with roaming patchwork monstrosities, cannibal businessmen, hapless humans, and apocalyptic visions all presented in gorgeous, super saturated, watercolor hues.

We come to learn that a scientist named Victor’s attempt to produce a new, purer kind of human resulted instead in the creation of a towering undead creature equipped with enough intelligence and free will to produce more of its own kind. A primary target for the creatures whose intent is to claim the world from us? Women, without whom our species will cease to exist.

Sala’s heady, sometimes hyper bizzare comics can have a reality shifting effect on the reader and The Hidden produces this feeling more profoundly than perhaps anything he’s done to date. Expressionism-tinged art populated with creatures that seem inspired from one’s long dormant childhood subconscious results in a more potent dose of creepy than anything else in the medium can deliver. Imagine your unease if all the ghouls and ghosts of the Halloweens of your forgotten youth were suddenly made real, so real that they are about to come crashing through your front door at any moment. Oh, and don’t bother running to the neighbor’s because the monsters have stopped there first. That’s what reading The Hidden is like and that’s also what makes it not only one of the best books of the year, but one of Sala’s best works period. 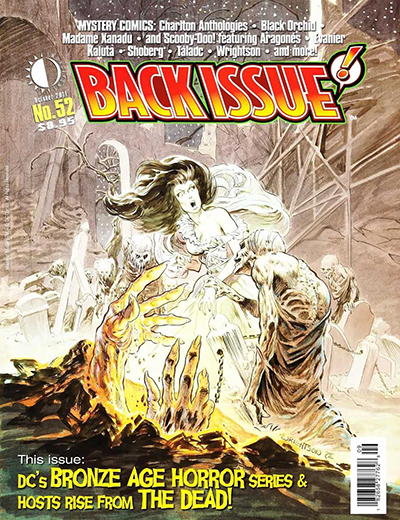 Any volume of the Michael Eury edited Back Issue magazine is well worth picking up due to its affectionately written and well researched articles, but #52 is worth noting in particular for its wealth of information on Bronze Age horror comics, with a particular focus on likewise DC titles of the era.

One really couldn’t over emphasize the importance of this era for fans of horror comics. The genre, which laid largely dormant since the inception of the dreaded Comics Code in the mid-1950’s, was being resurrected, bolstered by the magazine market success of Warren’s Creepy and Eerie and the infusion of brilliant young illustrators like Bernie Wrightson and Michael Kaluta (both profiled here).

Also hugely important to the history of horror comics is that several of the characters and titles being created during this era, including Black Orchid, Madame Xanadu, Cain & Abel, and House of Mystery are laying the groundwork for what will later be the entirety of the Vertigo universe.

Add to the above several other great like-minded features, not the least of which is a fun interview with Sergio Aragones about his time on the highly weird DC humor title of the era Plop! and you have a must-read issue of a must-read publication.

Blackjacked and Pistol-Whipped: A Crime Does Not Pay Primer / Dark Horse

One of the most unexpected releases of the year was undoubtedly this collection of unsavory tales from the pages of the much imitated anthology Crime Does Not Pay.

Crime comics are back in a big way in recent years and modern fans may feel these older tales (which date from the 40’s & 50’s) would be a bit too quaint for their gritty tastes. I can attest that little trace of the supposed innocence of this bygone age is on display as these stories (created prior to the Comics Code) are as vicious and grimy as they get. Personally I find the violence seen here, as presented in the style of the era, more disturbing than their more “realistically” drawn contemporary counterparts.

What makes everything here take on an extra tinge of seediness is that one of the artists and co-editors of Crime Does Not Pay, Bob Wood, actually murdered a woman in 1958 after an eleven day drinking binge by bludgeoning her with an electric iron. It is this scenario that the collection’s newly created cover (by Pete Poplaski) is depicting.

With 200 pages of vintage comics reprints, an introduction by modern crime scribe Brian Azzarello, and an expansive, information packed essay by publishing legend Denis Kitchen, Blackjacked and Pistol-Whipped is indeed a great primer for those interested in seeing just how far comics could go back in the “good old days”. 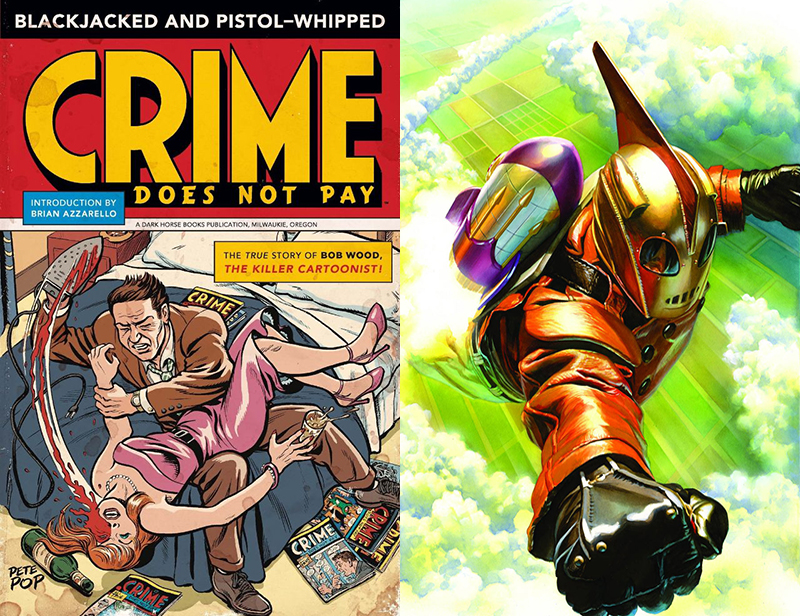 When IDW announced they were releasing a mini-series featuring new tales of The Rocketeer there were definite grumblings to be heard from some comics fans. This was not unexpected at all since the original Rocketeer tales, as tightly written and beautifully drawn by their creator the late Dave Stevens, stand as some of the greatest adventures comics ever, labeled as classics of the genre almost since the day they hit the shelves.

Now that the four issue mini-series Rocketeer Adventures has been released it’s clear that fans of the hero had little to worry about.

The top-notch creators involved (which include Dave Gibbons, Darwyn Cooke, Tony Harris, Bruce Timm and Stephanie Buscema amongst many others) wonderfully capture the vibrant pulp pop of the original releases. It’s apparent that the talents involved are having a great time working with a character who is universally seen as the gold standard for modern day adventure comics.

From Alex Ross’s vibrant covers to the numerous eye popping pin-ups, Rocketeer Adventures #1-4 are the most fun comics I read in 2011. If this level of quality could be maintained, I think another mini-series would be greeted by fans with very open arms.

(On a side note, 2011 also saw some Peanuts fans up in arms about the release of the first original Peanuts tale since the passing of creator Charles Schulz. For a look at the results please see here).

Presenting classic fairy tales, long missing much of their original potency through sugary interpretations, through a dark modern day filter is always bound to be interesting. Here, however, interesting would be the tamest word one could use to describe  the astounding achievement that is Pinocchio by Winshluss, which sees it’s first English translation courtesy of legendary underground publisher Last Gasp.

The winner of the highest award at the 2009 Angouleme International Comics Festival, Pinocchio recasts the fable’s familiar supporting character’s as morally questionable figures who have little care for anything but their own agendas. Even the creation of Pinocchio himself is spurred solely in the hopes to sell him to the military as a multi-functional robotic war machine. 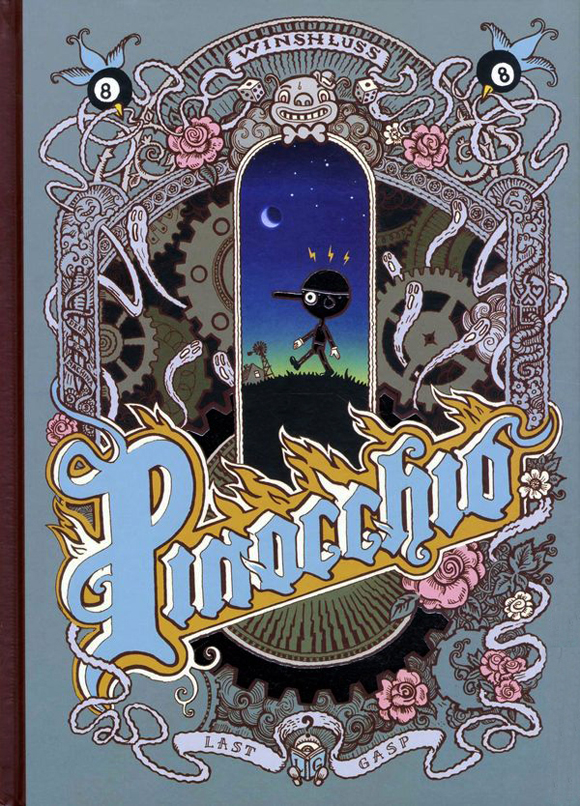 Told in a mostly wordless fashion with art that can change from pen and inked multi-paneled pages to fully painted splashes, Pinocchio is a constant visual overload (in a good way, of course) from the first page to the last. Presented in a nearly 200 page, high quality, oversized hardcover, Pinocchio is more than a great piece of graphic storytelling, it is an object of beauty in and of itself.

Please join me again next week for a continued look at the best and brightest of 2011 including work by David Petersen, Michael Kupperman, Art Spiegelman, Scott Hampton & Mark Schultz!