Cosplay Girl of the Month: January 2012

One of the features we do here at Comic Impact is the cosplay girl (NO anime, manga, role-playing games just comics) of the month, that’s  right hot girls dressing up like your favorite super- hero characters. This month we’re privileged to have  IvyQuinn as our Cosplay Girl of the Month!

1-What is your name?
In the costuming world I go by IvyQuinn. 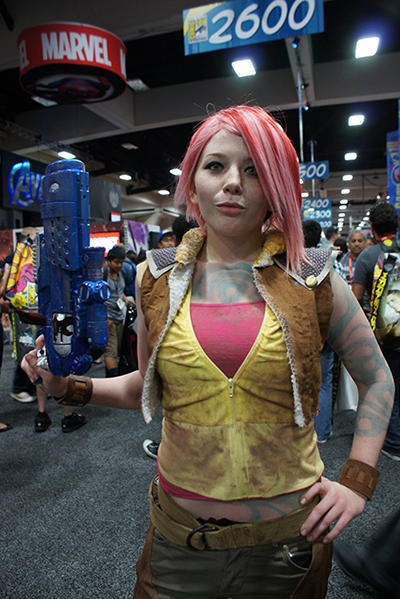 3-Do you read comics and if so, what are your favorite titles?
I started seriously reading comics a couple years ago, right about the time I really started getting into costuming. I wanted to know my favorite characters better, so I started picking up series with Poison Ivy or Black Widow or any of the other Batman gang.  After realizing how much I loved comics, I eventually started branching out into other series from there. Unfortunately I’ve recently dropped off reading new books after the new 52 came out, so I’m a little behind, but I’ve been catching up on Artifacts, Lady Mechanika, Gotham City Sirens, Echoes, Batgirl and Deadpool and should be back to reading new series soon.

4-What is your favorite comic book character?
Batman. Hands down. While there are a lot of other amazing characters that I love, Batman has always appealed to me the most because of his lack of superpowers and his amazing Rouges gallery. Batman is not seemingly invincible like Superman and can’t just “conveniently” develop a new manifestation of his powers to solve his current problem like some other heroes. It takes detective work, (and money and high tech, and serious martial arts skills, but you get my point) and sometimes even with the best equipment he loses. Sometimes he even loses team members along they way and in the end I think that’s what makes him the most real to me and is what makes me love the Batman universe; they have problems, they lose, they learn, they’re “real” people at the end of the day.  I also love the dynamic between Batman and his villains, and how fine that line between “good” and “evil” is for every character in that world, and how easy it is for them to cross it; even Batman himself.  I love that his main villains are developed characters with just as much effort into their personalities and motives as Batman which makes for great moments between the characters, where they can push each others buttons and make a really interesting and compelling story.

6-What got you into cosplay?
I was involved in theater from the time I was very small up until about three years ago.  When I stopped performing, one of the things I missed most was designing, wearing and acting in costume. My boyfriend and a few other mutual friends had been building costumes for awhile and so they encouraged me to pursue cosplay as a way to fill the theater void and show my love for my favorite comic characters. I built my first version of the original animated series style Poison Ivy  and I fell in love with costuming from there and never looked back.

7-If you do more then one character which one is your favorite, and if you do only one do you have some ideas for more costumes? While Poison Ivy will always be one of my all time favorites,  I have to say my current favorite costume to wear is Black Widow. I love having the freedom to move and not having to worry about leaves falling off, body paint rubbing off on people, or any other huge wardrobe malfunction happening. I also really enjoy being able to be a character who not only gets to have a beautiful costume, but gets to have one that’s surprisingly functional and practical with some serious firepower on top of that.  Widow’s not just a pretty girl for the sake of being a pretty girl, she’s also a strong, intelligent badass who knows how to handle herself and I love that.

8-How long does it take for you to make a costume?
Well any of the Ivy costumes should really never take more than a week or two, it’s just willing myself to have the patience to sit down for a whole day and put each of those leaves on one at a time! Black Widow and some of the current costumes i’m working on are usually a matter of finding the right pieces at the right time, especially since I have ridiculously poor sewing skills and can’t just stitch up a suit for myself.  In a perfect world each costume takes a few months, but again it really depends upon finding the right pieces, my schedule and of course spare cash.

9-Have you met any of the artists or writers where your costume is based on their work?
Sadly not yet, although I would love to get a chance to meet Adam Hughes and  Bruce Timm and Paul Dini, as well as Gail Simone and Ron Marz. Hopefully our paths will cross at a con in the near future 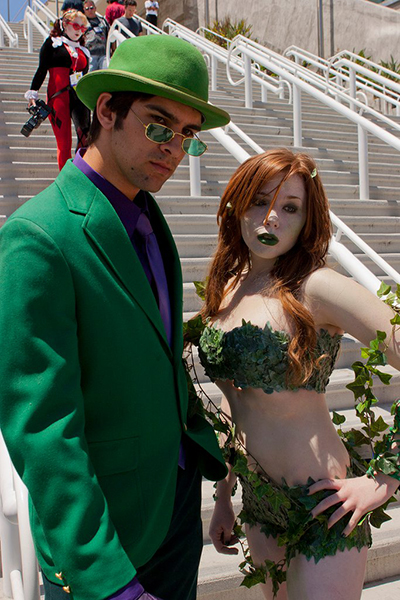 10-Do you buy any toys, busts and etc. based on some of your favorite costumes?
I tend to buy statues or busts that are either characters I or my boyfriend have already or are going to cosplay. Since it can be so expensive to collect statues we only ever buy ones of our favorite characters, and since those also tend to be the characters we want to costume, it just became an unwritten rule that we buy “our” characters and I’m always on the look out for more.

11-So do people know you dress up like a comic book hero on your free time? Of course! My Facebook is always plastered with pictures from conventions or the most recent photoshoot, so my friends would have to be pretty oblivious not to notice. Plus, most of the people I spend time with are also involved in the costume or comic world on some level, so it’s pretty standard.  Between theater and cosplay I don’t think anyone, including my family and friends from work, don’t know that I run around in costumes, and they’ve always thought it was cool and been really supportive.

12-What is the funniest thing that has happened to you at a convention?
A couple year years ago friends of ours were staying at the Marriott on Coronado Island, which connects to directly to the convention center, but requires you to take a ferry to get there. Our group of Batman, Catwoman, Riddler, Ivy and Robin were running desperately late all morning and had one last chance to catch the ferry. We ended up having to sprint across the boardwalk to the pier, in full costume, and wedge ourselves into a packed boat of tourists right before it was about to ship out.   The looks we got from people in other boats, including people shouting and waving at Batman and trying to take pictures of him stuck on a tiny ferry, not to mention the looks from people watching me, Batman and Robin trying to sit down in costumes that we could really and truly not bend down in, and then struggle to get out of the boat was pretty priceless. I’m pretty sure people didn’t have a clue what was going on – especially the people who saw Batman and Robin being chased towards the marina by three of his villains.

13-Do kids come up to you and think you are the real life character?
Honestly it’s about half and half depending on where and who I am.  A few years ago at Free Comic Book day I was walking down the street with Batman in my animated series Ivy and we passed a group of kindergarten and preschool kids who waiting in line. The kids were all excited to see Batman and I wasn’t expecting much recognition, but one little girl got very excited and yelled  “It’s Batman and Ivy!! It’s Batman and Ivy!! Hi Batman, Hi Ivy!!” I blew her a kiss and she got the biggest smile. That made my day.  At Comic con older kids tend to recognize Black Widow and the leafy Ivy, but a lot of the time their scared to come up because Black Widow has a gun or Ivy looks a little mean. Not many kids recognize Lilith from Borderlands either. Hopefully one day I’ll have a costume that little ones will recognize!

14-Do you have a website or a MySpace? So people can contact you? Absolutely – All of my costumes and works in progress can be found a on my costuming groups Facebook: https://www.facebook.com/TheGC5 . We try and update it as frequently as possible with new projects, con pictures and anything else costly and comic related that we’re doing  We’re always happy to talk to people, answer questions or just say hey, so check it out 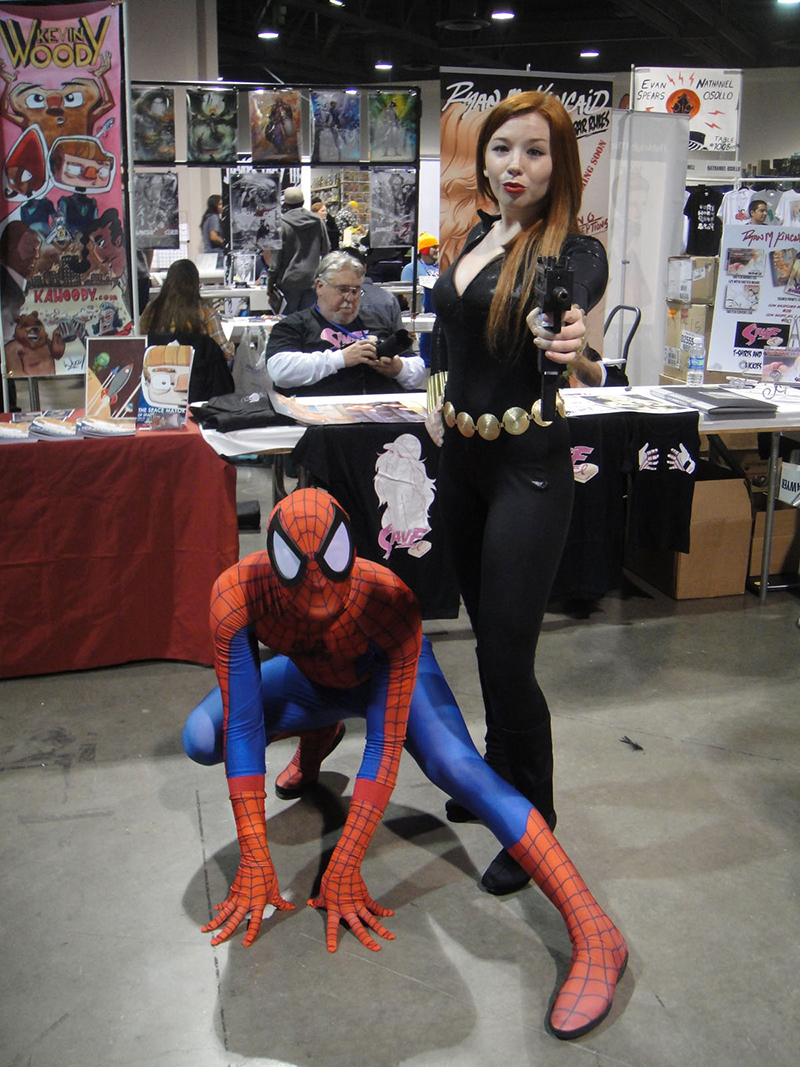