In 1982 directors Jim Henson and Frank Oz, in collaboration with acclaimed artist Brian Froud, introduced us to the vivid world of Thra via their high fantasy film classic The Dark Crystal. Like many great fantasy epics a key reason for the success of Crystal lies in the believability of the setting in which it takes place. The setting of Henson, Oz, and Froud’s grand effort is rife with suggested histories and mythologies, a place teeming with a vast array of arcana seen everywhere: on clothing, jewelry, amulets, weapons, carved into ancient architecture, and scrawled across ancient crumbling parchments. Add to this a beautifully fleshed out naturalistic setting filled with a seemingly endless array of flora, fauna, and strange creatures both great and small, and you have a world that you not only believe exists, but has always existed from time immemorial. 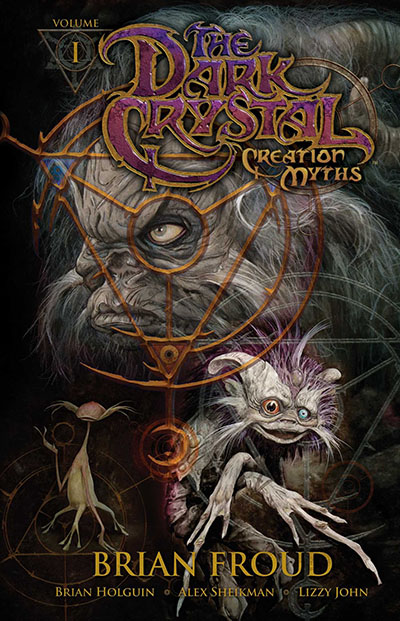 The world of Thra is one that is very wide open for new epics, adventures, and histories, and thankfully now some of these can be told starting with The Dark Crystal: Creation Myths, the first of a trilogy of graphic novels. This lavish 102 page hardcover arrives courtesy of writer Brian Holguin, artists Alex Sheikman and Lizzy John and publisher Archaia, a company well known for delivering the goods when it comes to high quality fantasy comics.

As told to us by a mysterious, shrouded storyteller, Creation Myths opens during the time of pre-history of Thra, a primeval place in which every life form on the planet co-exists as tiny pieces of a single world-wide consciousness. Pushing life forward is the all powerful Crystal which lies deep underground.

After a time Thra desires a voice in which to speak from and the planet itself gives birth to Aughra, a central supporting character from Henson & Oz’s film. Her role is to act as both observer and guide for the world, Mother Earth to every creature and component of the planet.

Taking a particular liking to the gentle, elfish Gelfling’s, she imparts wisdom to them which in time advances both their society and way of life through the centuries.

In time Aughra gives birth to a son, Raunip, the exact nature of his conception still a mystery at this point. Though devoted to his Mother and caring of the Gelfling’s, he is concerned of the prophesied change for the world which is said to come from above.

His worry deepens and gives rise to suspicion with the arrival of the mystical creatures of light, the Urskek. It is these powerful benevolent beings that summon the Crystal from the earth and construct a gleaming fortress in which to house it.

The Gelfling civilization continues to flourish with the guidance of the Urskek just as Raunip’s distrust of the beings from beyond starts to grow.

By this point fans of the beloved original 1982 creation will be thrilled to see the various pieces of the story starting to fall into place, the whole of which will be the Thra seen in the film, an oppressed place that has turned tragic for the nearly exterminated Gelfling race.

One of the amazing things about the often poetic storytelling by Holguin in Creation Myths is that although we are being filled in on the history of a setting we are partially familiar with, the grand creation story we are reading here is so far-ranging and all-encompassing that it can fit comfortably amongst our own recognized global cultural mythologies.

Taking on the task to illustrate a world created by a fantasy artist as highly esteemed as Brian Froud is a daunting task, but the work of Sheikman and John  is more than up to the daunting task. The lushness and vibrancy of the work seen here is a perfect complement (and addition) to what has come before. Froud himself gives his approval in his introduction to the book noting the “savage beauty” displayed across every page.

It is vital to note that Froud himself not only gives his blessing on this project, but also designed several new characters for the book including Raunip. Some of the deigns can be seen in an interesting (albeit brief) sketchbook section in the back of the book.

Accompanying Holguin’s tale are short prose stories by Barbara Randal Kesel that tell of the myths that exist within the Gelfling culture itself. Kesel is a great writer to present these tales as she is no stranger to the world of Thra: she’s the author of two manga flavored graphic novels titled The Legends of the Dark Crystal. The prose tales are prefaced by stunning full-page images by Sheikman and John.

Archaia has scored a major coup with being able to work in various areas of the Henson universe, and conversely The Henson Company is very lucky to have Archaia, with their commitment to consistently high quality storytelling and beautiful artwork, be the tellers of new tales with their beloved characters. The Dark Crystal: Creation Myths is a fantastic first chapter of a story that fans have waited thirty years to be told. As a huge fan of the film myself (with the prerequisite very high expectations), I couldn’t be happier with the results of this saga so far and am eager to see where the story progresses from here. This is high fantasy told on a grand scale but presented in a way that is accessible both to those familiar with this setting and those new to its many wonders. Although this particular story may become (as is necessary) increasingly bleak, I for one cannot wait to see the fantastic visions that are yet to come.