Cosplay Girl of the Month: March 2012

One of the features we do here at Comic Impact is the cosplay girl (NO anime, manga, role-playing games just comics) of the month, that’s right hot girls dressing up like your favorite super- hero characters. This month we’re privileged to have BelleChere for this months Cosplay Girl of the Month! 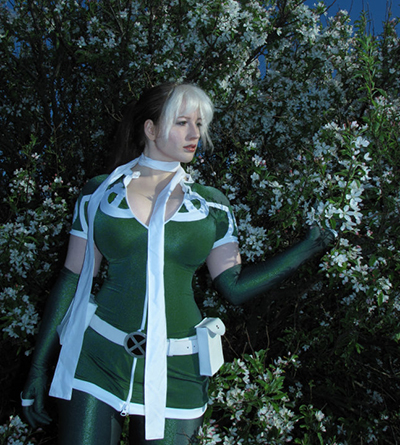 1-What is your name?
BelleChere

3-Do you read comics and if so, what are your favorite titles?
Of course I do! I used to have a pull list a mile long (Marvel, Avatar, Image, Dynamite) though when the prices rose, along with my local shop just down the street going out of business, I had to stop buying. I keep up with what’s going on, but for the most part I hear I’m not necessarily missing anything worthwhile, so I’m content reading back issues. My biggest collection is definitely X-Men titles!

4-What is your favorite comic book character?
I am a huge Rogue fan. However, I’m a huge fan of how Rogue started out, how she was a fiery Southern belle in the 90s, even in the early 00s. Now? I have no idea why Marvel has taken the path they have with her. I’m a big supporter of character progression and growth, but not when the character becomes watered down, and that’s how Rogue’s coming across to me lately. Disappointing! But she’s still my favorite.

5-Who are your favourite artists or writers?
Writers: The top of my list is Warren Ellis. I’ve enjoyed everything the man has created. Since the first series I ever read was Promethea, I have to pay hommage to Alan Moore, too. I enjoy Peter David, Mike Carrey, and 90s era Chris Claremont. Artists: I love a woman with curves. The art of Adam Hughes, Frank Cho, Joeseph Linsner, and Mark Brooks decorate my home.  Also, I love a woman who draws women with curves, and Amanda Conner is a hoot to hang out with, too. I feel I must say Jim Lee because that’s the X-Men I grew up with. Last but certainly not least, Frank Frazetta’s art captivates me.

6-What got you into cosplay?
I wanted to be Rogue for Halloween! In my search for how to possibly create her costume, I ran across a (now obsolete) X-Men cosplay forum. I had never heard of the word ‘cosplay’ before, and as a theatrical seamstress I always get to make costumes for other people, and help actors dress up when I want to do it too, so it was exciting to discover that people dressed in costume outside of Halloween and theatre. The people on the cosplay forum were wonderfully helpful, very supportive, and soon I had friends in the hobby and was really getting into it. The more support I got, the more conventions I got to attend, my passion for it grew and grew!

7-If you do more than one character which one is your favorite, and if you do only one do you have some ideas for more costumes?
Ouch, I have to choose ONE? I ultimately feel the most comfortable dressed as Rogue (big surprise, right?) and at one point was absolutely committed to creating every single one of her outfits. That desire has passed as time has gone on and the list of characters and outfits I want to cosplay grew and grew, but Rogue will always be on the top. It’s really difficult for me to choose an absolute ‘favorite’, though. Honestly, my favorite costume changes based on my mood, whether I’m feeling physically fit enough for it, or mentally strong enough to embody the character. One day I could say my favorite costume is Red Sonja, the next day Deadpool, the next day Jessica Rabbit – each character obviously having their own feel. If I bring a costume to a convention that I’m just not feeling that day, I won’t wear it. Always good to bring a back-up!

8-How long does it take for you to make a costume?
That depends entirely on the amount of detail. Black Cat? No more than 7 hours, max. However, a complex costume like any one of my Dawn outfits took up to 120 hours. The size of the outfit doesn’t necessarily mean that it took less time, either. For example, Red Sonja skimpy little number took roughly 70 hours to make, though that was because I hand-sewed each scale on. As I continue to costume, I challenge myself to try new tactics and learn new things, so my recent costumes have proven to take much longer to create than my earlier costumes. 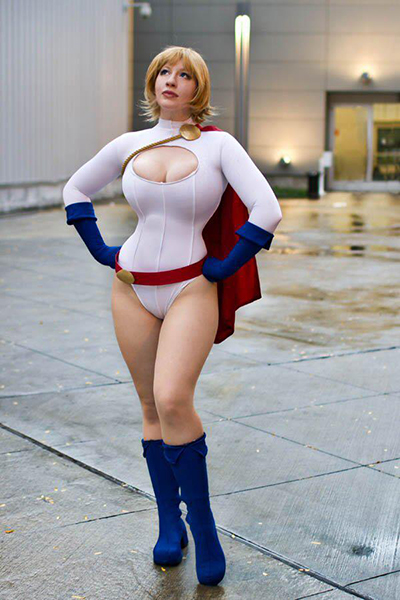 9-Have you met any of the artists or writers where your costume is based on their work?
Oh, you bet! That’s my bread and butter! I love to meet the artists, and the writers, wearing costumes that they’ve inspired me to create, thanking them for their positive influence. I’ve had my Spider-Woman outfit signed by Frank Cho, my Black Cat signed by Terry Dodson, and both Adam Hughes and Joe Linsner signed my Red Sonja. Sometimes, I’m flattered to have the writer/artist/creator come up to ME to tell me how appreciative they are of my skills! That’s always a huge moment for me and usually makes me smile for days afterward. One of the best conventions was when Avatar Press invited me to Wizard World Chicago to ‘work’ with Warren Ellis all weekend as Anna Mercury. When I got to meet Ellis, his reaction, how appreciative he was, was priceless. Same with Brian Pulido, when I again ‘worked’ with Avatar Press as Lady Death at SDCC! Some artists, like George Perez and Gail Simone, are HUGE supporters of the cosplay scene, and it always gives me joy to hear how enthusiastic they are regarding the hobby.

10-Do you buy any toys, busts and etc. based on some of your favorite costumes?
I’m running out of room for my busts/comiquettes/figures, I have so many! But then if I had more room, I would be spending way too much money on collecting them, hah! My apartment is covered in comic memorabilia. I am the scourge of a true collector, though – I take my toys out of the packaging and I play with them.

11-So do people know you dress up like a comic book hero on your free time?
They do. Since I work in theatre it’s not really a big deal, though I do blush when some of the guys I work with happen upon a picture of me in costume online. My boss will brag about my skills in working with stretch fabrics for me. My parents are very supportive of me (my mom is one of my biggest fans) and my friends usually want to join in with me. I’m also lucky in that my husband dresses up with me!

12-What is the funniest thing that has happened to you at a convention?
Most of my funny convention stories have to do with DragonCon (my favorite convention) but what happens at DragonCon stays at DragonCon. One time I was in Chicago and I was dressed as Anna Mercury (full body black studded latex, guns holstered everywhere, and a red curly wig that contests Peg Bundy’s hair) and someone politely asked me for a picture. I said sure, struck a pose with guns out, he took the pic, and then he said, “Thanks. Hey, who are you supposed to be? MJ?” He was entirely serious. All I could do was stare at him, then try not to laugh as I explained who Anna Mercury was.

13-Do kids come up to you and think you are the real life character?
Not really. I think most of my outfits are a little too obscure for many kids. Grown adults have, though – either complimenting me that I’m the comic come to life…or actually thinking I’m the character. I used to spend time trying to correct the latter, that I’m not ACTUALLY Power Girl, that I’m not REALLY going to fly in to save the day, but now I’ve stopped trying and just avoid them.

14-What do you like to do when you’re not costuming, such as other hobbies?
I love to cook! Cooking is a huge passion of mine, and I enjoy taking classic recipes and trying to make them healthy/lower calorie. I also enjoy a lot of outdoor activities, especially kayaking and hiking. When I’m not doing that I’m usually rolling dice and role-playing (D&D, usually, though I’ve also played the Marvel and Star Wars RPGs) or playing video games.

15-Do you have a website or a MySpace? Does anyone actually have a MySpace anymore?  I’m on Facebook (https://www.facebook.com/bellecherecostume) and all my photos can be found on Flickr (http://www.flickr.com/photos/bellechere/). 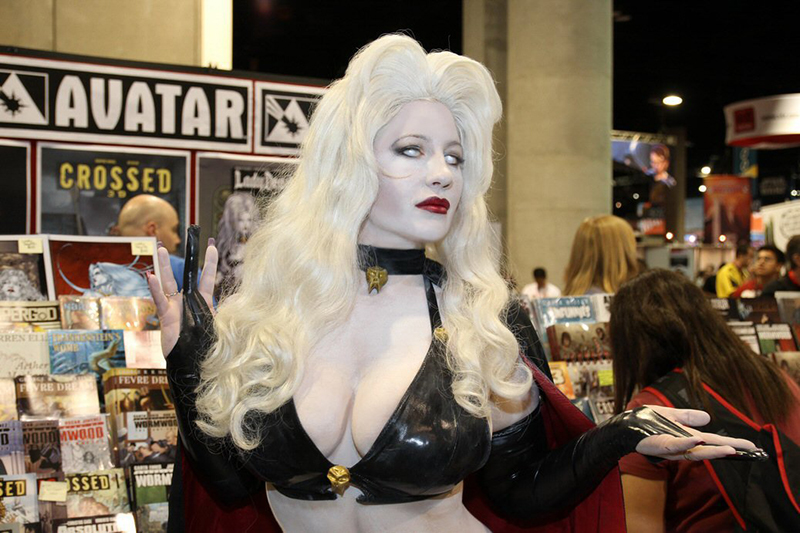