Cosplay Girl of the Month: April 2012

One of the features we do here at Comic Impact is the cosplay girl (NO anime, manga, role-playing games just comics) of the month, that’s right hot girls dressing up like your favorite super- hero characters. This month we’re privileged to have Catherine M. Fisher aka Cat aka BabyKitten  for this months Cosplay Girl of the Month!

1-What is your name?
Catherine M. Fisher aka Cat aka BabyKitten

2-How old are you?
Old enough to know better than to answer that question 😉

3-Do you read comics and if so, what are your favorite titles?
I’m a big fan of both Marvel and DC with Spiderman and Superman being my favorite superheroes.  I loved “Spiderman and his Amazing Friends” as a kid as well as the “Super Friends” (aka the Justice League of America to those unaware of the original series ).  And I love cartoons – I’m a HUGE fan of “The Simpsons”!!!

4-What is your favorite comic book character?
Poison Ivy without a doubt.  I’ve created two versions of her in the past and I have a couple of new ones in the works.  Harley Quinn and Emma Frost are tied for second.  For some strange reason, I’ve always been drawn to the super villains in comics as opposed to superheroes, hee hee hee.

5-Who are your favorite artists or writers?
It’s hard to choose because there are so many terrific artists out there but of course the late great Jack Kirby, George Perez and Frank Miller always immediately come to mind.

6-What got you into cosplay?
I’ve always been very artistic and I’ve been making my own costumes since I was in 4th grade (King Tut made out of paper mache and crepe paper).  I’d heard so much about Comic Con before moving here to San Diego and was excited to finally get to attend.  My first Comic Con was in 2005 when I entered the Masquerade as Aeon Flux.  I was instantly hooked and have been going ever since!

7-If you do more than one character which one is your favorite, and if you do only one do you have some ideas for more costumes?
I always like to come up with something new for each convention I go to but I do have some favorites that I’ll bring out of retirement every now and then.  It’s hard to choose because there are so many great comic and movie characters out there but I do have a couple that stand out as my personal favorites.  My Aeon Flux will always be in the top 5 of my favorites since that was the first one I ever made for a con.  Poison Ivy 2009 had a few thousand seed beads hand beaded on it so that labor of love is another favorite but my favorite costume that I’ve made for someone else is my true favorite costume of them all – I made Chewbacca for one of my friends last summer for SDCC’s Masquerade.  I put together a “Return of the Jedi” group and Chewie was my favorite even over my own slave Leia costume

8-How long does it take for you to make a costume?
Probably longer than it should, lol.  I’m friends with quite a few cosplayers and I’m often astounded at the short amount of time they say it takes them to put a costume together.  I tend to get really focused on certain details and want everything to come out just right so that lengthens the timeline for me.  I think that’s due to my experience in the Masquerade – you want the workmanship judge to take a good look at your costume and be impressed and that means putting in extra time. There are some things that I can whip out pretty quickly in a few hours but then I’ll do a costume that requires hours and hours of work every day.  Making chainmail for something like my Jadis battledress uniform from “The Lion, the Witch and the Wardrobe,” was

extremely time consuming as was my beaded Poison Ivy, but both of those were walks in the park compared to the 12 – 15 hours a day every day for two weeks latch hooking fur for Chewbacca’s jumpsuit this year.  But in the end, all the work is worth it when I see the finished product.

9-Have you met any of the artists or writers where your costume is based on their work? No, not yet.  I know quite a few people who have been fortunate enough to meet Stan “The Man” Lee but I haven’t had the pleasure thus far.  I have met some of the costume designers for some of my favorite movies though.  In 2010, designer Valerie Laven-Cooper gave me a Costume Designers Guild Hall Costume Award for my Poison Ivy and she said she’d worked with the late Robert Turturice, the designer for “Batman & Robin” (his design was my inspiration).  She said he would’ve been proud of my workmanship so that was pretty cool    I also got to meet Michael Wilkinson, the awesome designer behind “Tron: Legacy” and he also gave me a CDG award for Poison Ivy so I was psyched! 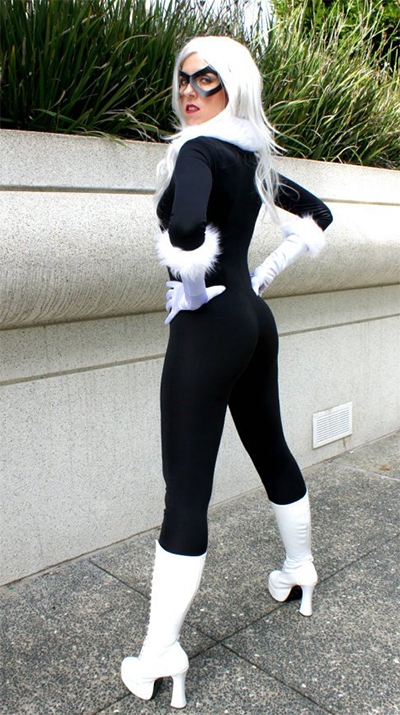 10-Do you buy any toys, busts and etc. based on some of your favorite costumes?
Not a whole lot but I have a few.  One of my favorites is a Harley Quinn Barbie that I got at SDCC a few years ago.  When I made my “Spicy Harley Quinn” version, I used that Barbie for a little inspiration, lol.  My favorite movie is “The Crow,” which inspired my Dark Angel costume, and I have a substantial amount of Crow memorabilia.  I went to a small comic book fair in Oceanside last fall and got some great action figures for a real steal ($2 a pop!) that I’m going to use as inspiration for some upcoming costumes.  I recreated the She-Spawn action figure for this year’s WonderCon Masquerade and won a prize for ‘Costuming Excellence’ so my original investment really paid off

11-So do people know you dress up like a comic book hero on your free time?
Oh yeah, everyone knows.  My cat Belmont even gets into the act on Halloween, heh heh heh.  My mom prefers the costumes where I’m more covered up like Marie Antoinette over Emma Frost or Aeon Flux

12-What is the funniest thing that has happened to you at a convention?
Hmm… nothing too funny or crazy has happened but this particular instance made me chuckle when I realized what happened after the fact.  It’s more of an ironic story than funny.  There’s a particular fellow cosplayer whom I’m friends with on Facebook and I was hoping to meet her in person last year at Comic Con.  I was swamped getting everything ready for my Masquerade entry and never saw her on the floor.  On the night of the Masquerade, I was walking back to the green room when I saw a gal in the best Quorra costume next to the real thing from “Tron: Legacy.”  I stopped for a moment to tell her how awesome I thought she looked and was then hustled off to the Masquerade green room by my den mother.  The next week, I saw pix of this awesome Quorra on Facebook and it was none other than the great Annisse Damefatale, the cosplayer/costumer I’d wanted to meet so badly (also September’s Cosplay Girl of the Month).  I posted on her page, “Hey, I had wanted to meet you at SDCC and I actually did, I just didn’t realize it when it happened, lol.”  I got to meet her in person at this year’s WonderCon since we were both in the Masquerade – she’s awesome!

13-Do kids come up to you and think you are the real life character?
Yes and I must say, I really get a kick out of posing with little kids for pictures.  One of my favorite con pix is when I was dressed in my Aeon Flux costume with a mini-Superman in his inflatable muscle suit.  Little girls tend to come up to me more when I’m wearing long colorful wigs and little boys come up to me most often when I’m showing a fair amount of leg.  Kind of like the big boys 😉

14-What do you like to do when you’re not costuming, such as other hobbies?
Costuming takes up the majority of my free time (I’ve got so many costumes in the works it’s not even funny!) so I don’t have a whole lot of other hobbies.  I spend a LOT of time surfing the internet doing research for costumes.  But every once in a blue moon I’ll go out dancing.

I also have my own “fan page” highlighting my costuming capers including a variety of costumes I’ve made for others: https://www.facebook.com/pages/Cat-Designs-Unlimited/103811789678761

And last but not least, I’ve got a web page: http://catdesignsunlimited.webs.com/

It’s nothing fancy but I’m working on it 😉

Feel free to send a friend request and say hi! 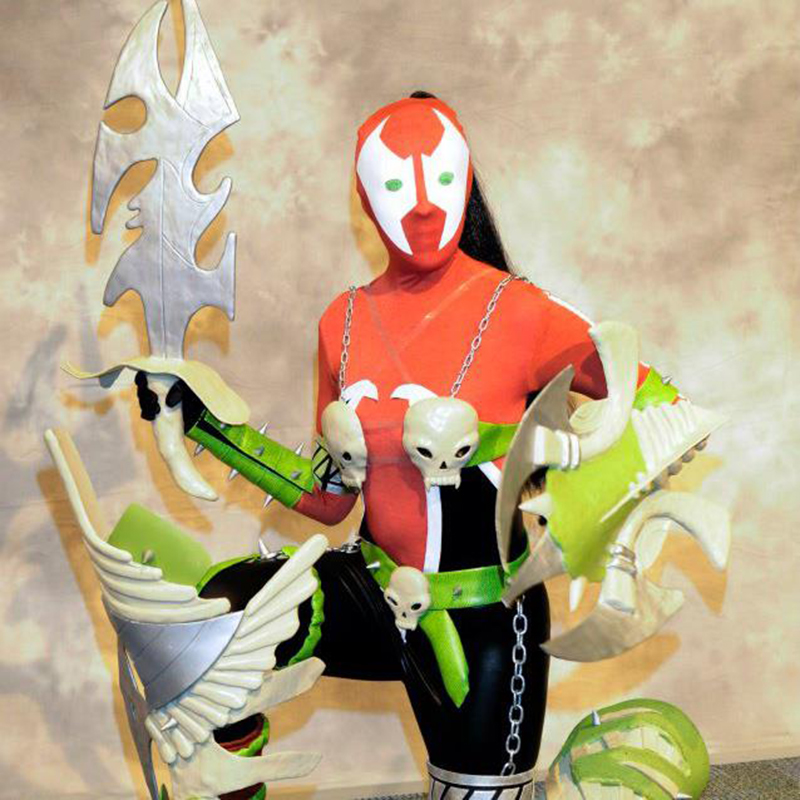