The first thing you will notice about this comic book is the cover. Duh. That’s the first thing you notice with any comic book. But look at this cover; it is simple but extremely effective. It catches the eye, it stands out, and it makes you look at it and pick it up and flip through it. A desire comes over you; you ask yourself, what is this comic? What is it about? I need to know more. Then you look at the cover, and it informs you of the creators, the issue, the price, the name of the story, and most importantly what the comic is about. It’s written their on its face. I think this comic offers the most unique covers of any comics, simple but effective. 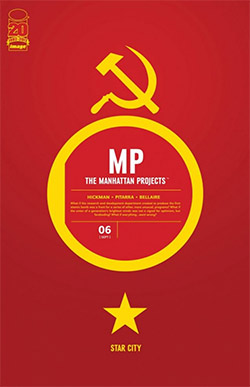 Then you actually read the comic and that’s where you get the pleasure. This issue tells the story of German scientist Helmutt Grottrup. Helmutt escapes from the Germans who want to continue where the Third Reich left off even after losing WWII. As Helmutt escapes he runs through a forest but trips on a tree root and falls down a hill right into the lap of Russians, who go on to capture him and use him for their own technological and scientific advances. And that’s all I’m going to say about the plot because I want you to read this unspoiled. The only thing I will say is that Helmutt’s story reads like Alexander and the Terrible, Horrible, No Good, Very Bad Day, except that Helmutt probably wishes it was a day because it’s really his life.

I know that when you read that it sounds awful, but my comparison to Alexander and his terrible day is not too far off because as you read this issue you can help but laugh at Helmutt’s misfortune. Though this comic is out there in its ideas involving world leaders, scientists, and the Earth’s history, it’s also one of the darkest and blackest comedies. I tell you this now because I want you read this comic.

Go back and buy the first trade and continue with this issue because I think knowing that it’s suppose to be darkly funny will help with the enjoyment of this comic book series. This is a different side of Hickman that you’re not use to seeing if you’ve only read his Marvel catalog. But I like seeing this side of Hickman because as funny as it is, it’s also insightful and there’s more going on in the overall story, there’s deeper meaning here that I hope to elaborate on with reviews of future issues.