I have not heard of either Ed Brisson or Michael Walsh and I hadn’t heard of this comic book either but the cover alone was compelling enough for me to pick up this comic and give it a shot. I didn’t really know what to expect with a title like Comeback and the cover being white and light blue didn’t really give me any ideas. After reading the first issue I will tell you that I will be back for the rest of the series because this comic has a lot of different aspects that appeal to me as a reader. 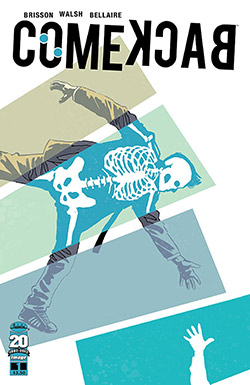 The comic follows partners Mark and Seth as they seemingly break into an old man’s house. They knock him out and kidnap him, the old man complains but Mark reassures him that they aren’t going to hurt him, that in fact they are saving his life. Which to me, I thought, whatever, I’ve seen this before, but it turns out that they weren’t lying and they take him to this room where there’s a safe, they go into the safe and it turns out that Mark and the old man have traveled 62 days into the future. But things go horribly wrong as the old man explodes right in front of Mark.

And that takes us through the first eight pages of the comic and I was already sold. I like stories that start like something we’ve all seen a million times before but then turns it on its head with something unexpected and I’ll tell you, I was not expecting time travel. So as that is reveal I was hooked. I am a fan of private investigators or cleaners with a twist and I think using time travel as a paid service to keep people from being killed by chance or on purpose is pretty cool. The comic reminded me of the movie Looper that came out a few months ago, which I loved.

There’s more to this comic than just the concept, it is very well written and it has a way of making this world believable, believable in the sense that it doesn’t hinge on shoving the time travel stuff down your throat and making the comic all about that. It takes its time to have character moments, especially with the two leads in Mark and Seth. Seth is noticeably exhausted with this job and the drain that it causes so much so that he tells Mark and their next job will be his last. The scene between them in the comic is more than just concern over a co-worker but concern over a friend and you get a sense of history between them, in this scene and in the opening scene where they’re just going through the motions of completing a job.

I also liked that it wasn’t just about time travel, it’s there but it’s not the focus. There are little tidbits that slip in dialogue and I like that we’ll be finding out the rules as we go along. The art is fantastic and it is reminiscent of the current style of noir in comics following on the heels of Phillips, Lark, and Zonjic. But except of being darkly colored and heavily inked and relying on shadows it actually does the opposite, it’s brightly colored which adds to the regular everyday atmosphere. It’s a great package and a great comic. Check it out.