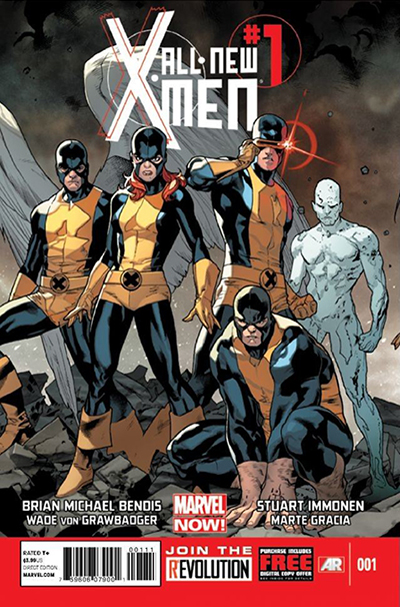 When I first heard that this comic was happening and that the creative team behind it would be Brian Bendis and Stuart Immonen my first thought was “FUCK YES!” There was absolutely no doubt in my mind that this comic was going to be awesome and that this creative was going to kill on this book. Bendis was written X-Men characters before in Avengers and the yearly crossover events that Marvel has done but he hasn’t written an X-Men book in the Marvel Universe before so I was excited to see where he would take these characters.

If you’ve been living under a rock these last few months then you know about the fallout of Avengers vs. X-Men. There are a lot of story ideas coming out of the event. One of them being that new mutants are appearing again all over the world, something that hasn’t happened in the Marvel Universe since Scarlet Witch uttered those famous words in House of M. The X-Men are currently separated in what they believe the future of mutant kind should be headed. Wolverine is on one side trying to protect the future of mutants and trying to keep them alive in a world where they might he hated more than ever and Cyclops, having just escaped custody for his crimes against humanity, feels that mutants should not bow to the whims of humans and their governments and wants to create a place where mutants will not just survive but thrive.

The X-Men are at odds with each other where each member has taken a side, a stance and will do anything to preserve their beliefs. In comes one of the original X-Men Beast and what he calls a last ditch effort, one last chance, a no choice situation, where they only thing he can do is bring the X-Men of the past and show them what they become to perhaps change the future and stop things from going down the road that they are headed in. If he can make Cyclops see what he becomes then maybe everything will work out.

What I really liked about this issue is the introduction of new mutants and Cyclops and his team, of Emma, Magneto, and Magik going after them to recruit them, which I would like to point out that Wolverine’s team isn’t doing, and I hope that somewhere down the line that gets answered because that is an important issue and it is something that they should be doing, as so they are not ‘corrupted’ by Cyclops’ team.

Another issue that wasn’t made entirely clear is what exactly is going on with Beast. He is suffering from another mutation that he might not survive. It is made pretty clear that Beast is on the last days of his life and he doesn’t know how to stop the mutation and that he’ll die, and he uses that as an excuse to right some wrongs and justify to himself and his teammates why he goes back in time to grab the X-Men from the past.

Stuart Immonen is doing some of the best work I have seen him do in his career at Marvel. Bendis has always said that he writes to an artist’s strengths and this book really shows it. Immonen is able to capture everything so well from the action, to the iconic look of the X-Men. A page where Cyclops, Magneto, and Emma are coming to save a young girl who just found out she’s a mutant just explodes off the page making these characters bigger than life. Immonen is also great at drawing facial expressions from confusion and anger and distress. It is just beautiful work.

I am very excited to see where this comic goes story wise in the future. I have so many questions. Will the past X-Men be here to stay? What the fuck is going on with Beast? What’s going to happen when the two different Cyclops meet? What’s going to happen when Wolverine sees Jean? How will Professor Xavier come into play? (That is just an assumption on my part, but it is the X-Men and Xavier will have to come into play at some point.) Where do the teams go once this initial arc is over and Uncanny X-Men launches? How are all the past X-Men going to deal with their future counterparts? And I’m sure I can ask a whole bunch more. I’m just so pumped about this comic and having Bendis be part of the X-Men in the Marvel Universe going into the future is just so fucking awesome.